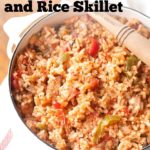 Between the polar vortex that has had Toronto collectively shivering for the past couple weeks, and my regularly scheduled bout of the February blues, it's really no wonder that I've had a near-constant craving for comfort food.

And after getting two snowstorms in under a week, I'm going to have to call in the big guns, because this is a job for heavy-duty, extra-strength comfort.

I'm talking about the kind of meal that's packed full of feel-good carbs, and simple but satisfying flavours. If it's quick and requires minimal effort to throw together, even better.

The good news is that this flavourful Creole-inspired skillet checks all those boxes, and then some.

It's deceptively simple, but the combination of saucy tomato rice, bell peppers and sausage delivers plenty of flavour, along with some gentle belly-warming heat.

Cajun vs Creole: What's the Difference?

While both Cajun and Creole cuisines come from Louisiana and share some common elements, there are some important differences.

Creole food was introduced by the wealthy families who settled in New Orleans, and needed to adapt their French and Spanish cuisine for a new continent.

While it still has a strong European influence, it also borrows New World ingredients such as tomatoes and peppers from the local Indigeous cultures, and flavours and techniques from West African and Afro-Caribbean slaves.

A typical Creole seasoning blend consists of herbs like oregano, basil and thyme, along with paprika for colour, and black and white peppers for mild heat.

Cajun food came a little later, when Acadian families who were deported from Canada during le grand derangement settled in southern Louisiana.

Like their Creole counterparts, the newly arrived Acadians adapted to their new home by borrowing ingredients and techniques from the local cultures. It's hearty country food that's meant to make the most of available ingredients, like crawfish and boudin.

A typical Cajun seasoning blend also uses a base of paprika, but uses less herbs and introduces bolder flavours like garlic powder and cayenne.

If you like things spicy, feel free to use Cajun spice instead of Creole spice when making this recipe.

Cajun Shrimp and Rice Skillet: Omit the sausage, and use Cajun seasoning instead of Creole. Sautee ½ lb shelled raw shrimp in a little olive oil until just barely opaque, and stir into the finished rice just before serving.

Mexican Chicken and Rice Skillet: Substitute 2 cups diced cooked chicken for the sausage, and chili powder for the Creole seasoning. Add 1 small can (127ml / 4 oz) of diced green chilies along with the tomatoes. Finish with a sprinkle of fresh cilantro.

Portuguese Chourico and Rice Skillet: Substitute chourico (or Spanish-style chorizo) for the andouille, and paprika (mild or hot) for the Creole spice. 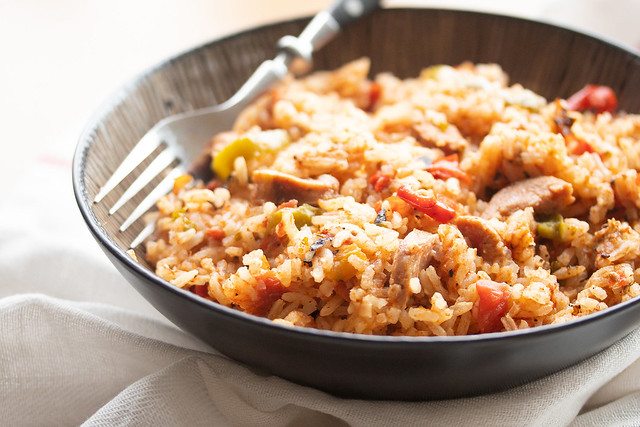 I'm glad to report that a big bowl of this saucy rice delivered just the right amount of comfort to put my cravings to rest.

However, if you've really got a serious craving that requires a double dose, here are a few more options to help you scratch that itch:

A hearty and satisfying combination of saucy tomato rice, bell peppers and smoked pork sausage makes this a one-pot meal the perfect comfort food fix. If you like it spicy, feel free to add a few dashes of Tabasco sauce.