I sort of started a tradition of bad puns in lamb shank posts last year, so it would be a shame not to carry on with that. Besides... The Boy isn't even home tonight, so no one has to listen to him groaning loudly over my terrible punnage. 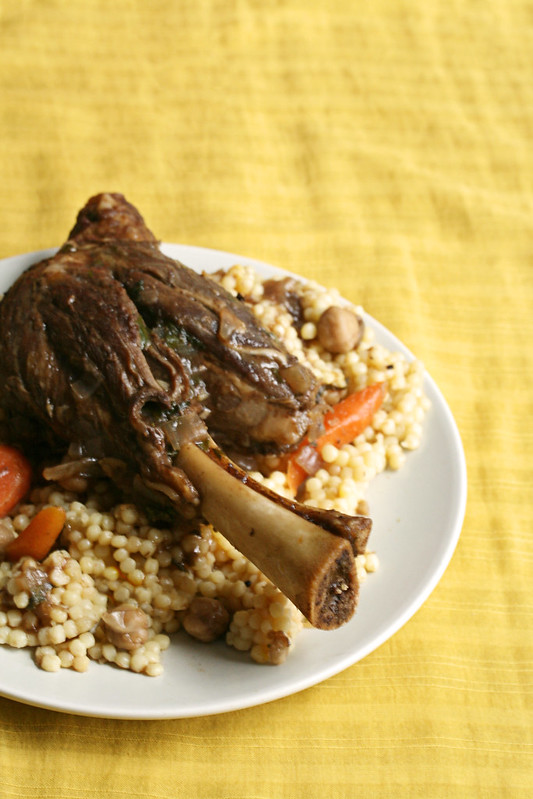 Over time, I've adapted it bit by bit, first by switching over to lamb shanks instead of cubed lamb stew meat, and then by adding a dash of cumin and a pinch of saffron to the sauce for a little extra Middle Eastern flair.

The essential character of the dish remains unchanged, though. It's still got fall-off-the-bone tender lamb, tender chickpeas and carrots, loads of gorgeous silky sauce flavoured with sweet-and-sour pomegranate molasses, and a vibrant punch of mint and cilantro stirred in right at the end to cut through the richness.

The best part of making this dish is that the shanks make it swank enough for a casual dinner party, but it's still simple and homey enough (not to mention, affordable enough) to make for a simple weekend dinner.

What to Serve with Braised Lamb Shanks

I usually serve these shanks on top of saffron-infused couscous pilaf. Either the fine-grained North African style and the larger pearl-sized Israeli couscous will do, so just go with what's easiest for you.

(Personally, I'm quite partial to the toothsome grains of the Israeli style, especially in saucy dishes like this one.)

Regardless of which kind of couscous you're using, the technique remains the same: prepare per package directions using a combination of half chicken broth and half water, along with a generous pinch of crumbled saffron threads and a dash of turmeric.

These fall-off-the-bone tender lamb shanks are paired with chickpeas, carrots, and downright delicious sauce flavoured with tangy pomegranate molasses, aromatic saffron, and fresh mint and cilantro. Pair with cooked rice or couscous for a company-worthy dish.