OK, it's kind of dorky to get excited about Pi Day, but you have to admit that it's rather nice to have an excuse to spend a whole day thinking about pie, baking pie, eating pie and doing other pie-related things.

If only everything math-related was this yummy, I might have gotten some half-decent marks in high school algebra. Besides, it's also a perfect excuse to post a recipe I've been meaning to talk about for a while - a traditional French-Canadian tourtiere. 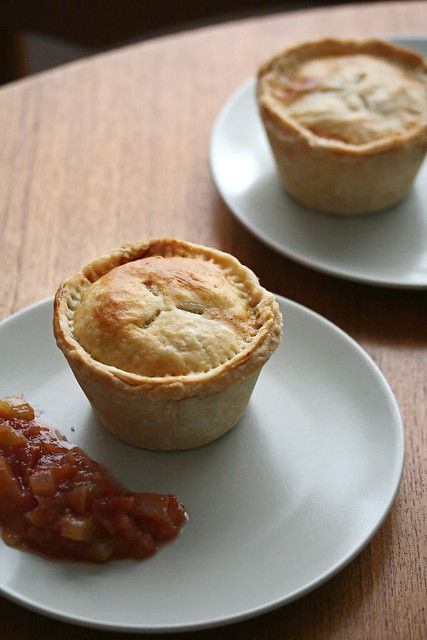 Tourtiere is a meat pie prepared from a combination of ground meats (usually pork, beef and veal) that's usually served on Christmas Eve in French-Canadian households during the big holiday feast we call the réveillon.

If you ask me, though, something this delicious really deserves to be served a lot more often than just once a year - especially since it's actually much easier to make than you'd think. So this Pi Day, I'm starting a new tradition of my own.

In keeping with my new-school approach, I've taken my family recipe for a full-sized 9" tourtiere, and scaled it down into individual mini-pies using a jumbo muffin tin (and here you thought it was just good for muffins... surprise!).

If you'd rather go old-school, though, you can make two regular-sized deep dish pie crusts instead and go on from there.

In our family, we always serve tourtiere with my Tante Yolaine's sweet-and-sour chunky ketchup, also known as "chow-chow". It provides a much-needed tangy counterpoint to the tourtiere's rich meatiness, as well as a pop of bright colour to an otherwise pretty monochromatic plate.

It's perfectly delicious on the day it's made, but it's even better after a day or two to let the flavours mellow, so if at all possible I suggest preparing your chow-chow in advance .

A word of warning... You'll end up with a metric bucket-load of ketchup, but fear not, it makes a great condiment for lots of other dishes where you'd normally use a store-bought ketchup. I like to spoon it onto meatloaf or burgers, or puree it to serve with dippables like fries or grilled cheese.

My family's authentic recipe for French-Canadian meat pie, scaled down into adorable individual mini-pies, plus a sweet-and-tangy homemade ketchup for spooning on top.

Assemble and Bake the Pies: