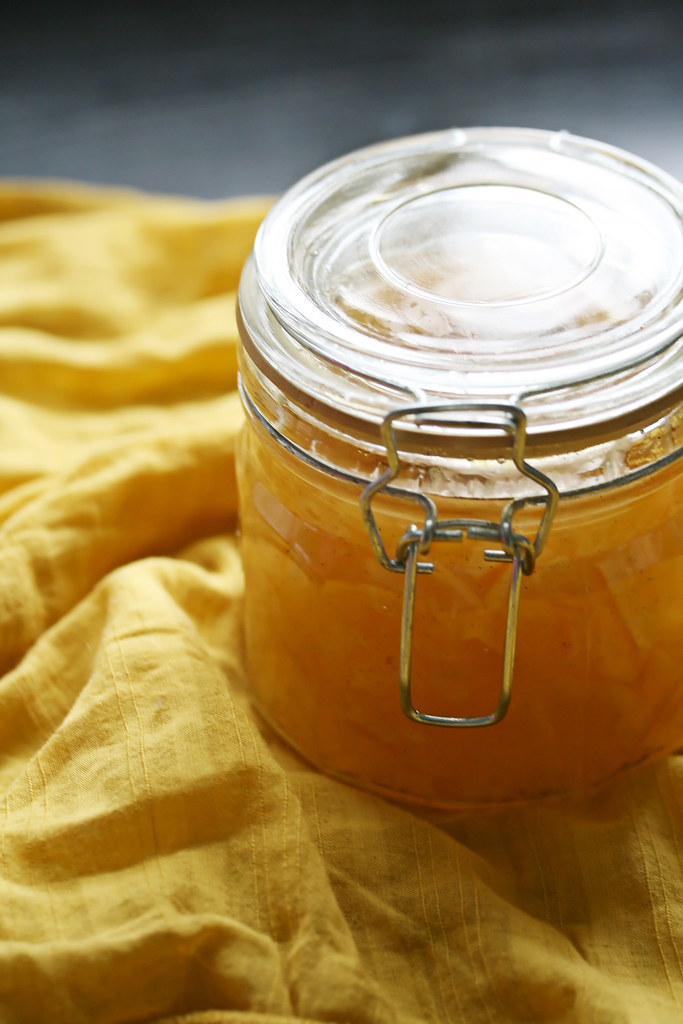 Remember how excited I got about stumbling over a bag of Meyer lemons just a couple of months ago?

Well, either the gods have smiled upon me, or it's just that this is the year that Meyer fever finally hits Toronto... but now that citrus season is in full swing, it's become surprisingly easy to find them. They're not ubiquitous yet (and they're still on the expensive side), but at least I don't have to plan a trip clear across town just to get my hands on these precious little fruits any more.

Since we'd just polished off the last of the Blood Orange Marmalade from last year's jam-making extravaganza, I decided it was time to make some more marmalade - Meyer Lemon and Vanilla Bean Marmalade, to be precise, inspired by a recipe in one of my old Gourmet magazines.

I'm quite pleased with the results. The vanilla flavour is quite noticeable, and provides a perfect complement for the fragrant floral quality of the Meyers. Once the initial blast of vanilla passes, you're left with a balanced combination of tart, bitter and sweet which any proper marmalade ought to have. Plus it's just gorgeous to look at, with its sunshiny yellow colour flecked all over with shreds of bright yellow peel and specks of black vanila seeds.

I used this basic recipe for Meyer Lemon Marmalade as a jump-off point, making very few changes beyond halving all the quantities, since I didn't have enough jam jars (or lemons, for that matter) on hand for a full batch, and including an overnight soak to soften up the peels, since that's my usual habit with marmalades.

Cut the lemons into halves lengthwise. Using a sharp paring knife, cut off the top and bottom ends, then cut away any white pith in the centre. Set the end bits and the pith in a small bowl - don't discard, as you'll be using these later.
Cut each lemon half into four wedges. Remove seeds; add these to the pit and end bits that you've reserved.
Slice each lemon wedge cross-wise into thin slices, and place in a large non-reactive mixing bowl.
Wrap up the seeds, pith and end bits in two layers of cheesecloth and tie off with cotton twine to make a neat parcel. Place this bundle in the bowl of lemon slices. Cover bowl tightly with plastic wrap and refrigerate for 24 hours. (Don't rush this step - the day-long soaking releases a lot of the natural pectin contained in the lemons, and also softens the peels so that you won't have to cook them as long)
The next day, pour the contents of the bowl into a large non-reactive saucepan. Slice the vanilla bean open and scrape out the seeds using a sharp knife. Stir the seeds into the lemon mixture, along with the spent bean.
Bring to a boil over medium-high heat and cook, stirring often, until lemons are tender, about 20-25 minutes. Remove from heat. Pull the cheesecloth pouch and the vanilla bean out of the pot, and set them aside for later.
Once the cheesecloth pouch is cool enough to handle, gently squeeze it to extract the pectin (it will look like a thick whitish goo). Stir the pectin into the lemon mixture, along with sugar.
Return mixture to the stovetop. Bring to a rolling boil over medium-high heat, and cook, stirring frequently, until the jam reaches its jelling point.
Immediately ladle the jar into sterilized glass jars. If desired, cut the reserved vanilla bean into segments and place a small piece of bean in each of the jars (I have no idea if does anything to intensify the vanilla flavour, but it's quite pretty to look at!)
Once cooled, the jars can be stored in the refrigerator for up to a month. If longer storage is desired, process the jars immediately in a boiling water bath for 15 minutes, after which they can be stored for up to a year in a cool, dry place.

« Getting Soup From a Stone - Winter Minestrone
Braised Be The Lamb: Lamb Shanks with Pomegranate and Chickpeas »
24 shares