Maybe it's because there isn't a speck of Irish blood in my veins, but I have to admit that I just don't get the hullabaloo over St Patrick's Day. 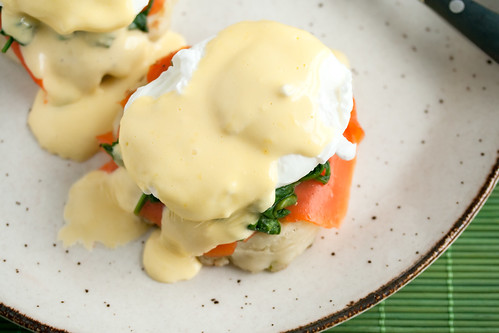 There was a time, back when I was a twenty-something youngster, when St Patrick's Day usually meant sneaking out of work early to grab a table at the nearest pub.

Once there, we'd consume plate after plate of Irish nachos (a surprisingly tasty concoction made from waffle-cut fries topped with cheddar, green onions, tomatoes, bacon and sour cream), chug several pints of green beer, and then eventually stumble home through a minefield of green barf.  Good times.

But now I'm an thirty-something old fart. A single pint of green beer gets me jolly and a second pint puts me under the table, so I have to settle for a slightly more low-key option if I want to celebrate.

Something like... say... a big ol' plate of Eggs St Patrick, which is what I've decided to call my Irish-inspired twist on classic Eggs Benedict (because while Benedict is a perfectly lovely name and all, it's not all that Irish at all). 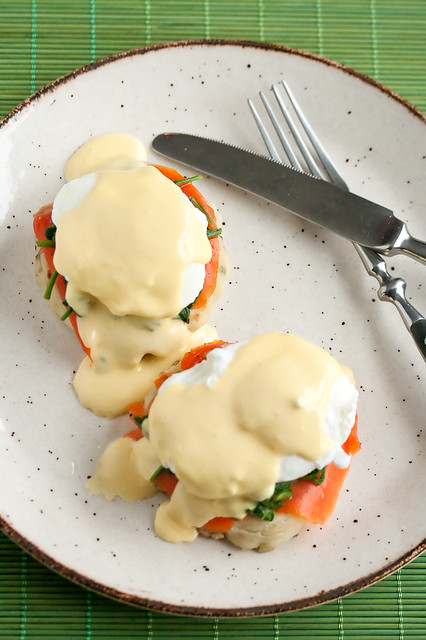 Eggs Benny with an Irish Twist

Then, I topped off the boxty with a little smoked salmon, since Ireland is well known for making a mighty fine smoked salmon (though mine is admittedly Canadian, because that's what I could get), and added a little sauteed spinach for a little splash of St Patty's Day green.

And then, a wobbly-yolked poached egg and a generous ladleful of blender Hollandaise sauce finish it all off, since it's not a Benny without them. 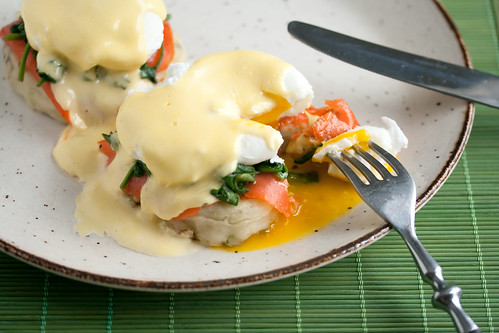 Yeah, I'll admit, it's hardly an authentic Irish recipe if you're inclined to be a purist... but then again, I'm pretty sure Irish nachos and green beer aren't all that authentic either.

And, unlike those pitchers of green beer, there's absolutely no hangover to worry about the next day. Which, when you're old and boring like me, sounds like a pretty damn good way to celebrate St Patrick's Day (or any other day, for that matter).

Shake up your brunch routine with this Irish-inspired twist on Eggs Benedict, made with golden-crisp potato cakes, sauteed spinach, smoked salmon, poached eggs and Hollandaise sauce.

Prepare the Boxty (make up to 1 day in advance):

Prepare the Hollandaise (make up to 1 day in advance):

Poach the Eggs (make up to 3 hours ahead):

This post is part of the St Patrick's Day Recipes exchange organized by Jen of Jen's Favourite Cookies.  For more fabulous St Patty's Day goodies, check out the rest of the posts: