To borrow a phrase from the lovely and talented Kelly Bakes, I often eat my feelings. Bad days are dealt with by gobbling down the most carbo-riffic food I can possibly get my hands on. 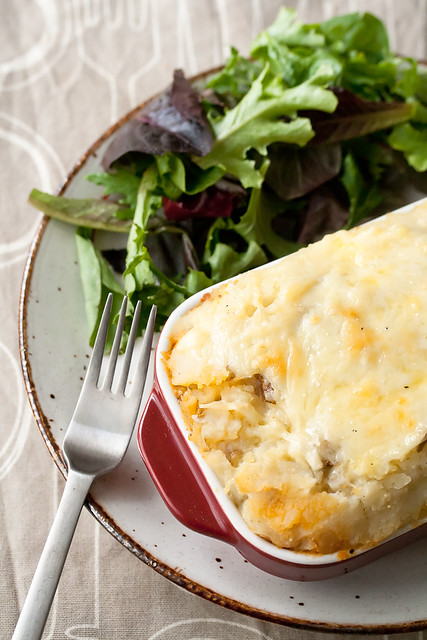 Most people turn to sweets to lift them out of a blue funk, but my go-to is mashed potatoes.

I'm sure science will one day uncover the fact that potatoes are endowed with magical mood-lifting properties, because even when I'm having a day so rotten I can't even bear to cook, everything gets better once I've cobbled together a bowl of lumpy, creamy, buttery mashed potatoes.

When I do have the energy to drag my butt into the kitchen to make something, though, nothing can compare to a piping hot plate of shepherd's pie. That perfect trifecta of creamy mashed potatoes, hearty flavours and childhood nostalgia never fails to lift my spirits. 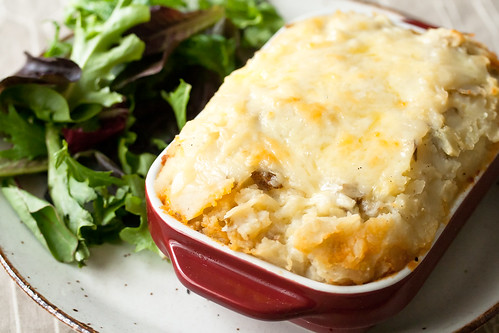 Mind you, what I grew up calling Shepherd's Pie wasn't the traditional British version with peas and carrots and gravy, but rather a uniquely French-Canadian variation that's better known as Pate Chinois.

If you're not familiar with it, Pate Chinois is basically a stripped down take on Shepherd's Pie, with three distinct layers of ground beef seasoned with dried savoury, corn niblets, and mashed potatoes. 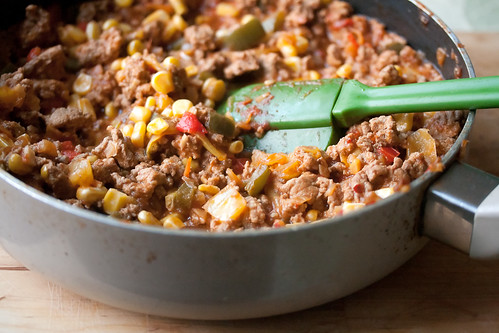 If you've ever taken French in school, you're probably scratching your head a little right now, since "pate chinois" literally means "Chinese pie", and there's nothing even remotely Chinese about that dish.

The origins of the name are hazy, but one possible explanation according to Wikipedia is that it came from French-Canadian railway workers, who learned to make this dish from the Chinese cooks who prepared their meals. Sounds outlandish, but I suppose anything's possible. 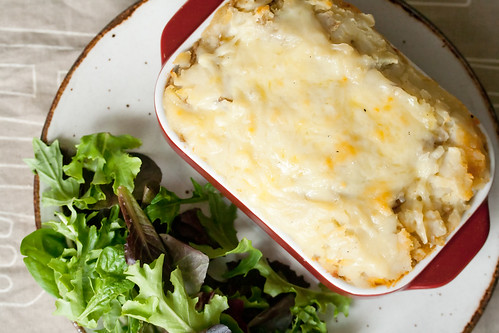 The recipe I learned to make from my mother helped me through many a failed university exam, broken heart, botched interview, bad workday and a hundred other crappy days.

As much as I go back to it when I need a pick-me-up, though, it's also nice to shake things up sometimes - especially now that I've gotten into the habit of cramming as many vegetables as possible into my meals.

That's why I ended up concocting this Southwest-inspired version, with a saucy filling dotted with a colourful confetti of peppers and corn and tomatoes, and a smashed potato topping that gets a nutritious boost of fiber from the potato skins I leave on (mostly because I'm too lazy to peel potatoes).

It's all the heartwarming goodness of my childhood favourite, but just a little bit better for me. 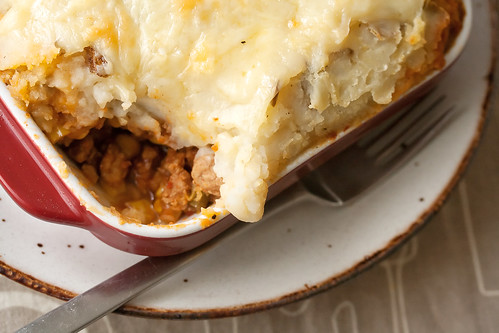 Sure, it's still topped with a layer of gooey melted cheese, but life's all about balance.

And when it's been a generally miserable kind of day, it still hits the spot, in the way that only a big piping hot plate of shepherd's pie ever can.

Shepherd's pie gets a healthy makeover with a southwestern-inspired lean turkey filling chock-full of colourful vegetables and bold seasoning.