Oh look, it's the first Monday of the month. Do you know what that means?

Yup, it's time for the Secret Recipe Club again!

(On a slightly related note, where the hell did February go? It feels like the past four weeks just zoomed by at light speed.) 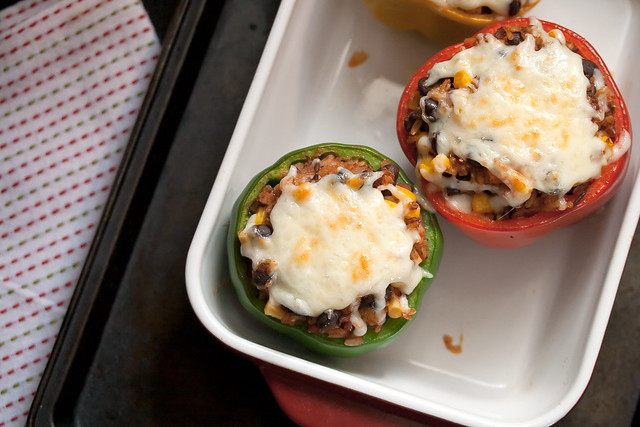 My SRC assignment for this month is Melissa, who blogs over at I Was Born to Cook.

The blog's name is a reference to Melissa's Greek and Italian roots, and if the looooooong list of recipes in her Recipe Box is anything to go by, she 's doing a pretty bang-up job of living up to that name.

As usual, picking just one recipe was a challenge.

There were tons of delicious-looking treats that caught my eye as I browsed around Melissa's blog, but after last month's Nutella Granola pig-out (and given that I still need to fit into my wedding dress in 3 months... yikes!), I was determined to make something healthy this month. 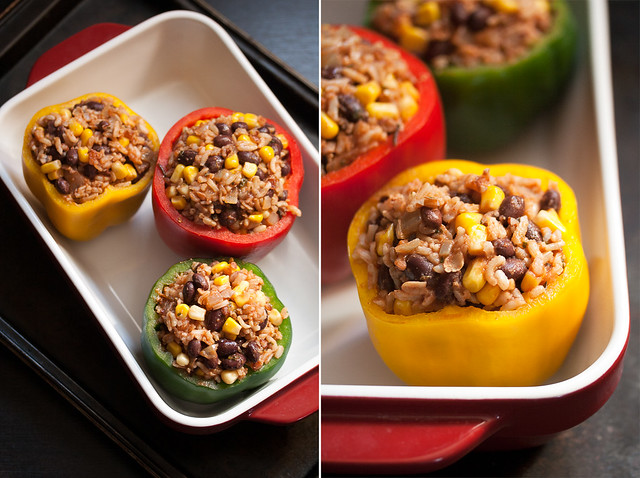 Lucky for me, Melissa has quite a few healthy meals in her repertoire, and I ended up spending a little while debating between the Mexican Egg White Omelets, the Blueberry Multigrain Pancakes, the Baked Quinoa with Chicken Sausage and Spinach, and the Chipotle Turkey Meatloaf.

In the end, though, it was these Meatless Mexican Stuffed Peppers - a hearty vegetarian main dish of stuffed peppers filled with brown rice, black beans and corn - that really caught my attention. 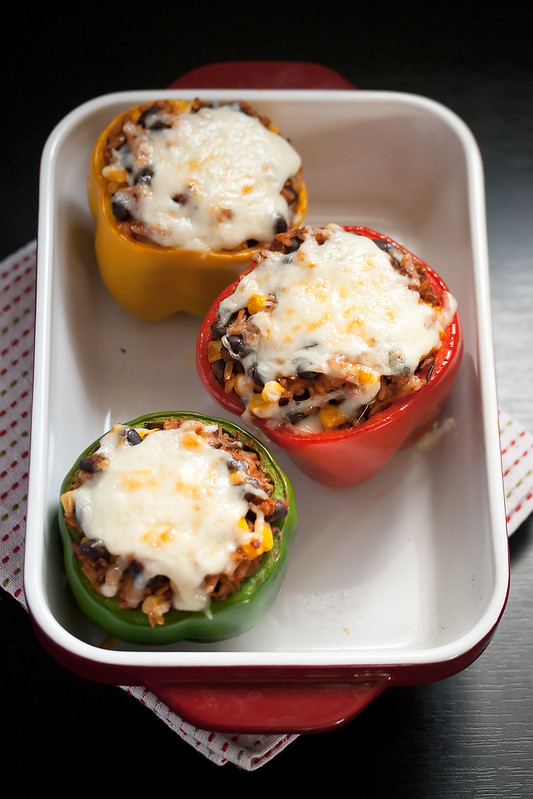 How I Made This Recipe My Own

While the original version looked plenty delicious, I did make a few small tweaks to suit our tastes.

I used fresh cilantro instead of dried, added a cup of tomato puree for a saucier filling, used frozen corn instead of canned, and added a dash of hot sauce to give it some oomph. I also kept the peppers whole instead of slicing them in half.

Next time, I'm going to parboil the peppers for 3-5 minutes before stuffing, since they did come out a little crunchy even after half an hour in the oven. Other than that, though, these were pure perfection.

(Update: I've re-made this recipe a few times since I first posted it, and parboiling is DEFINITELY the way to do it. I've updated the recipe to add this step, though you can omit if you like your peppers on the crunchy side.) 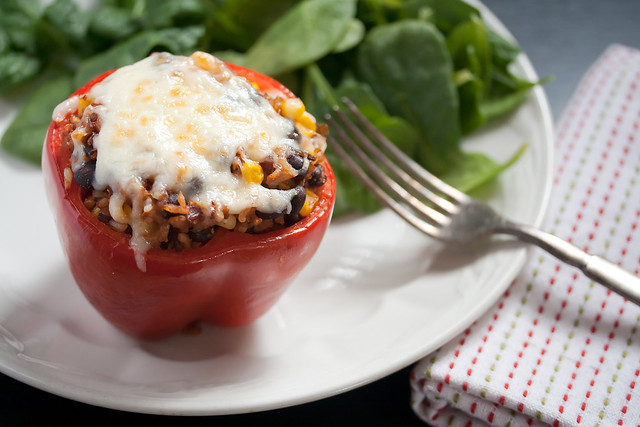 This recipe will definitely be going into my regular rotation! It's not often that I find a healthy vegetarian recipe that also happens to be delicious, but these stuffed peppers absolutely knock it out of the park in the flavour department.

The peppers are hearty enough that they're pretty much a meal on their own, though I ended up serving them with a simple baby spinach salad just to round things out

And did I mention how super-easy they were?

While it's pretty easy to make everything on the day of, you can easily throw these together on a busy weeknight if you prep the filling a day or two ahead of time, so that all you need to do on the day of is fill the peppers and pop them into the oven/

After wolfing down a couple of these peppers, I've come to two conclusions. One, Melissa was definitely born to cook, and two, these peppers were made to be devoured.

This quick and easy meatless main dish is full of flavour, not to mention loads of heart-healthy fiber and protein.