Seems like Oscar weekend totally snuck up on me this year.

Thankfully, I have a mental list of super-fast, super-easy finger foods that I can easily whip up with minimal notice. 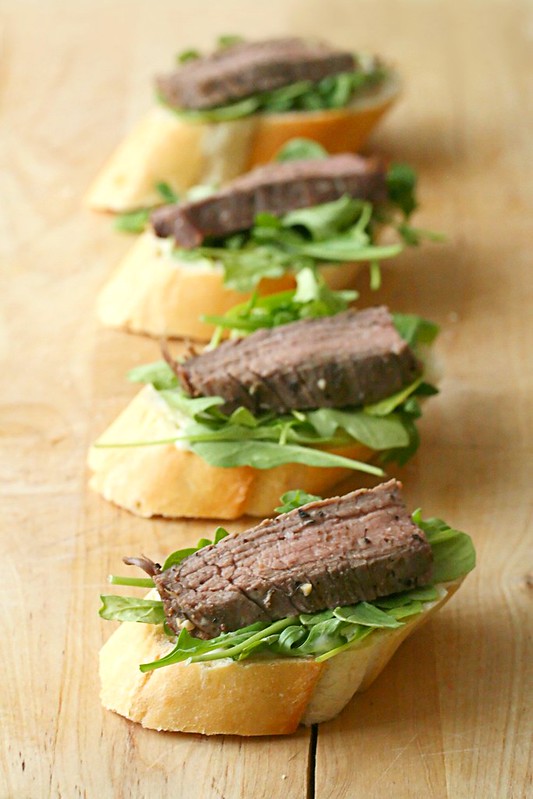 As a matter of fact, most of the finger foods and canapes I make are super-fast and super-easy.

My philosophy when it comes to prepping for a party is that everything on the menu should be something I can either prepare well in advance or quickly assemble at the last minute.

Otherwise, I'm not interested... I want to spend my time enjoying my party, not futzing with canapes in the kitchen.

On the other hand, I absolutely refuse to sacrifice taste for the sake of convenience. Most appetizers may be just a bite or two, but that means those two bites have to make one hell of a good impression.

These little open-faced steak sandwiches, on the other had, are anything but gross. 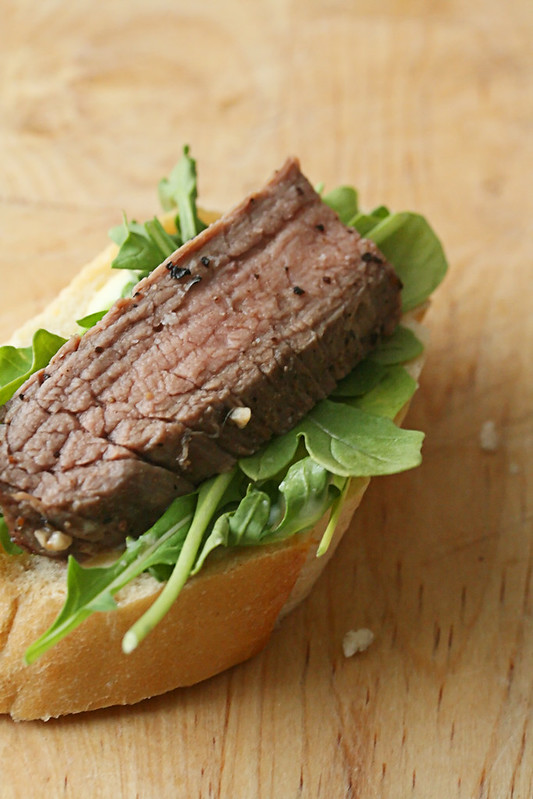 Flank Steak Crostini, a Perfect Combo of Easy and Delicious

If these little toasts with medium-rare flank steak, peppery arugula and zippy horseradish aioli were a building, they'd be right on the intersection of Easy and Delicious.

Once the aioli is prepared and the steak is broiled, the rest of the prep is dead simple. Which is good, because they'll probably be flying off the plate almost as quickly as you can make them.

Depending on how many slices you can get out of your baguette, you'll likely end up with some leftover flank steak. If you do, consider it an excuse to make a Black and Blue Flank Steak Salad to reward yourself for a job well done. Or just make some steak sandwiches with the leftover aioli, as there will likely be some of that as well.

Now if only I could find something to wear that's just as easy and elegant... anyone have suggestions for an outfit that combines the comfort of yoga pants with the glamour of an evening gown? Yeah, me neither.

Food Safety Note: This aioli is made with raw eggs, which is traditional but may not be suitable for pregnant people, young children or anyone who's squicked out by raw eggs. If you prefer to play it safe, you can make a safer aioli by adding the crushed garlic and horseradish to ¼ cup of store-bought mayonnaise.

Cooking the Flank Steak: I've used the broiler here for the sake of simplicity, but in warmer weather, feel free to cook the steak on the grill until medium-rare.