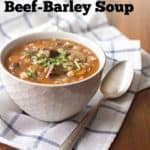 Lately I've been wondering why we bother to distinguish between soup and stew, particularly when it comes to recipes like this beef and barley soup, which is so thick and chunky that you can almost eat it with a fork. 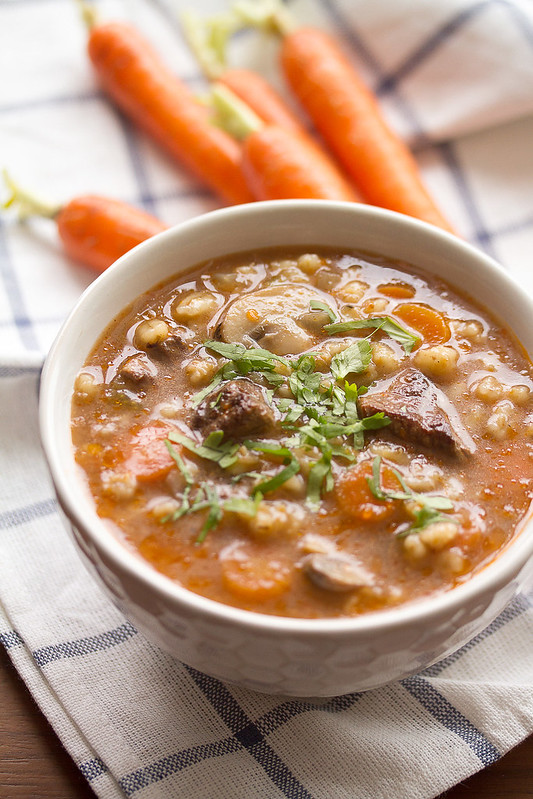 On the one hand, it's got all the hallmarks of a great stew - chunks of tender beef, thick sliced mushrooms, and carrots.

On the other hand, it's also clearly a soup, because all of those tasty chunks are floating around in a flavourful, rich beef broth thickened with barley.

I'm going to go ahead call this a soup, but feel free to call it a stew if that's what makes sense to you. Who needs labels anyway, man?

Slow Food Made Faster in the Instant Pot

Old-fashioned recipes for beef and barley soup can take up to 3 hours from beginning to end, which is great if you're planning on spending an afternoon at home while the soup simmers away on the stovetop.

And believe me, I've done that plenty of times, because it's pretty satisfying to sit in a warm house full of delicious smells when it's miserable and cold outside.

But sometimes you find yourself walking in the door at 6pm on a Wednesday evening with a major craving for beef and barley soup. The Instant Pot is a life saver on nights like those, because it lets you get the exact same results in just under an hour, including the time required for the cooker to come up to pressure! 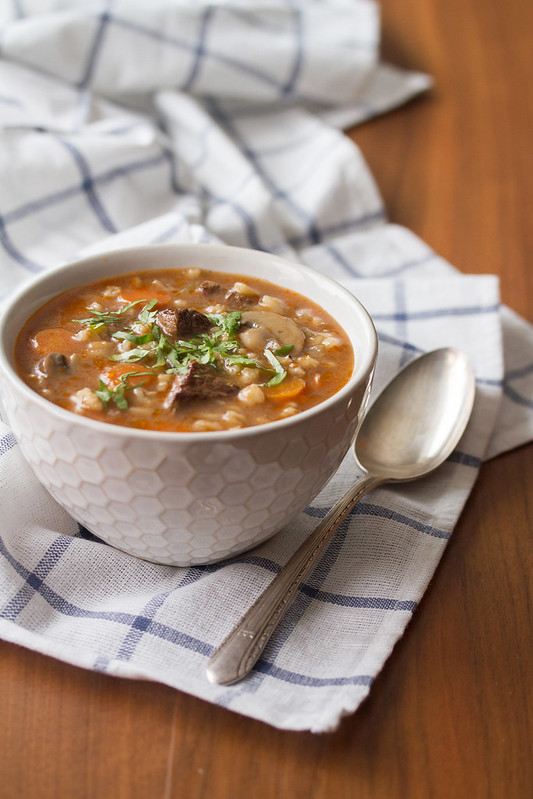 Pot vs Pearled: Know Your Barley

While many recipes for beef and barley soup use pearled barley, I much prefer to use pot barley (or hulled barley, as it's sometimes called outside of Canada).

What's the difference? Both pot barley and pearl barley have been hulled, meaning the outer layer of the grain (also known as the hull has been removed, which is important since barley hull is very tough and inedible.

Pot barley is polished for a shorter period of time, which leaves behind the bran layer that's directly below the hull. This gives it a slightly nuttier flavour and chewier texture, which I personally really enjoy when I'm making a hearty soup/stew or a quick barley pilaf.

Pearl barley, on the other hand, goes through a few extra rounds of polishing to remove both the hull and the bran layer. As a result, it's much whiter and cooks up softer than pot barley. It also absorbs more liquid than pot barley, so you may need to add a splash of extra broth when reheating leftovers.

The good news is that both varieties cook in the same amount of time, so they're totally interchangeable.

In other words, if you've got pearl barley kicking around, go ahead and use it instead. It'll still be perfectly delicious! 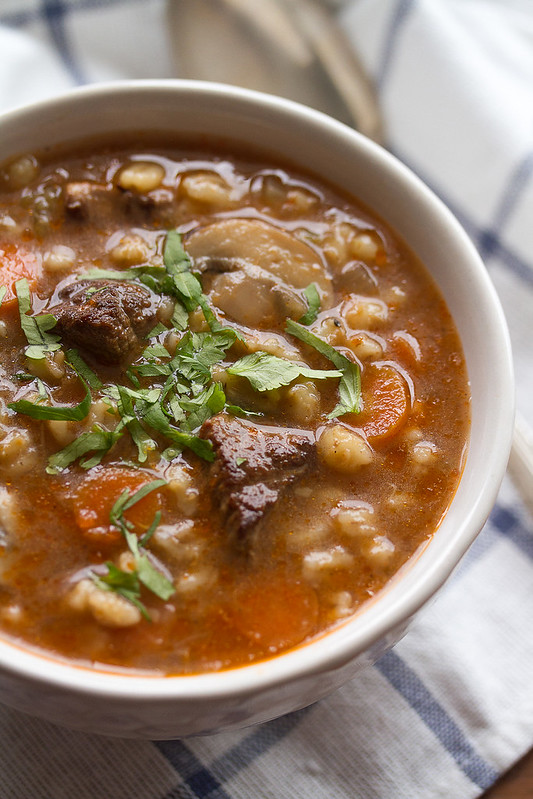 While I've written this recipe to use beef stew meat, it is absolutely possible to make it with leftover roast beef or pot roast.

In fact, that's actually how I first discovered the deliciousness of beef and barley soup. When I was growing up, roast beef dinner was almost always followed by a big pot of scotch broth, a simple soup made with beef broth, chopped leftover beef, cooked barley and diced carrots.

Personally, I prefer to save my cold roast beef for sandwiches, but sometimes I have enough left over that I can't finish it up within the next few days. When that happens, I chop it what's left of the roast into bite-sized cubes and stash it in the freezer until I'm ready to make soup.

If you're making this recipe using leftover beef, skip steps 1 and 2, and add 2 cups chopped cooked beef to the pot in step 5.

Chase the winter chill away with a steaming-hot bowl of this hearty soup, made with chunks of stew beef, mushrooms, carrots and oats in a rich beef broth. Traditional recipes for this soup can take up to 3 hours to make on the stovetop, but this version is ready in under an hour thanks to the magic of pressure cooking!