Hurray! The Secret Recipe Club is back!

If you're not familiar with the concept, here's the Coles Notes version - every month, a group of SRC members are given a secret blogger buddy, and are responsible for making and photographing and documenting one of their recipes. Then we all reveal those recipes at the same time on the same day, and have a grand ol' time checking out the great finds. 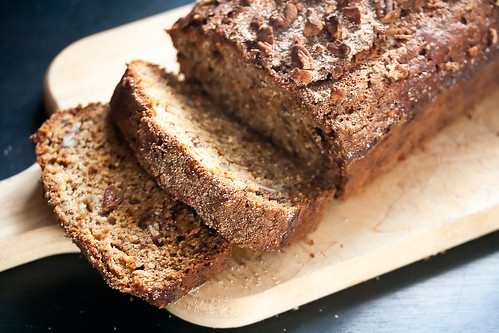 It's always exciting to see who my blogger buddy is each month, and I'm particularly excited this time around because I was assigned to Jen of Beantown Baker.

Jen has been blogging for nearly 5 years and posts as often as twice a week... as you can imagine, there is no lack of recipes to choose from!  True to her blog's name, she is indeed from Boston, and mostly blogs about baked goods and sweet treats, though she does have quite a few savoury recipes, too.

After spending a while poking around (and making myself very hungry in the process), I realised I kept returning to her Cinnamon Banana Bread.  I can never pass up a good banana bread recipe, and this one looked positively irresistible... honestly, who could look at that crackled top full of gooey cinnamon goodness and not get an instant craving? Not me, that's for sure. 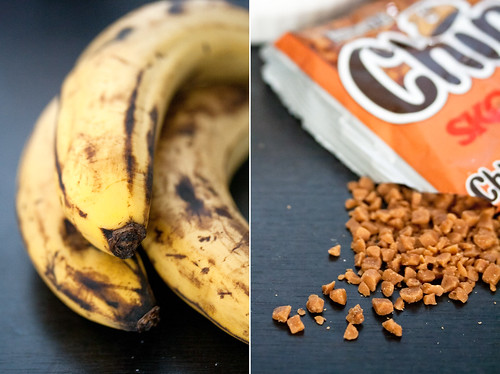 The only thing that stood between me and banana bread heaven was those darned cinnamon chips. 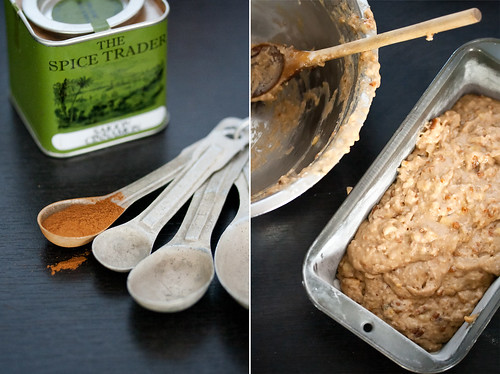 So, rather than give up and make something totally different, I decided to make the banana bread using the next best thing... toffee chips!

I did make a few other changes to Jen's recipe - I swapped out the old-fashioned oats for a smaller amount of quick-cook oats because I wanted a less oatmealy sort of texture, added a ¼ cup Greek yogurt to make it extra-moist, doubled the cinnamon to make up for the lack of cinnamon chips, and stirred in some chopped pecans for crunch. Of course, my changes mean this recipe isn't quite as healthy as Jen's version, but let's just cut slightly thinner slices and pretend that makes up for it. :) 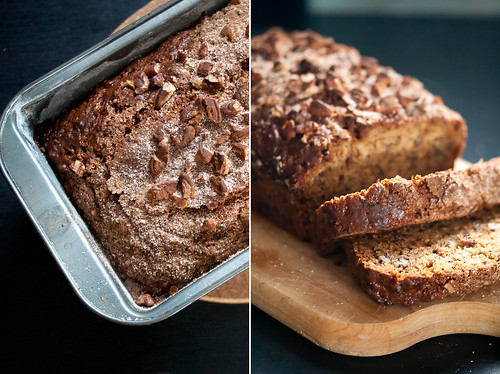 The end result is a tender, moist banana bread with a noticeable cinnamon flavour that's dotted with melted toffee and crisp pecans. It's so darned good that I feel slightly guilty about eating it for breakfast, because it tastes like it ought to be a dessert.

Then again, nothing's stopping me from having it for breakfast AND dessert. Right? 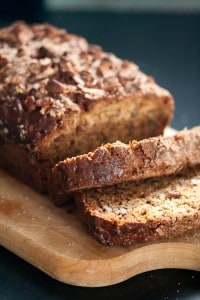