It's the official posting day for October's installment of Secret Recipe Club. Yay! 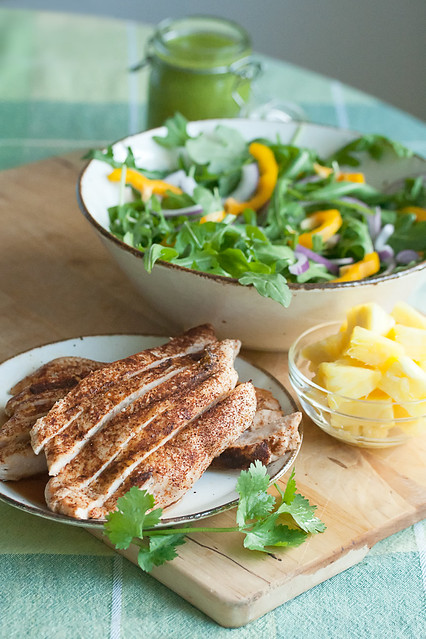 (Actually, it's just official posting day for my group... believe it or not, the project is so popular that there are now four groups and over 200 participating bloggers. Pretty impressive, especially if you consider the very first SRC reveal date was only six months ago, and had a whopping total of 19 participants!)

My secret blogger assignment for this month is Melissa from A Fit and Spicy Life.

As the name might suggest, Melissa is more than a food blogger - she blogs about fitness, wine, travel and restaurants, too.  She has an extensive collection of recipes on her blog, blending her own original creations with recipes adapted from other sources like Cooking Light, Food Network and Martha Stewart.

While poking around her recipe index, I kept wandering back to an entry for a Grilled Chicken and Spinach Salad with Spicy Pineapple Dressing, which was originally posted on the Cooking Light website. 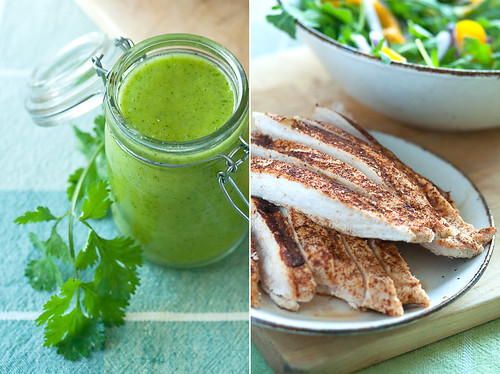 Yes, I know I just posted a grilled chicken salad recipe a few weeks ago, but trust me... aside from the fact that both salads involve slices of grilled chicken breast on a bed of salad greens, they are completely different.

(And besides, I am a firm believer that you can never have too many meal-worthy salads in your arsenal. Despite what Homer Simpson once said, you can make friends with salad.)

As always, I made a few changes to the original recipe to suit my tastes. First, I added a little honey to the dressing, because the pineapple I got wasn't as sweet as I'd have liked. I also omitted the jicama because it's impossible to find without travelling halfway across town, substituted yellow peppers instead of red because I thought they looked prettier, and used arugula instead of spinach because I thought the peppery bite would work better with the other flavours. 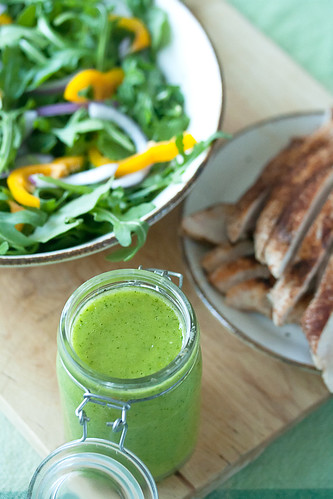 Once I'd finished taking photos, I realised my finished salad still needed a little je-ne-sais-quoi, so I ended up adding slices of cucumber and avocado to the mix. Call me Goldilocks, but after those two final tweaks, it was just right.

I'm debating maybe adding sliced radishes or daikon next time around, but we'll save that for another day. (What can I say?  I like my salads with lots of stuff in them.)

Final verdict? This is a fabulous recipe and I'm ever so glad Melissa blogged about it.

It's refreshing and light, cooks up super-fast, and is packed with a ton of flavour. I feel like this is the kind of thing you'd find on the menu of a fancy California-style eatery that specializes in healthy yet delicious dishes, except you don't have to jump on a plane to California or pay a small fortune for this beautiful bowl of greens. 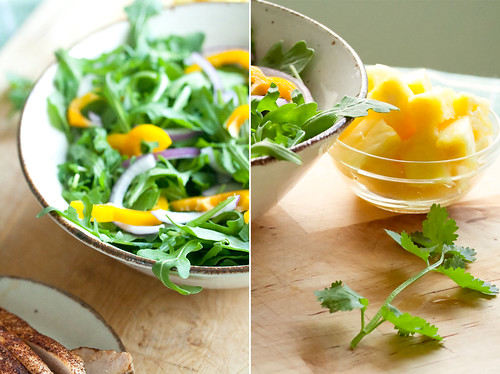 Best of all, the addition of the chicken also means this salad is substantial enough to have as a meal if you round it out with a little bread and a dessert (and really, who doesn't love a meal that leaves you with enough room for dessert?)

There's a lot to love about this colourful summertime salad, but the star of the show is definitely the sweet-and-spicy pineapple dressing. Try it drizzled onto grilled shrimp or pork for a different (yet equally delicious) variation.