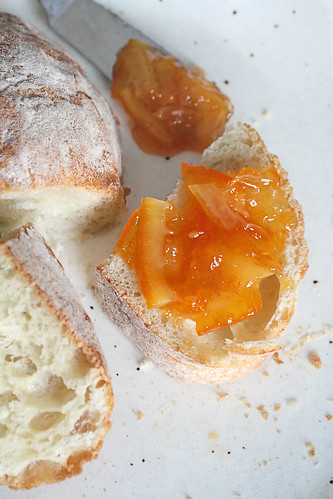 I first heard of Cara Cara oranges last year, when I happened upon a photo of a beautiful winter salad of dark greens topped with glossy coral-pink slices on a blog I follow.

Soon after, I spotted a bag of Cara Caras at the friendly neighbourhood greengrocer. Clearly, this was more than just coincidence.... it was the universe sending me a sign. It was obviously Meant To Be.

That was the beginning of a wonderful love affair, which lasted exactly one month before citrus season ended and my beloved Cara Caras disappeared. I made do with regular oranges, but it just wasn't the same.

It's the colour that makes a Cara Cara so special... a gorgeous pale pinkish hue that instantly cheers me up, no matter how grey and nasty it might be outside. It brings to mind sunrises on cold clear winter mornings, or the blush-coloured tulips that emerge from my garden as soon as the first rays of spring sunshine warm the ground. It's unabashedly girlie and delicate and optimistic, the very colour I've always imagined rose-coloured glasses would be. 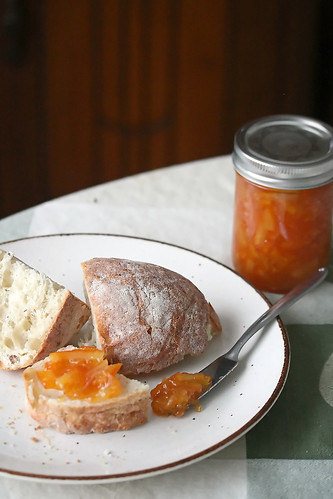 The Cara Cara isn't nearly as delicate as its colouring might suggest, though. In fact, the flavour is essentially the same as a regular navel orange... though I like to believe that they're maybe just a little bit sweeter, a little bit juicier and a little bit more refreshing than their orange-coloured counterparts.

This year, I was determined not to let Cara Cara season slip by without finding a way to carry me through those long lonely months. And what better way to do that than a simple chunky marmalade?

Unfortunately, that gorgeous pinkish hue I love so much doesn't come through in this marmalade - it comes out a rather ordinary bright orange colour (which I still love, but in a totally different way from pale coral blush). To compensate, I added a splash of whiskey to the pot right at the end, giving it an unexpected boozy kick. (Shhh... don't tell The Boy I dipped into his precious Bowmore)

The result is a chunky marmalade with a classic bittersweet flavour and just a hint of smoky whisky. Just like the fruit it's made from, this jam may look all sweet and sunny on the surface, but there's a wonderful surprise waiting inside. Trust me, your English muffin won't know what hit it.

Using a very sharp knife, cut the oranges and lemon into halves lengthwise. Cut off the top and bottom ends of each half, then cut out seeds and white pith in the centre. Collect the end bits, seeds and pith in a small bowl - you'll need these later.
Slice the orange and lemon halves cross-wise into very thin slices, then chop up into smaller bits (how small is up to you - I like my marmalade quite chunky, so I didn't chop much at all, but you can mince the peel very fine if you prefer a less chunky marmalade). Transfer the chopped fruit and any accumulated juice to a large non-reactive mixing bowl.
Wrap up the seeds, pith and end bits you saved earlier in two layers of cheesecloth and tie off with cotton twine to make a neat parcel. Place this bundle in the bowl of chopped citrus, then pour in the water. Cover bowl tightly with plastic wrap and refrigerate for 24 hours.
The next day, pour the contents of the bowl into a large non-reactive saucepan. Stir in the sugar, and bring to a boil over medium-high heat. Reduce the heat to low and simmer, uncovered, for about 2 hours or until the peels are quite soft. Remove the cheesecloth bundle from the pot, and discard.
Turn the heat up to medium, bringing the marmalade to a rolling boil. Cook for 30 minutes, stirring frequently, until the jam reaches 220F on a candy thermometer (or until it passes a set test).
Stir in the whiskey, and cook for 5 minutes longer. Immediately ladle the jar into sterilized glass jars.
Once cooled, the jars can be stored in the refrigerator for up to a month. If longer storage is desired, process the jars immediately in a boiling water bath for 10 minutes, after which they can be stored for up to a year in a cool, dry place.