Home » main course » vegetarian » Rice, Rice Baby: Mushroom and Pea Risotto (and a Review of the Breville Risotto Plus)

It's no secret that I'm a sucker for homemade risotto, but sometimes I just don't have the time to stand in front of the stove to stir a pot full of rice and broth for twenty minutes.  I don't mind it that much, since there's something calm and meditative and relaxing about the task, but I could probably use the time on other things, like washing lettuce, making dressing, slicing bread or sipping a glass of wine.

So, when the folks at Breville asked me if I'd like to try out their new Risotto Plus countertop risotto maker, I was intrigued enough to accept. 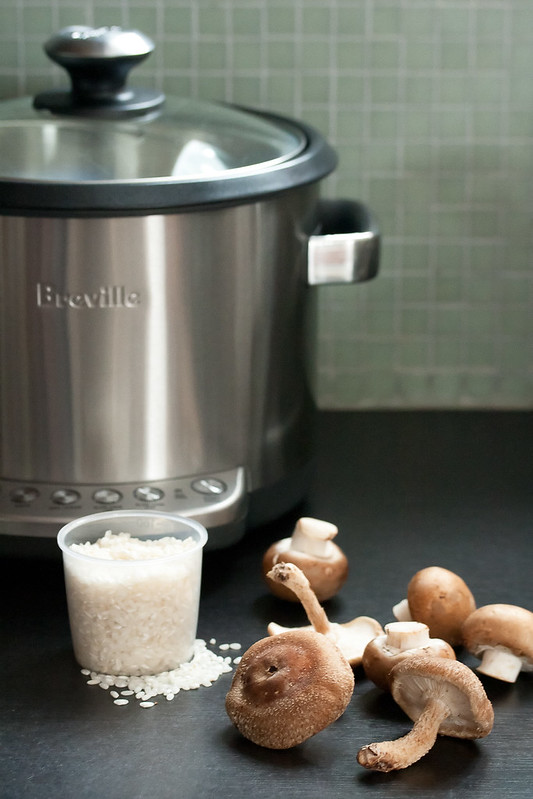 Admittedly, I was a little skeptical that it would be able to make a properly creamy risotto, since every recipe I've ever read insists that the key to getting the right consistency is in that constant stirring motion.  Still, since I'm usually motivated by equal parts laziness and curiosity, I decided to give it a whirl.

For its maiden voyage, I prepared the mushroom risotto recipe that I received as part of my review kit, adding peas and fresh dill to give it my own spin.

I started off the same way I would have for a regular stovetop recipe, using the Sauté function to cook down the shallots and mushrooms, followed by the rice and a splash of wine.  Then, once the rice had absorbed most of the liquid, I poured in the broth, pressed the Risotto button, and sat back to let the Risotto Plus work its magic. 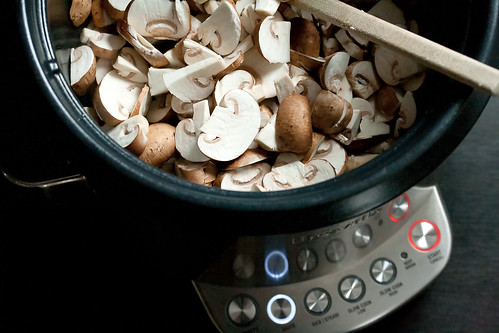 The recipe mentioned that I could choose to stir partway through but that it wasn't really necessary, so I decided to take the ultra-lazy route and didn't even touch the spoon until a beep alerted me that the risotto was done... and guess what?  When I lifted the lid, I was greeted by a soft, creamy risotto that looked just as if I'd stood over the pot and stirred the whole time.  A quick stir to finish the risotto with a pat of butter, a sprinkling of Parmesan and some thawed peas was all I needed to do, and our meal was done.

Cleanup was a breeze, too.  The non-stick cooking bowl is lightweight and easy to lift out, and a quick swipe with a soapy sponge was all it took to remove all traces of gooey risotto. 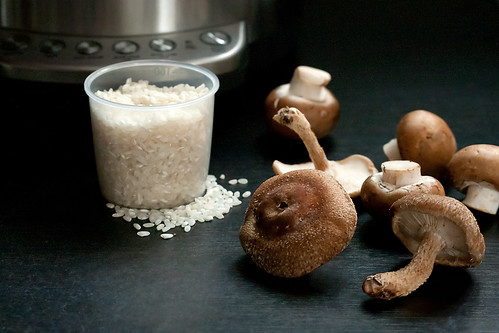 Granted, even a hardcore risotto lover like me isn't so head over heels that they'd devote precious cupboard space to an appliance entirely devoted to risotto.

Thankfully, the Risotto Plus also doubles as a regular rice cooker, slow cooker, and steamer!  So far, I've tested both the steamer and rice cooker functions, and I'm happy to report it performs beautifully on both counts - the rice, in particular, comes out perfectly soft and fluffy, which is something I can never seem to achieve on the stovetop.  I haven't had a chance to try the slow cook function, but I have every intention of making a pot roast in this puppy before the winter's done.

It's also surprisingly capacious. The non-stick removable cooking bowl holds up to 4 quarts of liquid (or roughly 3.8 litres, for the metrically inclined), and can prepare up to 20 cups of cooked rice.  The removable steamer basket is equally roomy, with enough space to cook two servings of fish or an entire bundle of asparagus in one go. 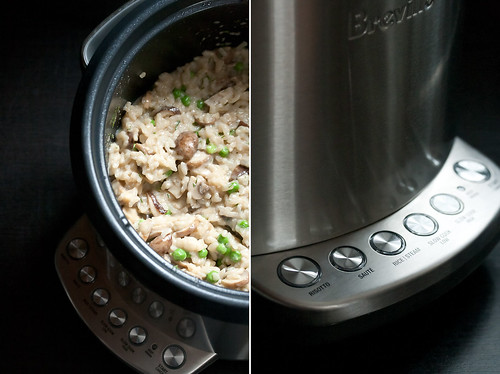 There are a couple of minor quibbles that keep the Risotto Plus from achieving absolute perfection, though neither one really counts as a deal-breaker.  First is the lack of built-in timer, though I know that whining about having to use a standalone timer falls squarely in the realm of First World Problems. (Note that this isn't an issue when making rice or risotto, since the Risotto Plus automatically flips to Keep Warm mode as soon as the rice is cooked, and then shuts off automatically after a preset period of time.)

The other issue is the special measuring cup, which is a plain clear plastic cup that is apparently essentially for measuring out the proper ratios of rice to liquid according to the manual, but has no markings that make it obvious that this is its sole purpose in life.  Thankfully, the manual provides the all-important equivalencies in case the cup gets misplaced, so it's not the end of the world if it does go missing - but still, it looks so much like the little plastic cup we use for laundry detergent that I worry about leaving it on the counter, lest someone helpfully "return" it to the laundry room (or, more likely yet, drop it into the Gadget Drawer of Oblivion, never to be seen again). 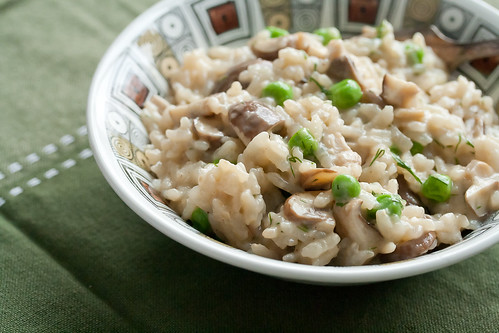 Overall, though, I'm quite impressed with the Risotto Plus.  In fact, I'm so pleased that I've already given the rice cooker and countertop steamer the boot, and have put the slow cooker on notice that it'll probably be next to go.

It's not to say that I won't occasionally go back to making risotto the old-fashioned way, particularly if I'm in need of something calm and meditative to do... but it's nice to know I have the option to kick back with a glass of wine instead when I'm thusly inclined.

Disclosure: I received compensation, including a Breville Risotto Plus rice cooker and ingredients for a mushroom risotto, in exchange for a review of the product.  All opinions are (as always) entirely my own.

5.0 from 3 reviews
Mushroom and Pea Risotto