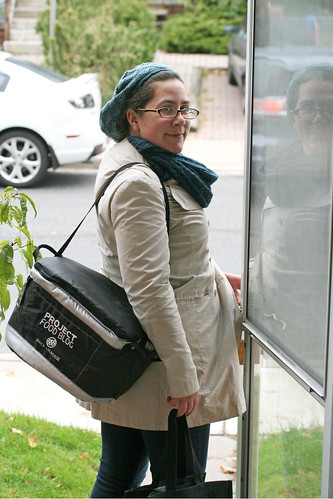 Yup, you read that right. I made it to Challenge #6! To say I'm really stoked to be among the 60 bloggers who moved ahead to this challenge is a major understatement, since I hadn't really expected to make it this far when I first joined Project Food Blog. No matter what else happens after this, I can say that I've had a blast participating in this competition and I'm proud to have come this far.

So thanks to all of you - the voters, the commenters, and most of all, the competitors. You're awesome, each and every one of you.

For Challenge #6, our task was to create a meal consisting of a main course, side dish, dessert and drink. Then, we had to pack up the whole kit and caboodle into our specially-designed Project Food Blog cooler bag and take it out on the road.

I wish I could have packed up my cooler bag and shared a meal with each of you to say thanks, but that would require a lot more money than I have (and also a teleporter and time machine, which I most definitely don't have)... so I decided to share my meal with one of the awesomest people I know: my grandmother.

My grandmother taught me almost everything I know about cooking, and I owe a lot of my success in the kitchen to her. She's been an inspiration to me in the food I make, in my the knitting and crochet projects I've tackled, and even in my puny attempts at growing my own fruits and vegetables. These things always seemed to come so effortlessly to her, despite her lack of any formal education or training. 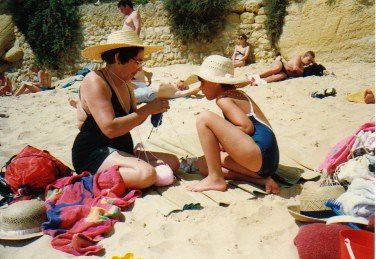 Despite all that, I haven't been able to share this competition with her so far, because... well... how do you explain the idea of a food blog to an 88-year-old woman who's never used a computer in her life, especially when her English and your Portuguese are both a little shaky? Trust me, it gets very confusing very fast. :)

Thankfully, a good home-cooked meal speaks a universal language, which is why this challenge was the perfect opportunity to share the competition with her. So, after loading up my hamper with a whole bunch of goodies and filling up another bag with a variety of plates, bowls, cutlery and placemats, off I went to grandmother's house. (And no, I didn't wear a red cape... though it was tempting) 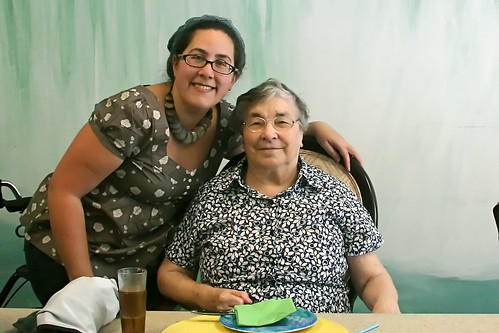 For the past few years, my grandmother has been living in a nursing home where the food is decent but otherwise uninteresting, so I like to plan my visits around mealtime so that I can drop in with a nice meal. More often than not, I'll just pick up a slice of pepperoni pizza from the pizzeria around the corner (my grandmother has very few indulgences in her life, but pepperoni pizza is her favourite), but I do try to bring some home cooking every once in a while.

Believe me, whatever Little Red Riding Hood might have been carrying in that basket of hers before she ran into a wolf, I can tell you it couldn't possibly be as good as what was snuggled up in my Project Food Blog Cooler.

My plan was this: With the weather getting colder and the days getting shorter, I wanted a meal built around warmth and sunshine... and the more I mulled over what I wanted to make, the more my thoughts kept drifting back to a feijoada-inspired black bean soup I'd been thinking of recreating for some time now. So, using that as my starting point, I created a menu of Brazilian-Fusion inspired dishes designed to stir up images of sunny beaches and warm rain forests with every bite.

I kicked off the party with that Brazilian Black Bean Soup that had been dancing around in my head. Drawing on the flavours of the classic slow-cooked meat-and-bean stew called feijoada as my inspiration, I took a simple black bean soup and spiced it up with smoky chourico sausage, bay leaf and a hint of orange juice. To go along, a batch of freshly baked pao de queijo, the little cheese buns with crispy outsides and fluffy insides that are ubiquitous in Brazil. 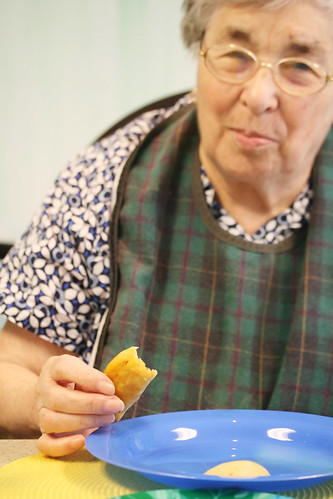 Next up, the main event: bite-sized Brazilian Beef Pasteis, stuffed with a sweet and savoury filling made with slow-cooked shredded beef, green olives and raisins in a spicy bay-leaf-infused tomato sauce that falls somewhere between the traditional Brazilian beef filling, a Cuban shredded beef dish called ropa vieja, and the picadillos of South America. Like the empanadas found elsewhere in South America, these little deep fried pies are a popular snack in Brazil, where they're made with all sorts of fillings ranging from shredded meat to guava paste with cheese. Traditionally, they're deep-fried until golden and crispy, but I opted to bake mine for a slightly healthier version.

These little pies have a special place in my heart because my grandmother would often make a Portuguese version of these pastries, also called pasteis, usually filled with shredded leftover meat or sausage mixed with a thick bechamel sauce. As you can imagine, these were a really big hit, since the closest the nursing home menu comes to a dumpling is boiled perogies. 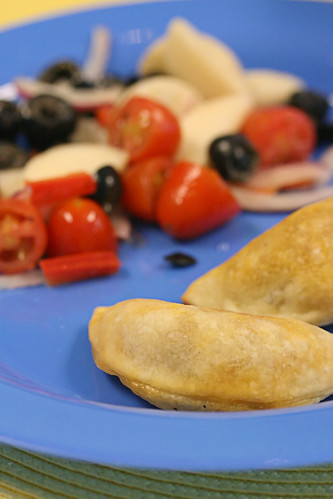 Alongside my little meat pies, I served a Heart of Palm Salad inspired by one I remember enjoying at a Brazilian steakhouse. A simple blend of canned hearts of palm, canned black olives, red pepper, red onion and cherry tomatoes in a light vinagrette, this salad makes a wonderful side for an on-the-go meal because the vegetables are lightly marinated by the time you arrive at your destination, and there aren't any delicate greens that might wilt in transit. With the addition of sliced hard-boiled egg, it's also a great meal in and of itself for work lunches and such.

To finish off the meal in style, I mixed two classic old-school desserts, pineapple upside-down cake and banana bread, to make sweet gooey single-serve Banana-Pineapple Upside Down Cakelets. While the recipe itself isn't something you'd ever find in Brazil, but the flavours of banana, pineapple and doce de leite (a.k.a. dulce de leche) most definitely are.

Of course, the obvious choice of drink for this meal is a glass of Brazil's most famous cocktail, the caipirinha. However, my grandmother has never been much of a drinker and has pretty much stopped drinking altogether nowadays... so a boozy drink based on the Brazilian equivalent of moonshine certainly wasn't an option. So instead, I prepared a jar of non-alcoholic Mango Iced Green Tea, a nod to the copious quantities of mango juice I drank in Brazil when I visited as a teenager. Besides, once I served it up in sunny yellow cups with a little paper umbrella and a bendy straw with bright blue stripes, you'd never have guessed it wasn't a boozy tropical cocktail from a resort in Rio.

The final verdict? Despite the glaring lack of pepperoni pizza, the meal earned rave reviews from my grandmother. Move on over, Little Red Riding Hood... there's a new star in town. :) 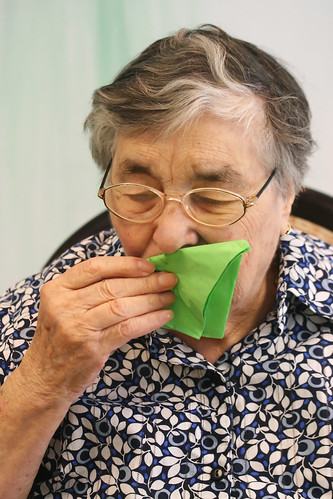 (NOTE: Since this is already quite a lengthy entry, I won't be sharing all my recipes with you in this post. For now, we'll start with the star of the show, the Shredded Beef Pasteis. The rest of the recipes will be posted separately over the next few days, so stay tuned!) 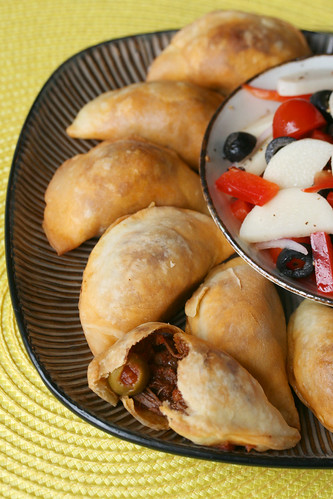 Start by preparing the pastry. In a large mixing bowl, combine flour and salt. Add olive oil, cachaca and vinegar, and rub with your fingers until you have a loose and crumbly mixture. Add water, one tablespoon at a time, stopping as soon as the mixture starts to come together. Turn out onto a clean work surface, and knead until the dough feels soft and smooth, adding flour as needed if the dough starts to feel too sticky.
Shape the dough into a disc, then wrap tightly with plastic wrap and refrigerate for at least an hour before using.
When ready to bake, preheat oven to 400F and line a baking sheet with parchment paper.
On a clean work surface lightly dusted with flour, roll out the dough into a very thin sheet, about ⅛" thick. Using a 3" circle cutter, cut out as many dough circles as possible. Gather up the scraps and repeat until as much of the dough as possible has been cut into circles.
To assemble the pasteis, and place a tablespoon of filling on each dough circle. Brush the edges of the dough with a little beaten egg, then fold over to make a semi-circular dumpling, pinching the edges or crimping with a fork to seal them shut.
Arrange the finished pasteis on the prepared baking sheet. Bake in preheated oven for 20 minutes, then turn over and continue baking for 5 minutes or until golden brown all over. Serve warm, or at room temperature.

Pat the roast dry with paper towels, and season liberally with salt and pepper.
In a large heavy-bottomed Dutch oven set over medium-high heat, sear the roast in olive oil until browned on all sides. Add remaining ingredients, and bring the mixture to a simmer. Meanwhile, preheat the oven to 275F.
Once the mixture is simmering, cover the Dutch oven and transfer to the preheated oven to continue cooking for about 2-3 hours, or until the roast is tender and falling apart, turning the roast periodically. (This step can also be completed in a slow cooker set on low for 8 hours)
Once the roast is very tender, transfer to a large mixing bowl, leaving the sauce in the pot. Place the Dutch oven on the stovetop, and bring to a boil over medium heat. Cook the sauce until reduced by about half.
While the sauce is reducing, use two forks to break down the roast into shreds. Return the shredded beef to the Dutch oven once sauce is reduced, and stir until evenly mixed.
Allow the mixture to cool completely before using to fill the pasteis. Leftovers make a wonderful meal... simply reheat and serve on a bed of plain white rice. 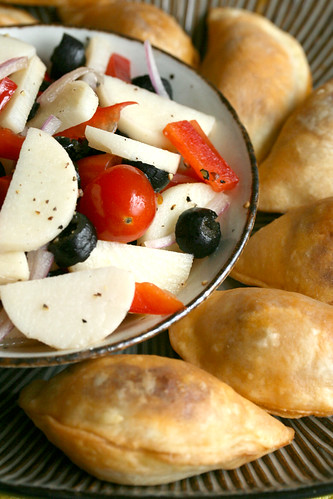 In a pretty salad bowl, toss together the hearts of palm, olives, cherry tomatoes, red pepper and onion.
Add the dressing ingredients to the bowl, and toss until salad is evenly coated. Let stand for at least one hour before serving.