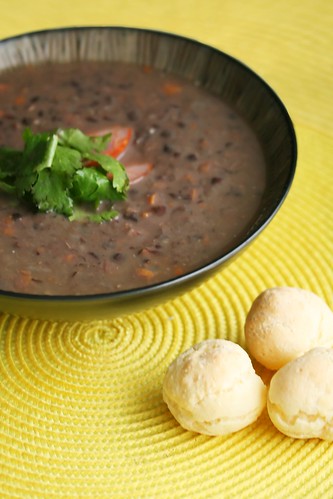 Every fall, right about the time the leaves start to turn yellow and brown and red, my mind will inevitably drift towards thoughts of soup. Hot, steamy, comforting bowls of soup that fight off those chilly, rainy autumn nights, drunk straight from thick ceramic bowls held between both hands, so that my cold fingers can absorb some precious warmth.

This soup first popped into my head a few weeks ago, when a brief conversation about a classic Brazilian dish called feijoada slowly coalesced into an idea... a quick and simple black bean soup that would deliver all the delicious flavours of a feijoada, but that requires just a fraction of the time and effort involved in making the original.

A traditional feijoada is an all-day sort of dish which comes from the same family as French cassoulets and American baked beans. While there are as many versions as there are cooks in Brazil, the basic elements of the dish are always the same - black turtle beans and an assortment of fresh and cured meats, like beef, chicken, pork, bacon, and sausages such as chourico or linguica. 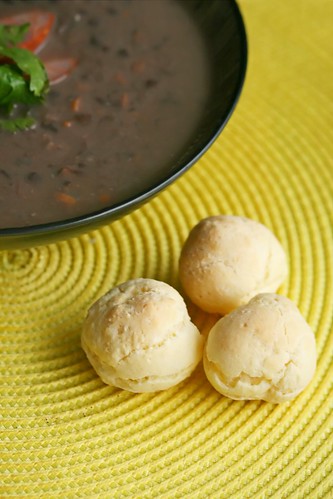 Because it's such a time-intensive process to make feijoada at home, most cooks save it for special occasions when they can spare the time to watch over the stew and prepare the array of traditonal side dishes like white rice, cooked collard greens, sliced oranges and a dish of seasoned toasted manioc flour called farofa.

This soup condenses all that flavour and time and effort into a quick-and-dirty version. Canned black beans cut out the soaking and cooking required for dried beans, while the assortment of meats has been cut down to just one - but I made it count by using a spicy Portuguese chourico that gives the soup plenty of meaty, smoky flavour. With the addition of a little onion, carrots, garlic and bay leaf, you've got a seriously satisfying and flavourful bowl of soup.

The crowning touch in this soup is the orange. The habit of serving sliced oranges with feijoada may seem unusual if you've never tried it, but the juicy tang of the citrus provides a refreshing contrast to the smoky richness of the dish. By adding the juice and zest of an orange to this soup, you'll get a hint of citrus that provides that same kind of balance. It's what really sets this recipe apart from a run-of-the-mill bean soup. 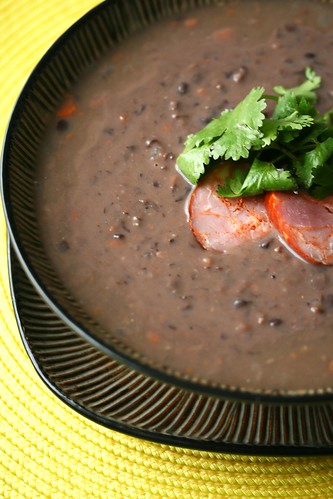 Because I created this soup as part of a special meal for my grandmother, I wanted to go the extra mile... so I also whipped up a batch of pao de queijo, the addictive bite-sized cheese buns that are one of Brazil's most popular snacks.

Chewy and crisp on the outside and fluffy on the inside, these little puffs are so good you can't eat just one, so it's a good thing this recipe makes around fifty of the little suckers. Besides, they don't keep well past the first day, so there's no point in curbing your gluttony... or so I've told myself many a time, anyways.

The key ingredient that makes these buns so fluffy and delicious is tapioca starch (aka manioc starch) or polvilho, as it's called in Brazil. I purchased mine at a Latin American grocer that carries several Brazilian products, but I've been told that it is also available in many Asian markets. Whatever you do, DO NOT substitute regular wheat flour in this recipe, as the results will be disastrous.

--
These recipes were originally created as part of my Challenge #6 entry for Project Food Blog. If you haven't checked it out yet, you can find it here (...and while you're at it, you can throw me a vote if you're thusly inclined. Voting closes on September 28th).

In a large saucepan set over medium-high heat, saute the chourico in olive oil until it begins to brown. Add onion, carrot and garlic, and continue cooking until the onion begins to colour and soften.
Stir in chicken broth, black beans and bay leaf. Bring the mixture to a simmer, then reduce heat to low and cook, uncovered, for 30 minutes. Partway through the cooking time, use a wooden spoon to gently mash the beans against the side of the pot.
After half an hour, stir in the orange zest and juice. For a smoother soup, you can puree half the mixture using a blender or food processor at this stage, or serve just as it is for a chunkier version.
Serve the soup piping hot with a garnish of chopped cilantro.

Preheat oven to 350F, and line a baking sheet with parchment paper.
In a medium saucepan set over medium-high heat, combine the water, milk, oil and salt, and bring to a boil.
Remove the pan from the heat. Add the tapioca starch, and stir until the mixture is smooth. Set aside to cool.
Once the mixture cools to lukewarm, add the eggs and cheese, and stir with a wooden spoon until mixture is evenly combined. Using hands, knead the mixture in the pan for about 3 minutes, or until it forms into a smooth, elastic dough that is slightly sticky.
Roll the dough out into tablespoon-sized balls (if the dough is very sticky, you may find it easier to do this step with lightly oiled hands). Arrange the balls on the prepared baking sheet, spacing them an inch apart.
Bake in preheated oven for 20-30 minutes, or until balls are puffed and golden brown. Serve immediately.
(Note: Unbaked balls can be frozen to bake at a later date. When ready to serve, pop the frozen balls right into the oven and bake as per directions, adding about 10-15 minutes to the baking time.)