In our house, we don't usually make a big deal out of Easter. Mostly, it's just an opportunity to spend a Friday morning sleeping in and an excuse to eat too much chocolate. 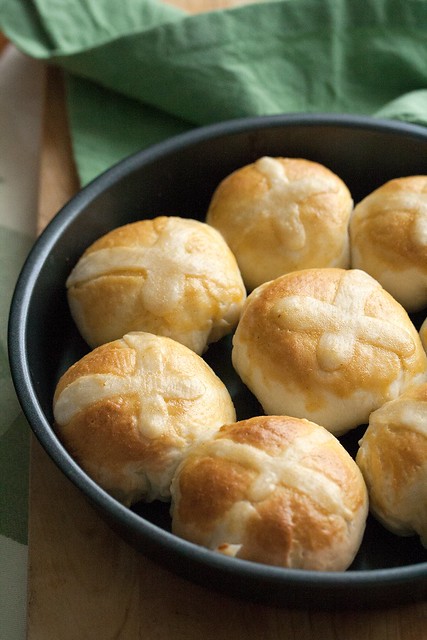 There are a few holiday traditions I absolutely refuse to live without, though, the most important of which is my annual hot cross bun binge-fest. As far as I’m concerned, it’s not Easter until I’ve gobbled up at least a half-dozen of those fruit-studded sweetly spiced buns.

This year, I decided to give my annual tradition a decidedly untraditional twist to wrap up my two-post series featuring French’s Dijon mustard.

At first glance, they could pass for a typical hot cross bun thanks to their glossy golden-brown crust, but there’s a delicious secret tucked beneath those trademark crosses - a savoury little pocket of bacon-and-green-onion deliciousness neatly tucked in the middle of each bun. 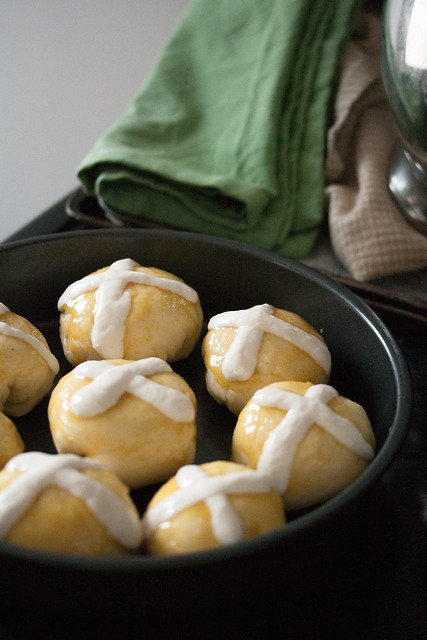 The inspiration comes from my local Chinese bakery, which makes a delicious bacon and green onion bun that would easily make my Top 10 desert island foods list. (Right after that same bakery’s banh mei subs, which are equal parts deliciously porky and ludicrously cheap, but I digress.)

Much like my beloved Chinese bakery buns, this recipe begins with a fluffy Asian-style milk dough enriched with cream, butter and egg, and wraps it around a simple filling of crisp-fried bacon, thinly sliced green onion and a generous amount of black pepper. 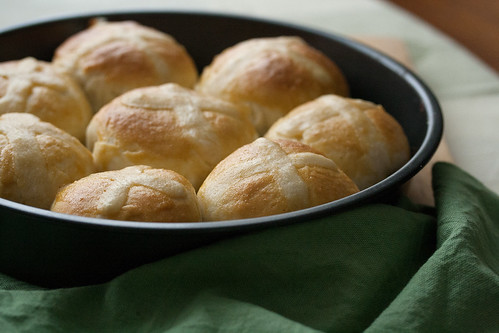 From there, we take a detour into hot-cross bun land by topping off the buns with a flour-and-water paste cross, before coming back to the savoury with a double-dose of French’s Dijon mustard - a little dab added to the filling for a peppery bite, and a more generous dollop blended with honey for a sweet-tangy glaze that gives the buns their glossy sheen and golden-brown colour. 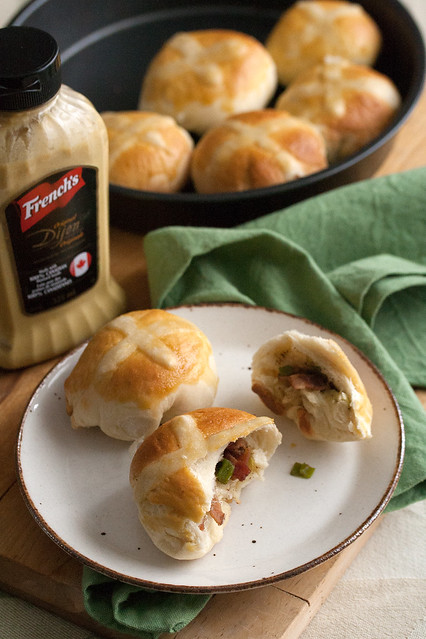 I’m not going to lie, these do take a little effort to prepare, but they’re utterly worth it… especially if you’re after a little something special to add to your holiday table. You can make these the centerpiece of a cozy family brunch, or serve them instead of rolls for a full-on Easter dinner with all the trimmings. Either way, they’re sure to be a hit.

Disclosure: This post was brought to you by the makers of French’s Dijon Mustard. I received compensation to write this post through the French’s Easter Program… all opinions expressed are my own.

This savoury twist on an Easter classic has a wonderful secret hiding inside its rich, fluffy milk dough... a pocket of bacon and green onion deliciousness!

Glaze and Bake the Buns:

You can also prepare these buns a day ahead. Simply prepare the recipe as per the directions, but once the buns are filled and shaped, cover them tightly with plastic wrap and transfer to the refrigerator to rise overnight. The following day, leave them on the counter to come up to room temperature while the oven preheats, then continue as usual from there. Voila!