I've talked before about some of the vegetables that I love and regret not discovering until much later in life. If I was compiling a list, the humble celery root would probably land somewhere near the top. 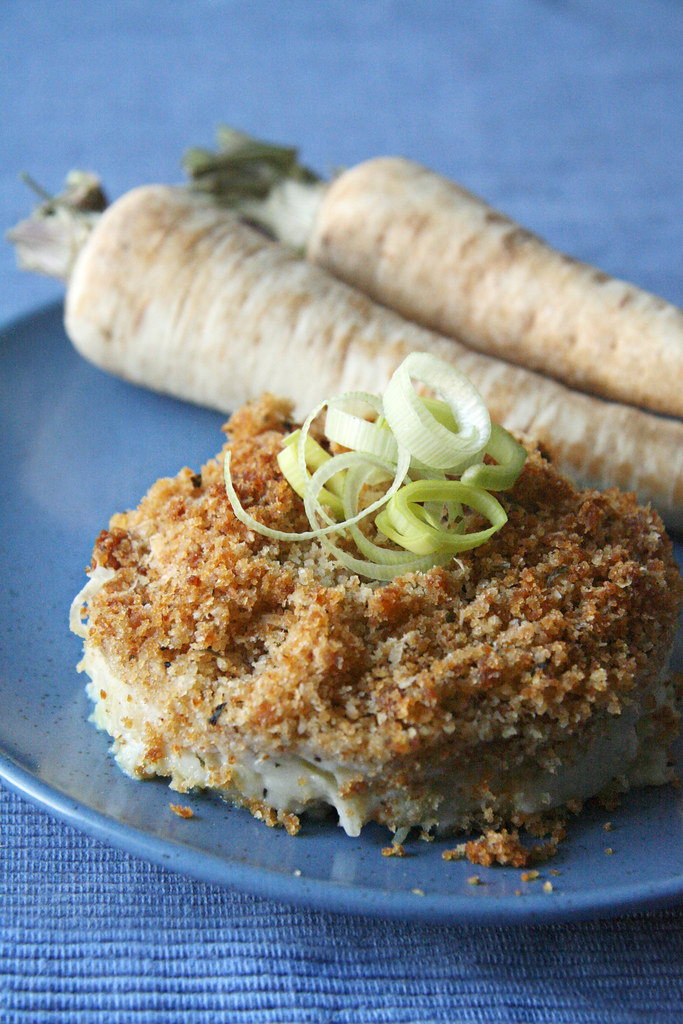 Given that I really had no idea what a celery root would taste like or how it should be cooked for the first 20-something years of my life, I really can't explain what possessed me to purchase my very first celeriac. I guess I have a soft spot for ugly ducklings, and in the world of vegetables, they don't come much uglier than the gnarled brown softball that is the celery root.

That said, if you take the time to get to know the vegetable hiding under that strange-looking exterior, you might be pleasantly surprised. The flavour is similar to celery (obviously), only fresher and a little subtler.

It's surprisingly versatile, too. For a refreshing crunchy salad, you can't beat thinly sliced celery root tossed with a mustardy vinaigrette and a little chopped parsley. Once cooked, celery root takes on a slightly nuttier and starchier flavour, and can be served almost any way you'd serve potatoes - mashed with a little milk and butter, pureed in a creamy soup, or baked up in a gratin.

This particular gratin uses another root vegetable I'm just getting to know - parsley root. You might mistake them for parsnips or anemic carrots, but a quick sniff of the stems will confirm their identity with an unmistakeable parsley aroma. The flavour is similar to celery root, which makes these a perfect pair for this almost (but not quite) winter gratin.

Preheat oven to 400F, and bring a large pot of salted water to a boil.
In a large pot of boiling salted water, cook the parsley and celery roots for 5-7 minutes, or until tender. Drain and set aside. Wipe the pot clean and return to the stove.
Heat the butter and oil in the pot over medium-high heat. When butter is foamy, add leeks and cook for about 5-7 minutes, stirring frequently, until soft. Stir in the flour and continue cooking, stirring constantly, for 1-2 minutes. Whisk in the chicken broth and milk. Bring to a simmer, then reduce the temperature to medium-low and continue cooking, stirring constantly, until sauce is thickened.
Remove from heat and stir in the grated Jarlsberg, stirring until cheese is melted and smooth. Taste and adjust seasoning with salt and pepper as desired.
Add the parsley and celery roots to the sauce and gently toss until evenly coated. Pour into a lightly buttered gratin or casserole dish.
In a small bowl, stir together the topping ingredients with a fork until evenly mixed and crumbly. Sprinkle topping onto the celery root mixture.
Bake gratin in preheated oven for 35-40 minutes, or until topping is golden brown and sauce is bubbly.