Guess what?  It's time for another round of Secret Recipe Club!

My assigned SRC buddy for this month is Lisa at Cook Lisa Cook.  Lisa's blog is a relatively new one for me, though I've visited a few times during past SRC reveals, so I was really excited for the opportunity to spend a little time exploring her blog and picking a good recipe. 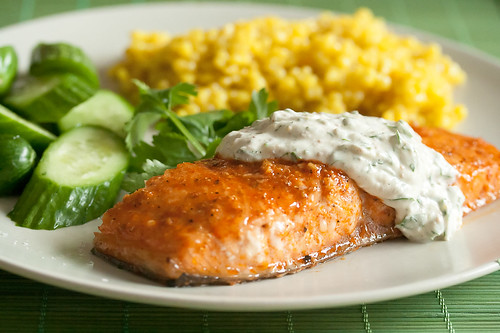 As always, I had a hard time choosing what to make.  Lisa's been blogging for since 2005 (which is even longer than me!) and covers a wide range of cuisines and courses, so there's quite the selection of dishes to choose from.

I was seriously tempted by her recipes for Upside-Down Mango Cake and Five-Spice Chicken Wings, both of which sounded absolutely delicious, and briefly considered taking on the challenge of making her Grilled BBQ Octopus before filing it away for another day. 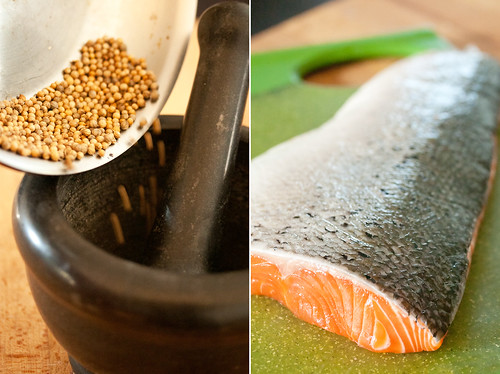 In the end, I decided to try out her recipe for Coriander Roasted Salmon with Cilantro-Yogurt Sauce, because the flavours reminded me of one of my favourite dishes at Djerba La Douce, a local Tunisian hole in the wall... err... restaurant. (Which, much to my dismay, has since changed hands... the menu remains the same, but under a new chef/owner.) 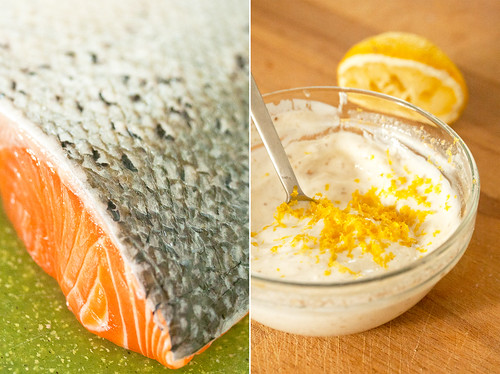 Djerba's version of the dish was a simple pan-seared trout rubbed with a coriander spice blend and blanketed with a rich beurre blanc sauce flavoured with lemon and cilantro, while Lisa's recipe replaces the delicate trout with meatier salmon filets and tops it off with a bright tangy yogurt-tahini sauce.

One is rich and buttery, and the other is fresh and light, but once you get past those initial differences, there's still a common element that unites both dishes - namely that irresistible dichotomy of grassy coriander seed and green cilantro leaves. 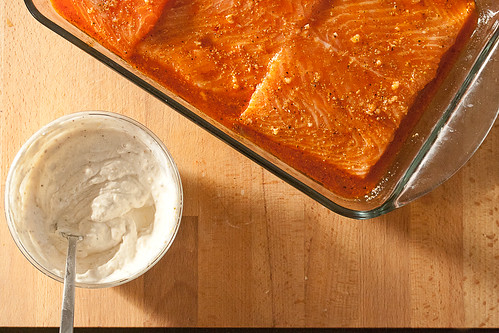 As usual, I did make a few changes along the way.  The biggest change was in the cooking method - it was simply too hot and muggy to turn on the oven when I made the dish last weekend, so I decided to cook my salmon on a cedar plank in the barbecue instead.

Planking is a fantastic technique for preparing fish on the grill... the cedar imbues the salmon with a subtle woodsy flavour as it cooks and protects the fish from the heat of the grill, leaving the filets beautifully flaky, moist and ever-so-faintly smoky. Plus you can basically serve up the fish right from the plank, which makes for a really impressive presentation if you've got company. 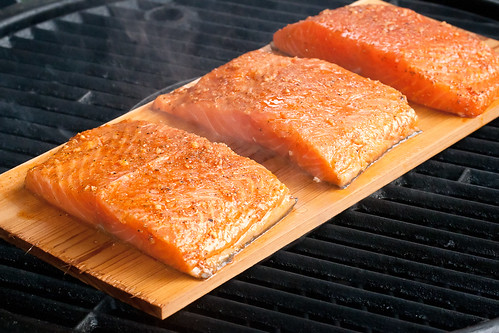 The salmon came out of the barbecue beautifully moist with a sweet and smoky flavour from the marinade that was enhanced by the planking, which paired perfectly with the cool, tangy yogurt sauce that we spooned overtop.

It's almost nothing at all like the dish that prompted me to try this recipe in the first place, but it's absolutely delicious nonetheless. 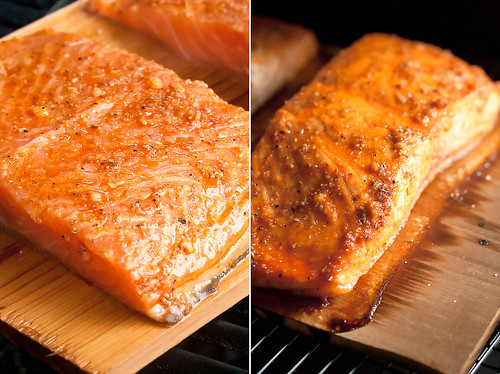 We ended up serving it up with a bright yellow tumeric-scented Israeli couscous and slices of fresh cucumber, which made for a perfect summertime supper on a stiflingly hot day.  Considering we're trying to eat more fish these days, I'd say this one is definitely a keeper.  Thanks, Lisa!