All good things must come to an end, and that includes Christmas Week.  But there's still one more recipe to share before we go, on the theme of Christmas Pies and Pastries. 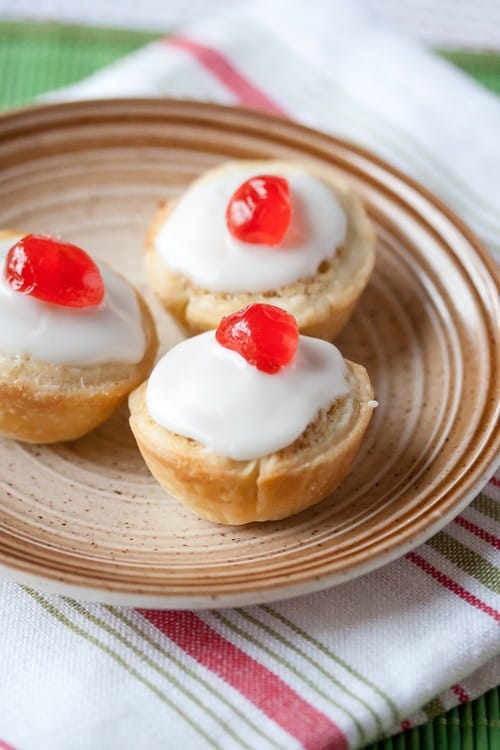 I had a few options, but in the end I couldn't pass up the excuse to crack open a jar of homemade jam to make these adorable mini bakewell tarts. They have all the deliciousness of the original, but in a two-bite format that's perfect for holiday cookie trays.

Bakewell tarts are a quintessential British dessert that consists of a shortcrust pastry shell filled with layers of jam and sweet almond frangipane, and finished with flaked almonds. Traditionally they're baked up as a full-sized tart, but I think they're much cuter when they're scaled them down into a two-bite format using a mini muffin tin.

While you might expect that they come by their name because they're so delicious when they're baked well, they're actually named for the town of Bakewell, where they were first concocted. (Incidentally, Bakewell is also known for their eponymous pudding, which also combines jam and almonds in a pastry base.)

The recipe I'm sharing with you today is a variation that's more properly known as a cherry Bakewell tart, which is basically the same tart only finished with a thin layer of white almond-scented glaze and topped with a single glace cherry.

Bakewell tarts aren't a traditional holiday treat, but I think a case could be made for starting a new tradition. I feel like there's something awfully festive about a plateful of teensy tarts draped in snowy white icing and capped with a sliver of bright red glace cherry, after all. 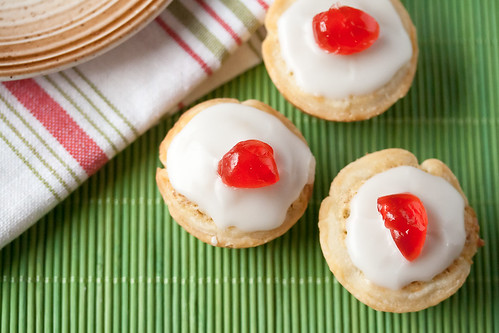 Choosing the Right Jam for Your mini Bakewell Tarts

The traditional choice for a proper Bakewell tart is raspberry jam, which is what I used for this particular batch.

That said, you can easily swap out for whatever jam you like best.

Red fruits like red currant, sour cherry or strawberry are your best bet because they have a natural acidity that balances out the sweetness of the frangipane, plus they're an appropriately festive colour for the season,

If you really want to buck tradition, though, I could see these being quite lovely with blueberry or even rhubarb. Nothing is off-limits - these mini tarts are a great way to use up whatever half-finished jars of jam are kicking around in the fridge. 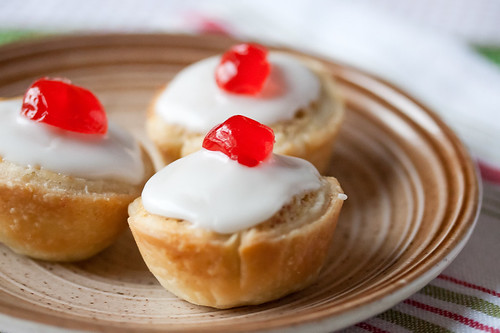 Preparing Mini Bakewell Tarts in Advance (Yes, You Can Freeze Them!)

I'm not going to lie. These tarts are basically the opposite of a quick and easy dessert. The pastry crust and the filling can both be assembled pretty quickly, but the crust needs to hang out in the fridge for at least an hour to firm up, while the frangipane needs to chill for at least a half-hour.

But the good news is that you can (and should!) split up the prep over several days. The tart dough and the frangipane filling can be made up to 2-3 days ahead of time, which means you just need to assemble the tarts and whip up the frosting while they bake.

Even better, they also freeze beautifully, which means you can bake up a batch or two well in advance and then freeze them unfrosted in an airtight container. All you need to do is thaw them out overnight before finishing them off with icing and cherries. 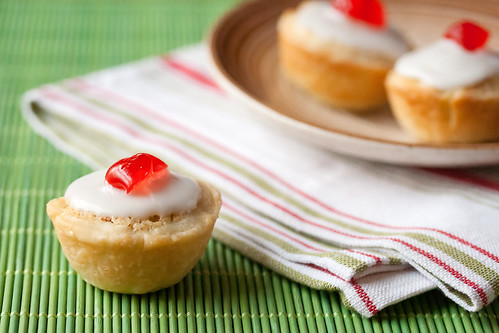 Regardless of how you prepare ahead, make sure to brew up a big pot of proper tea and brace yourself for the inevitable onslaught of compliments. Because if there's one truth when it comes to sweet treats, it's that no one can resist desserts in bite-size format. No one.

A British classic goes bite-sized in these adorable mini tarts filled with jam and frangipane and covered with a snowy white icing. Fill with whatever flavour jam you like - raspberry or redcurrant are traditional, but this is also a great canvas for showing off more experimental flavours.

Glaze and Decorate the Tarts: 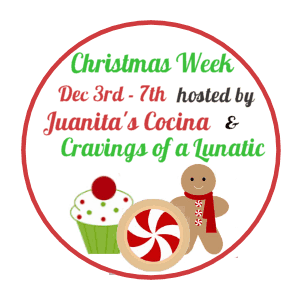 Welcome to day #5 of Christmas Week, a multi-blogger event co-hosted by Kim of Cravings of a Lunatic and Jen of Juanita’s Cocina. Today’s theme is “Christmas Pies and Pastries”. Make sure you visit all the participating bloggers today to see what special dish they whipped up for you: