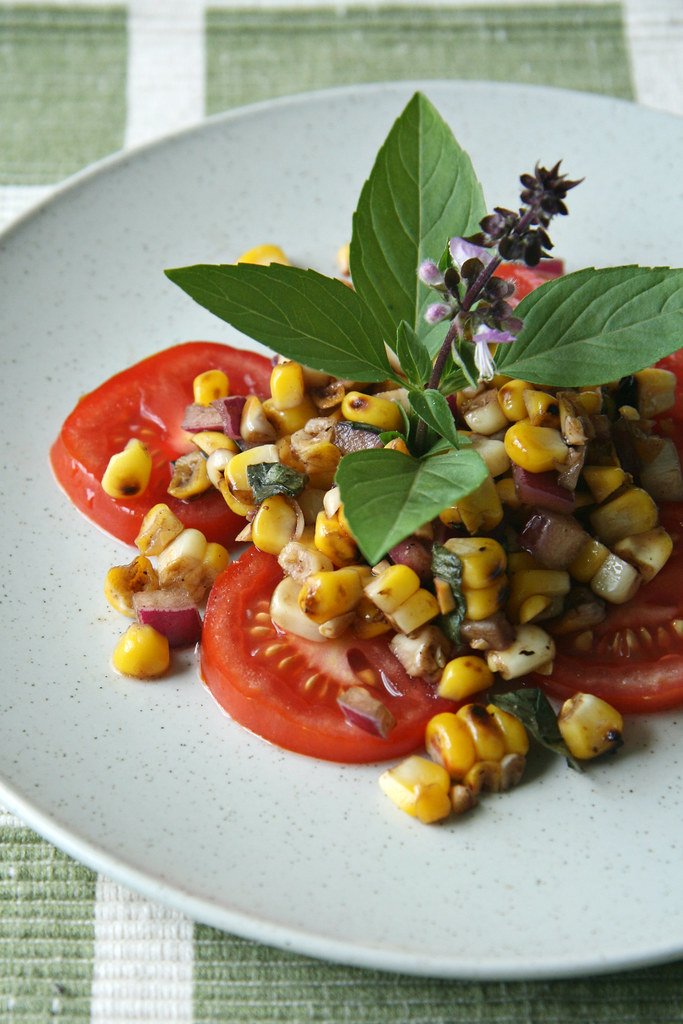 Seems like our flirtation with summer was short-lived... already we're back to a balmy and breezy (with emphasis on the breezy), and watching sunsets at 8pm.

Still, it'll be nice to revisit some of my favourite cool weather things - wearing cozy sweaters and colourful scarves, dusting off my tall leather boots, and making long-simmered braises on the stovetop. Most exciting of all, I'll finally get to wear the hat I knitted back in the spring, in its full lopsided glory!

I give it to November before I get over the novelty and start complaining about how much I miss summer.

In the meantime, we're stuffing ourselves with as much summer produce as we can, since we'll only have a few more weeks to enjoy it. Just last weekend, the local greengrocer was selling giant ears of peaches-and-cream corn at $2 for 7... at that price, it practically feels like we're stealing. (I usually feel that way about my greengrocer, though, because where else could I walk away with two bags crammed full of fresh food for less than $20?)

We charred the corn to play up its sweetness and paired it with fresh tomatoes and basil from our garden to make a simple salad - the perfect accompaniment to an almost-not-summer-anymore meal of garlic-rubbed grilled steak, roasted fingerling potatoes and a loaf of French bread.

I used Thai basil for this salad, because I think its slightly more pronounced anise flavour plays well with the sweetness of the corn. However, if you don't have an overflowing pot of the stuff in your backyard the way I do and/or don't have access to an Asian supermarket, regular basil will do just as well.

Light up your grill or preheat a cast-iron grill pan over medium-high heat.
In a large pot of boiling unsalted water, parboil the corn for 2 minutes. Drain. Brush lightly with olive oil and cook on hot grill, turning occasionally, until lightly charred in spots, about 5-10 minutes. Transfer to a platter.
Once corn is cool enough to handle, cut kernels from the cob and place in a large mixing bowl. Stir in onion, balsamic and olive oil. Toss to coat. Season to taste with salt and pepper.
Cut tomatoes into ½" thick slices. Arrange on six salad plates, and top with a small mound of corn mixture. Garnish with a sprig of basil.