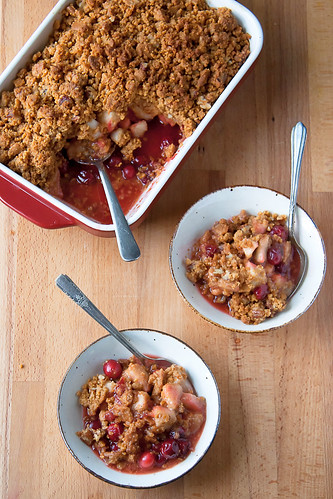 I wanted an easy, low-maintenance sort of dessert, in keeping with my theme of a pared-down Thanksgiving meal for a small group.  In my mind, a crisp fits the bill to a tee.  As desserts go, it's the essence of simplicity - ripe seasonal fruits topped with a crunchy topping, baked until the juices coaxed from the fruit bubble up and stain the edges of the topping, which by then should be a perfect, toasty brown.

It's rather humble and unassuming in appearance, and its pedigree is far more homey rather than haute, but it's still one of my favourite desserts to make when we have guests for dinner because it requires so little effort, leaving me plenty of time and energy to focus on the rest of the meal. 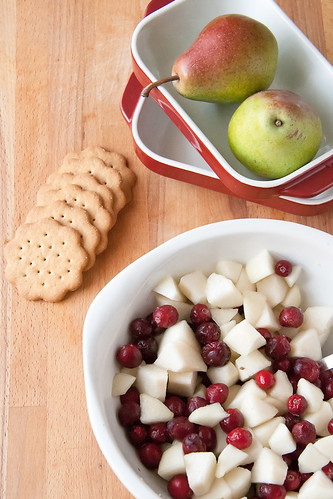 In fact, I've made crisps so often that I don't even bother to measure the ingredients any more - whatever ripe fruit happens to be lying around, chopped up and tossed with a few spoonfuls of sugar and a sprinkling of corn starch, tumbled into a baking dish and topped with a pebbly blend of oats, brown sugar, spices and butter.  It just doesn't get any easier.

Inspired by the beautiful cranberry-red colour of the dishes, I decided to make a cranberry and pear crisp this time around.  I'm a big fan of cranberry desserts, particularly in the fall - I love how they lend a bright pop of colour and a burst of tart flavour to desserts that might otherwise feel too monochromatic and sweet.  Sweet fall pears make up the balance of the filling because I couldn't resist buying a basket of local pears at the greengrocer, though tart apples would have been just as good.

To keep the festive theme going, I replaced my usual topping of rolled oats and brown sugar with a crunchy mix of crumbled gingersnap cookies and chopped pecans, which emerges from the oven as a buttery, nutty shell that starts off crisp and slowly dissolves into sweet softness where it meets the fruit.  If you can't find gingersnaps for whatever reason, crumbled graham crackers or oatmeal cookies would also do the trick... but I really do recommend gingersnaps if at all possible, because their mild spice complements the pear and cranberry so perfectly. 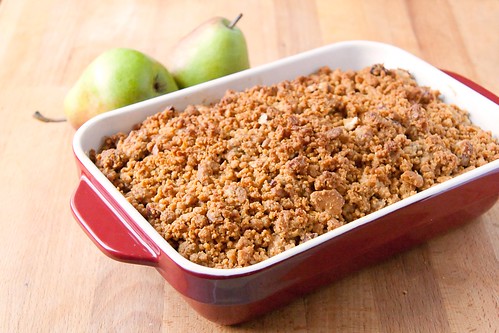 Assuming you're not already stuffed full of Thanksgiving turkey, a scoop of good-quality vanilla ice cream is a very nice addition indeed and elevates a warm-from-the-oven crisp to even greater heights of deliciousness, but the crisp is perfectly delightful all on its own if you can't bear to eat another bite. And leftovers, if you have any? A delicious (though slightly guilt-inducing) breakfast. After all, it's made with fruit... right? 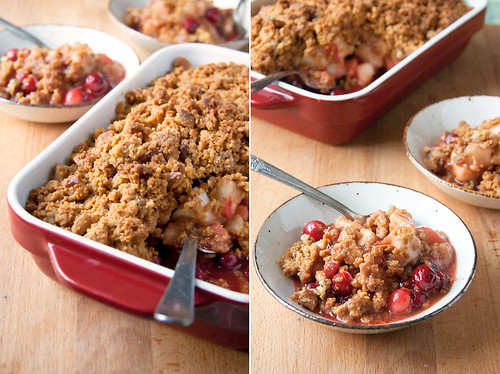