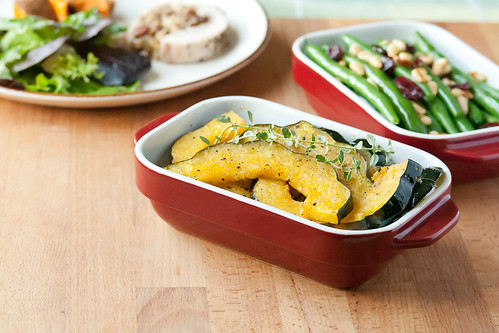 The dishes are all oven, microwave and dishwasher-safe, and they're pretty enough to double up as serving dishes, which means one less thing to wash after dinner. The whole set is also designed to nest together neatly for tidier storage, another bonus for those of us with small kitchens.  All in all, a handy little addition to my collection of bakeware.

Along with the set, I received a slip of paper with the following challenge:

Thanksgiving. To some, Thanksgiving doesn't really have any special meaning, and likely means a box of takeout and a phone call home.  Your mission this week is to create recipes to help such people create new traditions of their own.  From side dishes to the main event - anything goes!

So for my first recipe, I decided to tackle the centerpiece of the Thankgiving spread: the turkey.

Sure, there are plenty of other traditional dishes that some people can't imagine going without at Thanksgiving, like Aunt Mildred's green bean casserole, Aunt Gretchen's marshmallow-topped sweet potatoes and Aunt Hortense's roasted brussels sprouts. 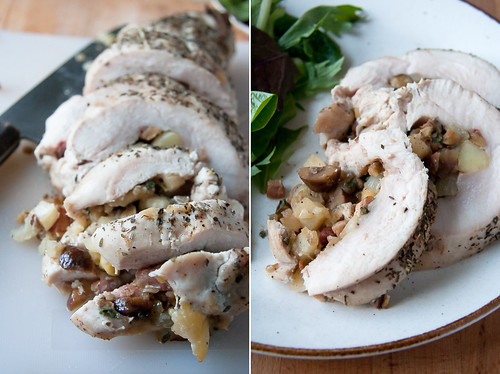 But even Aunts Mildred, Gretchen and Hortense would have to agree that their dishes are merely supporting players for the main event - a stuffed turkey so enormous that even the stoutest of tables groans beneath its weight. You just can't have Thanksgiving without a turkey.

The thing is, when you're doing Thanksgiving dinner for just the two of you, as The Boy and I usually do, the prospect of roasting an entire turkey can be a little daunting.

There's the frantic struggle to clear a big enough space in the refrigerator to let it defrost days in advance. The alarm buzzer at the crack of dawn so that the behemoth-sized bird can be filled with stuffing and heaved into the oven to roast all day. The cavalcade of side dishes to be prepared in the meantime. 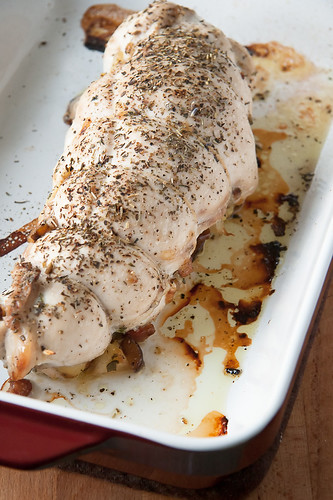 And when it's all over, there's still the leftovers. Oh yes. That neverending stream of turkey sandwiches, turkey casseroles, turkey tacos, turkey soup and turkey a la king for weeks on end, until you start to feel a little like a stuffed turkey yourself.

While I appreciate a challenge as much as the next gal, I still have my limits.

That's what makes stuffed turkey breasts so wonderful. They've got all the perks of a traditional roast turkey (unless you're one of those dark-meat-only people), and none of the drawbacks.  They're easier to carve than a turkey (just slice and go), they're , they're utterly delicious, and best of all, they're a very reasonable size even when there's just two of you. 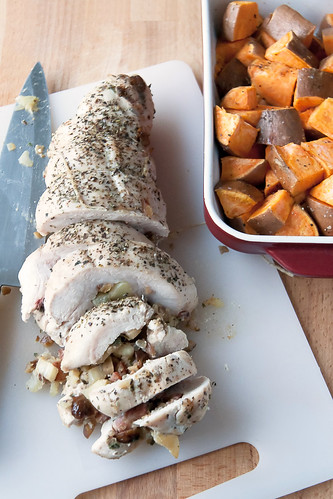 For this recipe, I stuffed my turkey breast with a blend of traditional Thanksgiving flavours like apples, chestnuts, pancetta and sage, and finished it off sprinkle of herbes de provence.

You can find split turkey breasts in the poultry section of most supermarkets pretty much year-round, though more often than not they're sold bone-in and skin-on - I find most butchers will remove the bone for you if you ask nicely enough, or you can debone them yourself using a sharp knife and a steady hand. 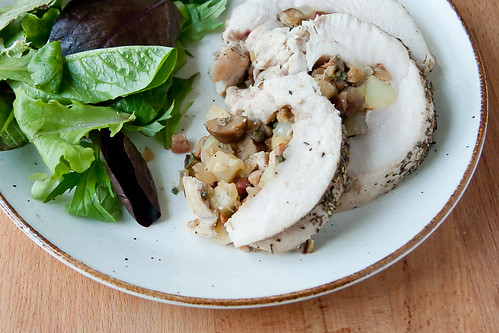 With the addition of a few simple side dishes like roast sweet potatoes, baked squash and steamed green beans with a sprinkle of toasted pine nuts and dried cranberries, you'll have the makings of an easy and elegant Thanksgiving feast that everyone will be thankful for... including you, mostly because you won't be eating turkey sandwiches for the next two months.

PS - Stay tuned for part two of this mission later this week. It involves an easy Thanksgiving dessert that'll round out this meal perfectly!