Of all my missions for the Canadian Tire Kitchen Crew, this one is my very favourite, mostly because it combines two of my of my loves in life - baked goods and a good cup of coffee.  My challenge was as follows:

What's more fun than experimenting in the kitchen?  This week, your mission is to back away from the recipe book and bake treats using our mystery ingredient - coffee! From mild to strong - the level of bold is up to you! So what are you waiting for? Get baking!

To complete this mission, I was provided with a Cuisinart Programmable Hot Water System Coffee Maker. 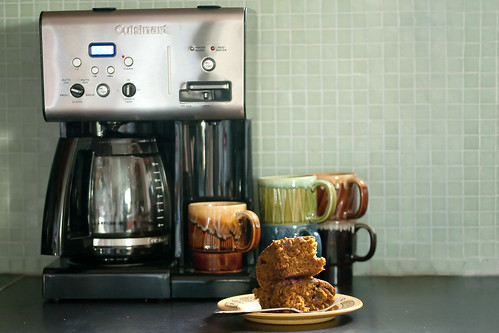 Its arrival was cause for much rejoicing, because our drip coffeemaker had gone to the big coffeehouse in the sky several months ago, and I'd been dithering about buying a replacement.

In the meantime, we'd been making do with americanos when we felt like firing up the espresso maker and french press coffee the rest of the time... but while both are perfectly cromulent coffee brewing options, sometimes a girl just needs a big pot of proper North American drip coffee.

The biggest feature of this particular Cuisinart model is the fact that it's divided up into two sections.  On the left is the coffeemaker, and on the right is a hot water dispenser. 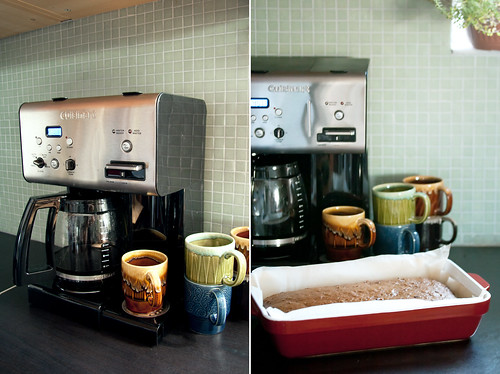 In terms of the coffeemaker half,  I have to admit being thrown off by all the different buttons and knobs and dohickeys on the display, since I've never owned a coffeemaker equipped with anything more than an "on/off" switch.  After some head-scratching, I eventually resorted to reading the manual to figure out how to actually use my new toy and was rewarded with a great pot of coffee. Definitely not what you want in a coffeemaker when you're under-caffeinated and just want a damn cup of coffee already.

That said, I do like that among all those buttons is a timer function that ensures I'm greeted by a full, hot pot of coffee in the morning, because I don't think I could manage to operate the machine when I'm in a half-asleep pre-coffee state.  And the auto-off is kind of handy, at least for me, seeing as I'm forgetful even when caffeinated. 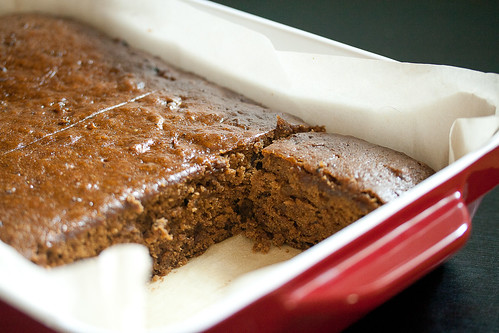 As for the hot water dispenser, it's not really my cup of tea (if you'll pardon the pun).  It feels superfluous for a home kitchen - it isn't any faster at boiling water than my regular electric kettle, and I don't need instant access to boiling water so badly that I'd consider keeping it turned on all the time.  I suppose it might be useful in an office setting where the machine would essentially be turned on all day anyways, but for most homeowners I'd suggest grabbing the Cuisinart Brew Central Coffee Maker instead (it's essentially the same machine, sans hot water dispenser) and using the extra $30 to buy a kick-ass kettle. 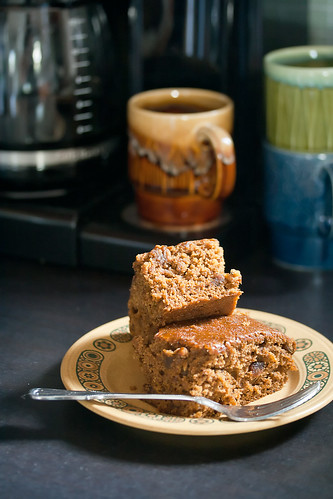 Despite those minor nitpicks, I must say the Cuisinart Programmable Hot Water System Coffee Maker does perform admirably where it matters most; it brews an excellent cup of coffee. Which is handy, because that's exactly what you need to make this sticky, gooey British-style gingerbread.

This recipe started with a cold, rainy Friday last week.  It's the kind of fall weather that makes me want to spend the day than curled up on the couch with a good book, a cuddly cat, a big mug of hot coffee and a big chunk of sticky gingerbread topped with a dollop of whipped cream.  Not that I could do any of those things, since I had to go to work instead, but a girl can dream... right?

That craving still lingered the following morning, despite the fact we were blessed with a warm, sunny Indian summer sort of Saturday that rarely comes along in late September. Not exactly gingerbread weather any more, but I didn't care.  I wanted gingerbread. 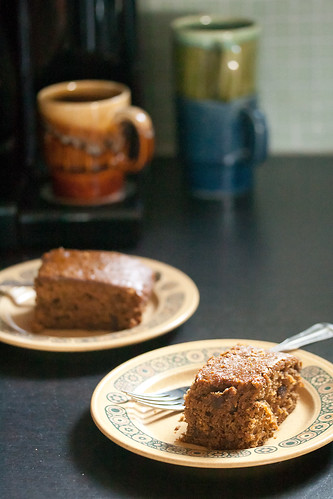 I started off with my usual gingerbread recipe, which yields a perfect British-style gingerbread - a dense, pillowy soft, incredibly moist cake, with a hint of molasses and warm, gingery spices.  I then replaced most of the liquid in the original recipe with coffee and, inspired by sticky toffee pudding (another British classic), added a handful of chopped dates to the mix.  All it took from there was the remainder of my usual ingredients and few quick stirs with my trusty wooden spoon to yield a glossy dark brown batter speckled with bits of date.

What emerged from my oven almost an hour later is a soft, sticky gingerbread that's just as good, if not better, than the original.  The coffee and dates flavours aren't particularly noticeable - rather, they give the gingerbread a subtle depth, a roasty sort of richness that underpins the dominant flavours of molasses and spice. Exactly what I was craving, and then some.

And with the weather channel calling for the cold, wet, blustery fall weather to return over the next few days, I've got a forecast of my own: more gingerbread! 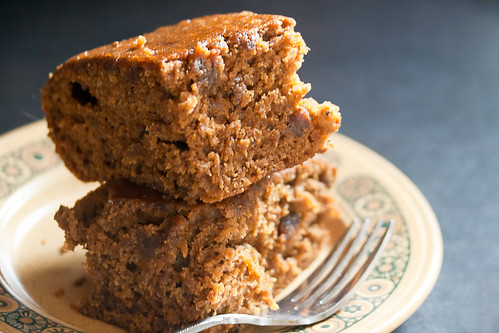