Home » appetizer » dips and spreads » When I Dip, You Dip, We Dip: Muhammara (Roasted Red Pepper and Walnut Dip) 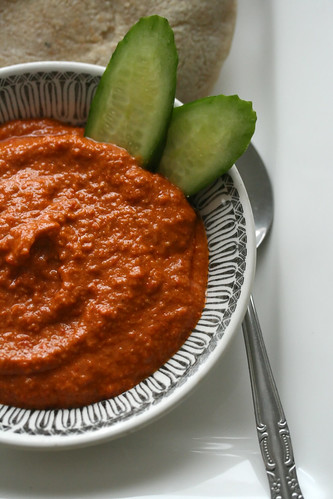 With the Golden Globes kicking off the awards season this weekend, everyone and their brother seems to be talking about the must-serve cocktails and nibbles for awards-watching parties.

Fear not, gentle readers. I'm not jumping on the bandwagon of silly themed recipes... there will be no Blackberry Swan Pavlovas, no Mad Men Martinis, and definitely no King's Peach Pie. On the other hand, this seemed like as good a time as any to add a few more recipes for party-friendly finger foods.

Muhammara is one of my latest favourites. It's no secret that I love dips, especially ones with a Mediterranean or Middle Eastern flair... so it's pretty much a given that I'd fall head over heels with this rich mixture of red peppers and walnuts. It also helps that it takes all of 15 minutes to make, and is both vegetarian- and vegan-friendly (which is awfully appealing if you have as many veggie friends as we do). 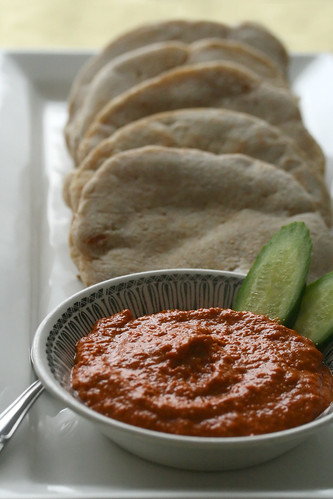 The flavour of muhammara is more than the sum of its parts - this Mediterranean take on roasted red pepper dip is a balance of bitter and sour and garlicky and sweet, deep and complex, and utterly beguiling. I tend to lose myself in the eating of it... so much so that sometimes I realise I'm mopping the last few streaks from the bowl without any memory of having eaten the whole thing.

The reason, I'm sure, is pomegranate molasses. Made by boiling down pomegranate juice until it is reduced to a thick molasses-like concentrate, this dark brown syrup is an essential ingredient in many Middle Eastern cuisines. The resemblance to molasses is only superficial - the flavour lies somewhere between tart and bittersweet, almost like a well-aged balsamic vinegar.

I usually purchase mine at a Lebanese-run corner market, but in a pinch, it's also possible to make homemade pomegranate molasses by cooking down bottled pomegranate juice until it become thick and syrupy.

The best partner is tender homemade pita (whole wheat, if possible) or thin sheets of sesame-studded lavash, but it's also quite delicious with a crudite platter of cucumbers and carrots and cherry tomatoes if you're looking for a nice change from the usual sour-cream-and-onion-soup dip.

This Mediterranean version of the roasted red pepper dip adds lots of garlic, lemon juice, pomegranate molasses and walnuts, for an addictively delicious combination of sweet, salty, sour and bitter.