While you're out buying your Halloween supplies over the next couple of weeks, it might be worth giving those little pie pumpkins in the produce aisle a second look. 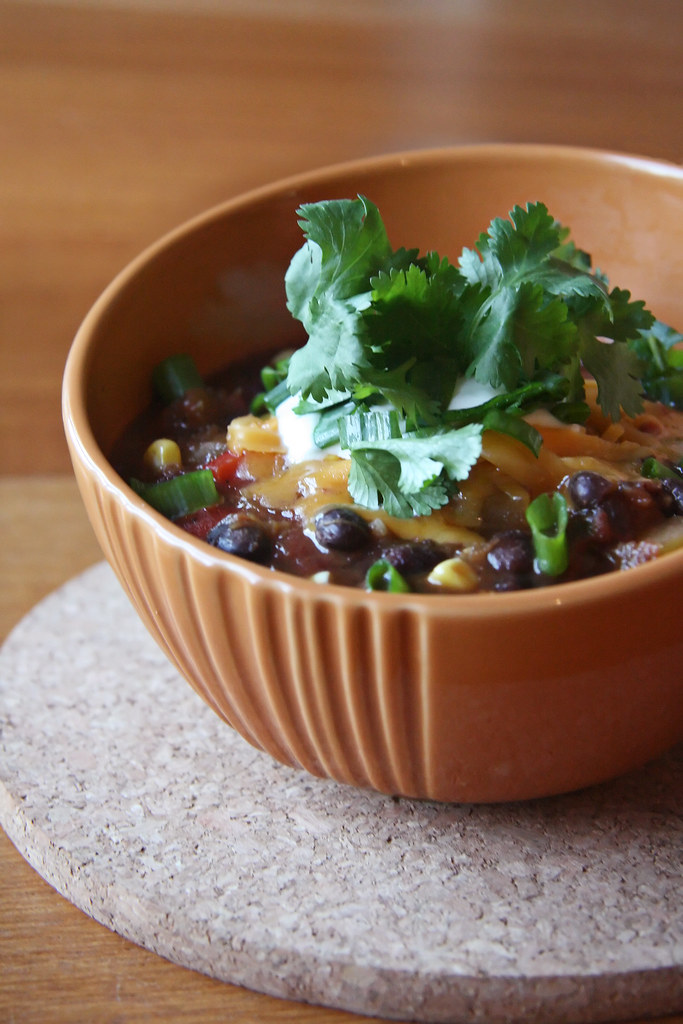 Sure, you can use them to make adorable mini jack-o-lanterns or pumpkin pie (as might be obvious from the name), but why not try something new and make a delicious vegetarian chili instead? It comes together in a jiffy, so you can still have plenty of time for ghost hunting, pumpkin carving, chocolate eating, trick or treating, or any other ghoulish activities you have in planned for All Hallows Eve.

The inspiration for this dish came from this month's Royal Foodie Joust, run by the Leftover Queen. The rules are simple... each month, food bloggers are given three ingredients as a starting point and are dispatched to their kitchens to come up the most creative and delicious dish they can think of using those ingredients. For October, the challenge was to make a black and orange Halloween dish using pumpkin, dark beer and sugar.

Since it's been a chilly fall thus far, it only seemed appropriate to make a fall chili using the challenge ingredients... and boy oh boy, this one's a winner (or so says The Boy). It's sweet, smoky, spicy and soothing, and it's as far from pie as pumpkin can get.

Note that the recipe calls for two chipotle peppers, because we loves us a spicy chili... however, if you prefer to walk on the mild side, feel free to go with just one pepper (or even one half). Meat eaters can also boost the smokiness by adding chopped bacon to the pot along with the onions.

To make the pumpkin easier to cut, pierce with a fork a few times and microwave on high for 1 minute. Set aside to cool.
Once pumpkin is cool enough to handle, cut in half. Scoop out and discard the seeds (or save them to make toasted pepitas), then cut each half into six wedges. Using a sharp paring knife, cut the peel from each wedge, then chop into ½" cubes.
Pour the olive oil into a large heavy-bottomed pot set over medium-high heat. Add onion and saute until soft and translucent, about 5 minutes. Add garlic and squash, and continue cooking for another 5 minutes, or until onion is golden. Stir in tomatoes, beans, beer, brown sugar, spices and chipotle peppers.
Bring the chili to a boil, then reduce heat to low and simmer, covered, for 25 minutes or until the pumpkin is tender. Stir in red pepper and corn, and continue simmering for another 5-10 minutes or until corn is bright yellow and peppers are soft.
Serve piping hot with your favourite chili garnishings - grated cheddar, sour cream, chopped cilantro, green onions or all of the above (which is my personal preference).

« Get Stuffed!: Stuffed Eggplants with Lamb Filling
The Apple of My Eye - Caramel Apple Cupcakes »
205 shares