It's amazing how many memories can be tied up with a particular flavour. 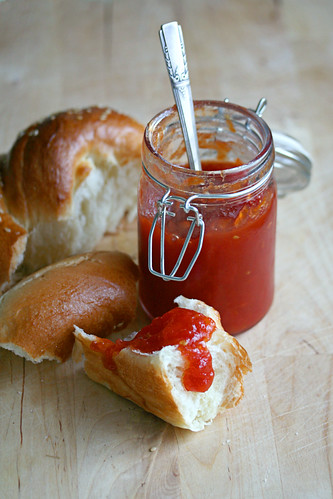 A few years ago, as The Boy and I sat down to eat breakfast in an adorable little inn in a tiny Andalusian town in Spain, a trio of tiny dishes were set down on the table, each filled with a spoonful of homemade jam.

To accompany them, a basket of fresh bread and a plate of local cured meats and cheeses. A continental breakfast, they'd called it, though it bore little resemblance to the dry, hard rolls and single-serve packets of grape jelly that I tend to associate with the term.

It was those three little anonymous dollops of jam that caught my eye, unlabelled and unnamed as they were. The first two I could identify by sight - quince jam, thick and grainy and dark umber in colour, and orange marmalade, pale orange and speckled with shreds of bitter orange peel. The third remained a mystery, though, with a brilliant brick-red colour and a beguiling spicy-sweet flavour.

I could taste hints of cinnamon or cloves, and a little lemon as well... but the dominant flavour remained frustratingly elusive. It was quite literally on the tip of my tongue, but slipped out of reach each time I came close. 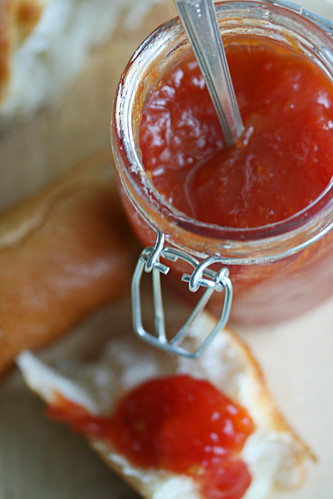 And then, a few bites later, that nearly-forgotten memory floated to the surface. "Tomato!" I said. "It's TOMATO jam!"

It was a jam my great-aunt-some-degrees-removed used to make when I was wee, but that I hadn't tasted in at least a dozen years by then.

Packaged in that memory were slices of toast smeared with a thin layer of tomato jam eaten at the kitchen table, an apple-cheeked face with a pair of twinkling eyes and a broad sunny smile, and the warm hugs she always had for her little "Isabelinha" - the childhood nickname she used for me even when I went back to visit her in Portugal as a full-grown woman, as we sat in her farmhouse kitchen picking over peas which would be braised with eggs and chourico for our lunch.

And so it is that tomato jam will always taste like more than just tomatoes and spice, but also like the happiness that can be found in bountiful embraces, Portuguese farmhouse kitchens and romantic Andalusian breakfasts for two. It's good stuff.