Some combinations are so perfect that they're almost synonymous with each other.

For me, summertime and lemon is one of those combinations - my memories of childhood summers are filled with tall pitchers of pale pink lemonade ever-present in the fridge, crinkly packages of lemon-scented "S" cookies and the mouth-puckeringly tart lemon sorbet that emerged from my parents' Donvier hand-crank ice cream maker. 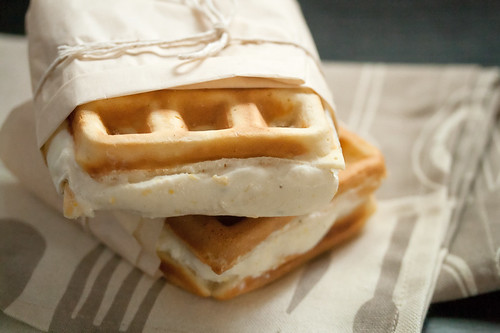 There was great prestige in being the one who got to turn the crank handle on the Donvier, so the privilege was diplomatically doled out between my sister and myself.  I have to admit I had a moment of childish glee when I bought a Donvier of my own a few years ago, and realised I wouldn't have to compete with anyone over cranking rights. :)

Sometimes it's nice to sit back with a cold drink and let the machine do the hard work on its own, though, which is why I jumped at the chance to try out the Cuisinart Pure Indulgence™ Frozen Yogurt-Ice Cream & Sorbet Maker . With a generous 2 quart capacity, a heavy-duty motor, and a large ingredient spout built into the lid for last-minute mix-ins, this is an ice-cream lover's dream machine. 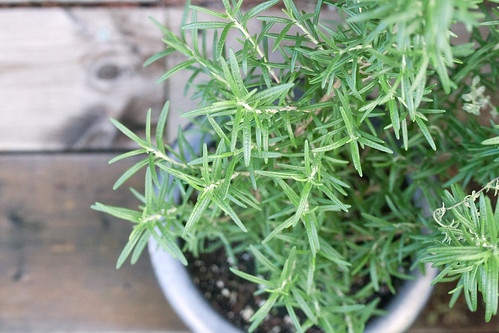 I thought long and hard about the right flavour for our new ice cream maker's maiden voyage, and eventually settled on this Lemon-Rosemary Gelato as a nod to my still-puckery memories of lemon gelato.

I know the combination of lemon and rosemary seems oddly savoury at first glance, particularly when paired with olive oil waffles as I've done here, but this trio is not at all unusual in Italian desserts - think citrus-scented olive oil cakes with a hint of rosemary, or tangy lemon-rosemary granitas with olive oil cookies. 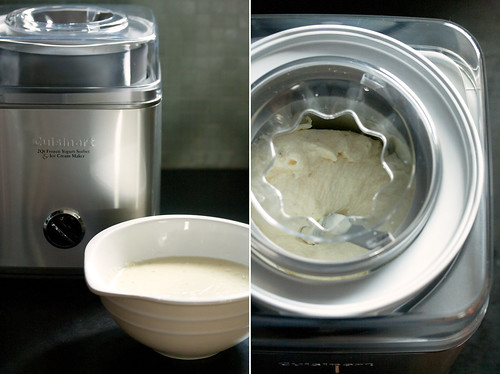 I borrowed part of the technique for the gelato from David Lebovitz, who uses the lemon-sugar trick to make his Super Lemon Ice Cream in The Perfect Scoop - whizzing the lemon zest and finely chopped rosemary into the sugar allows the flavours to infuse throughout the finished gelato, creating an unmistakeably lemony flavour touched with just the faintest hint of rosemary.  Stirred into a very simple rosemary-infused gelato base, the end result is light, creamy gelato with a pure unmuddled flavour and an almost ethereally fluffy texture thanks to the continuous churning motion of the Cuisinart. 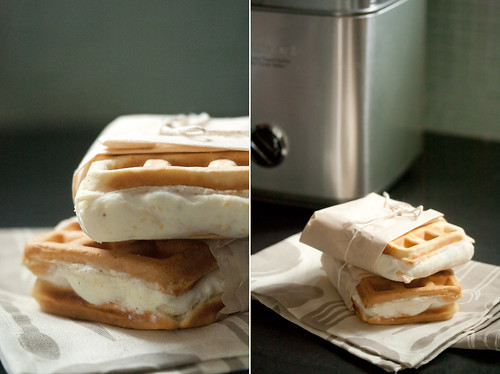 BTW, you might notice I'm using a slightly unusual gadget to make my waffles. Yes, the Cuisinart Griddler can make waffles too!  All it takes is a set of special waffle plates, which transform it into a lean, mean, waffle-making machine that turns out four perfectly golden Belgian-style waffles at a time.  As if I didn't have enough reasons to love my Griddler as it is! 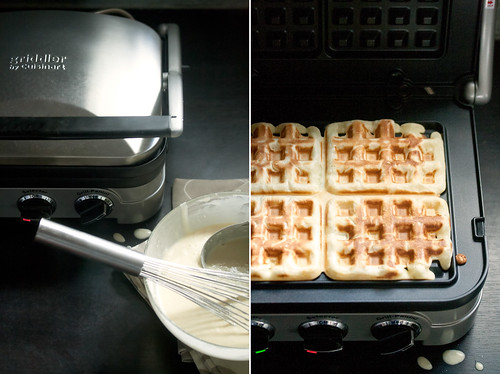 Yep. Some combinations are just meant to be - a tall glass, clinking ice cubes and a pitcher of pink lemonade; rosemary sprigs, fresh lemons and olive oil; and a Griddler, waffle plates and an ice cream maker. It's a perfect summertime trifecta.

Disclosure:
I was provided with a Pure Indulgence™ Frozen Yogurt-Ice Cream & Sorbet Maker and Griddler waffle plates by Cuisinart Canada in exchange for creating this post. All opinions are 100% mine.