Do you have a particular food that you hoard in massive quantities because you're afraid you might run out one day and not be able to get more right away? 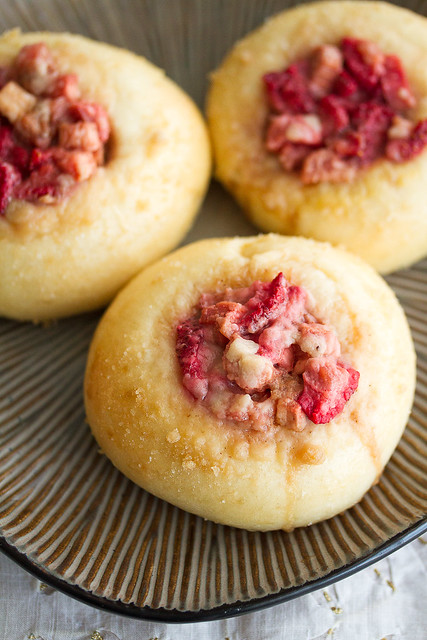 I'm like that with rhubarb. Every summer, I cram as many large bags full of chopped rhubarb as I can fit into my freezer to tide me through until the next spring, just like a squirrel stashes away nuts to last through the winter.

(If squirrels had little squirrel-sized semi-detached houses with chest freezers in the basement, that is... which they don't, though probably not for lack of trying.)

And every year, I can't bring myself to dig into my stockpile until it's almost rhubarb season again, because I'm so afraid of running out before I can get more. 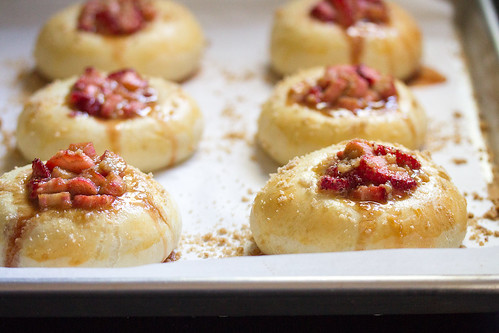 What can I say? Some people collect little porcelain figurines... and I collect mass quantities of chopped rhubarb. I can stop anytime I want, though. Honest.

There are some things that are delicious enough to convince me to dig into the stash a little early, though.

One of those things is my newly-discovered obsession, the home-fermented rhubarb soda from Batch. The other is these delicious pillowy soft sweet buns that gently cradle a juicy strawberry and rhubarb filling, perfect for springtime brunches or afternoon teas or just for the heck of it when you need a tasty treat. 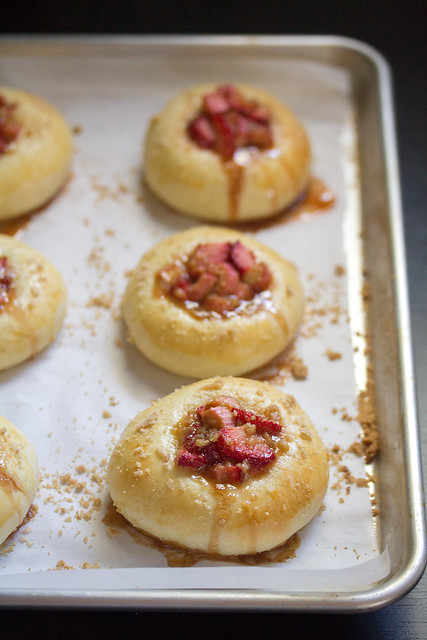 I've borrowed my inspiration for these buns from a traditional Czech treat known as kolaches, which is also apparently quite popular in Texas and the Midwest.

While the dough and streusel have stayed true to my original inspiration, the filling of fresh strawberries and rhubarb is completely different from the sweet cheese and cooked fruit fillings that are typically used... though I'd like to think it's just as delicious (if not better... but that might get me banned from most of Texas.)

If you don't happen to have a rhubarb stash of your own, feel free to substitute with a blueberries or cherries or whatever tender seasonal fruit you happen to have kicking around... though for me right now it's basically going to be the strawberry-and-rhubarb show in my kitchen for the next few weeks until I get my fill. 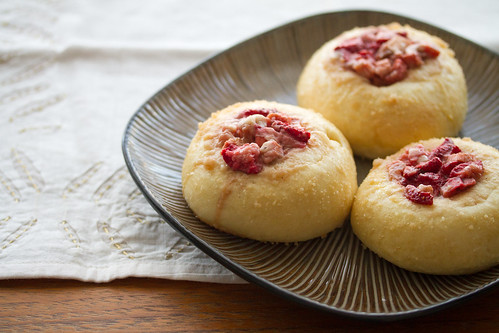 The end result is not quite a sweet bun and not quite a donut, but an entirely delicious hybrid of the two that I absolutely don't mind making again and again, even if it does put a dent in my precious stockpiled rhubarb.

Just make sure to let them cool off to room temperature before digging in, no matter how golden and tempting they might be, lest you burn your tongue on bubbling hot strawberry-rhubarb juice. Not that I'd know from experience or anything. Nope. Not at all.

These pillowy soft pastries filled with fresh strawberry and rhubarb are not quite sweet buns and not quite baked donuts, but rather an entirely delicious treat that combines the best of both worlds.

Fill and Bake the Buns:

I'm teaming up with the Canadian Food Creatives crew to share all sorts of berry-licious treats, just in time for strawberry season! Make sure to check out all of their posts for this month's roundup: 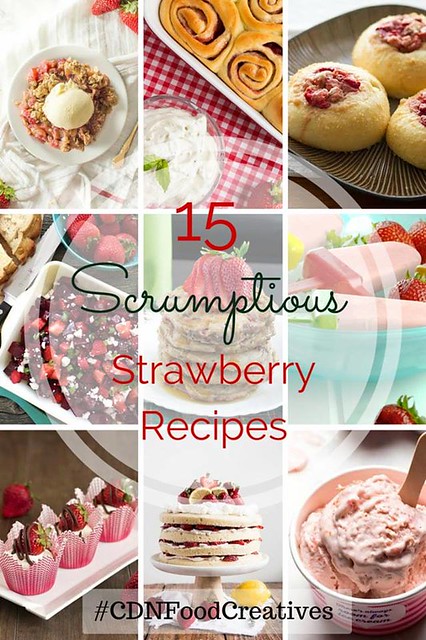