One of the things I love most about my backyard is the overgrown patch of raspberry canes that just gets bigger and bigger each year. This summer, it's gotten so big that it's completely taken over the space beside the back gate, leaving me literally knee-deep in juicy red berries once raspberry season rolled around. 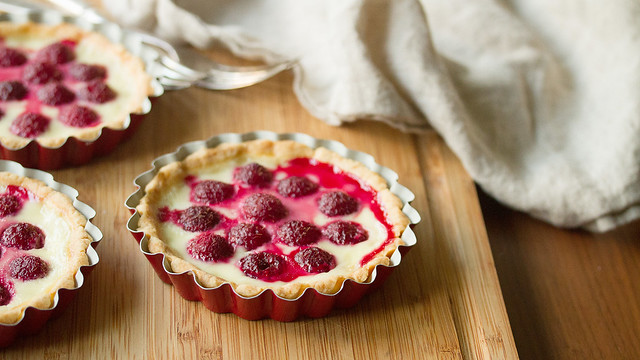 It meant that for a few glorious weeks this summer, I had more raspberries than I knew what to do with. I ate them by the handful. I stirred them into muffins. I cooked them down into a gorgeous batch of raspberry-cocoa jam.

And like every other year, I couldn't stand to look at another raspberry after about two weeks of this neverending raspberry binge.

But as tired as I am of raspberries right now, I'd happily eat a dozen more of these custard-filled raspberry tarts, because they are just that dang good.

Because who can say no to a delicate buttermilk custard base polka-dotted with fresh raspberries, especially when it's nestled in a buttery shortcrust tart shell? Not me, that's for sure. 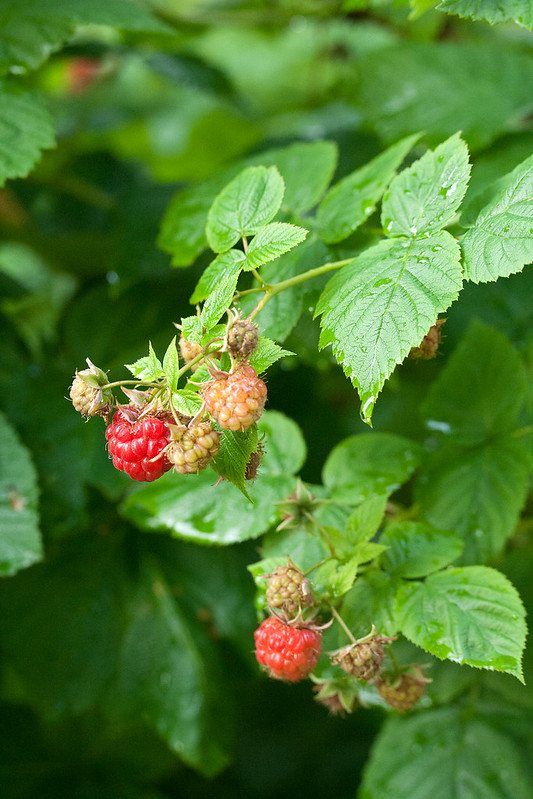 A little Background on This Recipe

This recipe is basically a slightly more glamorous take on a classic raspberry custard pie. It has the same combination of buttery crust, silky custard and fresh raspberries, except it's all baked up in a pretty individually-sized tartlet.

The inspiration for the filling comes from one of my favourite classic Canadian cookbooks, Food That Really Shmecks by Edna Staebler. It's a collection of no-nonsense recipes, techniques and anecdotes that Edna compiled based on her time living with an Old Order Mennonite family in Waterloo, Ontario learning all about their traditions.

It reads like a conversation with a good friend, who just happens to be charming and knowledgeable and full of personality, and whose recipes aren't necessarily showstoppers but can always be counted on to be delicious and perfect every time. (In case you're curious, "shmecks" means "tastes" in German.) 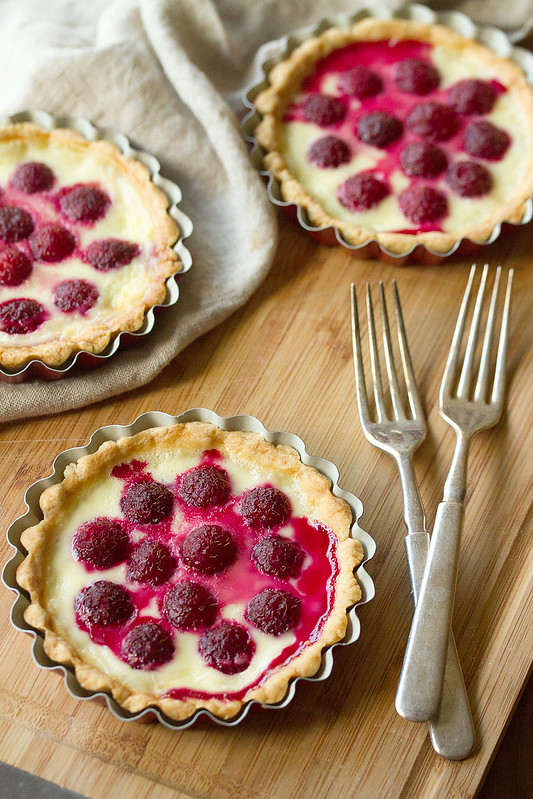 My beloved copy was a lucky find at Goodwill. It's technically secondhand, but the previous owner hadn't even cracked the spine, which means I basically scored a nearly-new copy for all of $10.

The first recipe I ever made after bringing it home was the Custard Pie, using a recipe Edna learned from her mother. It's a recipe I've gone back to a few times over the years, because it's such a simple way to show off whatever delicious fruit is currently in season.

The original pie filling is perfectly lovely exactly as written, but I've learned that using a combination of buttermilk and cream rather than plain old milk creates a richer custard with a subtly tangy flavour that's perfect for pairing with raspberries. 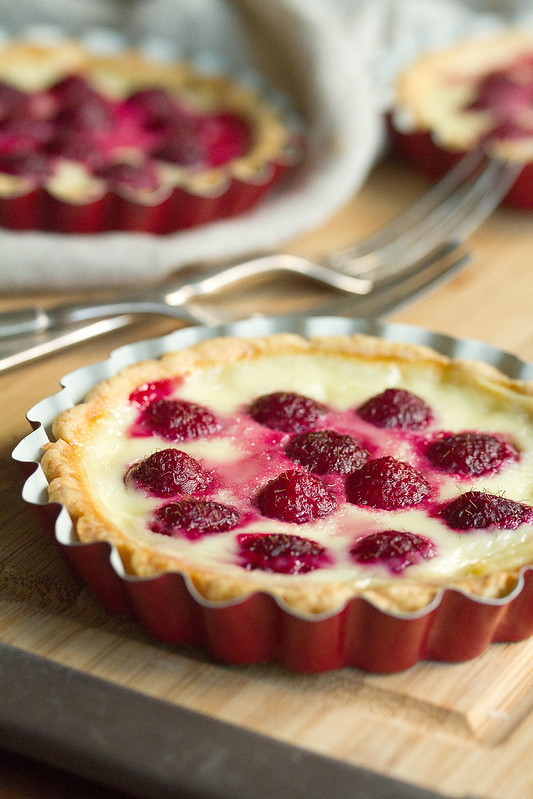 You might think the raspberries are the star of the show here, but the reality is that a tart is only as good as its base. That's why I like to use a shortcrust pastry base. It's less temperamental and more forgiving than a traditional pie dough, and what it lacks in flakiness it more than makes up for with its rich, buttery flavour.

My favourite sweet shortcrust recipe comes from my friend Mardi Michel's cookbook, In the French Kitchen with Kids. I've previously posted about it when I wrote up a review of the book and shared Mardi's super-easy recipe for Mini Jam Tarts, but it's a great all-purpose dough for any sort of sweet tart.

The biggest change I've made is to prep the dough using a food processor, because I'm lazy that way, but otherwise it's pretty much unchanged. It's basically a foolproof recipe that bakes up buttery and flaky and delicious every time.

It works so perfectly because it relies of whipping cream instead of water, which adds extra richness and also reduces potential for gluten formation, which can result in tough pastry. Aside from that, the only other requirement is to make sure you work the dough as little as possible - as soon as it starts to come together into a ball, it's ready to go. 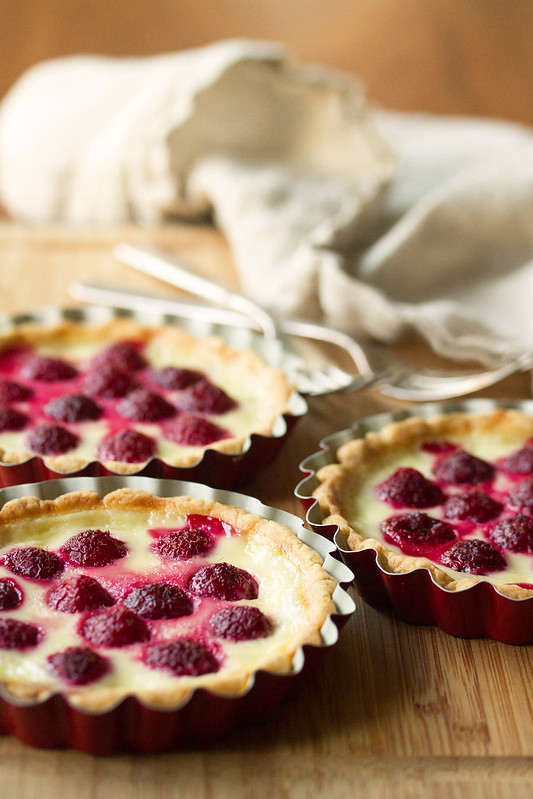 Other Variations to Try

Raspberries are my favourite option for these tarts, because I love the way the bright red berries create a polka-dot pattern against the pale yellow custard.

However, if you're feeling creative, this recipe also works beautifully with other summer berries, especially blueberries or blackberries. Other options include pitted halved cherries, thin slices of ripe peach or apple, or tender shoots of early spring rhubarb.

For a winter version, Edna recommends using dried raisins or currants that have been soaked in warm water until plump, or going with a simple plain custard pie by adding ½ cup more milk and dusting with a dash of nutmeg and cinnamon.

But since we're smack in the middle of raspberry season, I really do suggest starting there, even if you've already gotten to the point where you've sworn you couldn't possibly eat another raspberry. I promise you won't regret it.

These elegant little tarts pair a buttery shortcrust pastry base with a buttermilk custard filling and a polka-dot pattern of fresh raspberries, for the perfect ending to your summertime dinner party.

Assemble and Bake the Tarts: