This month, my assignment was Sweet As Sugar Cookies, a blog by Lisa in Hawaii.  As you might have guessed from her blog name, Lisa is all about sweet treats and desserts, though she does have a handful of savoury recipes to balance things out. :) What's I particularly liked about this month's assignment is that Lisa had my blog back in July, so it's fun to return the favour so soon after - check out her version of my Gingerbread Biscotti! 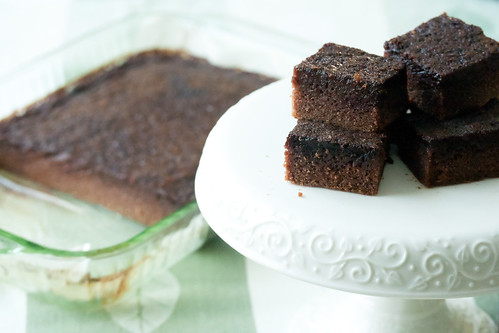 Obviously, there was no question that I should make a dessert this month, but I still had a pretty tough time narrowing it down to just one considering there are literally dozens of different treats to choose from.  Out of all the choices I had on my shortlist, it was the Cocoa Mochi that intrigues me the most, mostly because I've never tried mochi in cake form before. (And also because I happened to have a wicked bad chocolate craving at that moment in time).

According to Lisa's blog, mochi are a popular dessert in Hawaii, where they come in all kinds of flavours.  I wish I'd know about these gooey, buttery treats before my trip to Hawaii last fall, because even though I thought I'd managed to cram every possible Hawaiian delicacy into my mouth, I somehow didn't get around to mochi. (Of course, I did manage to eat malasadas, li hing mui gummies, spam musubi, sweet bread, mac salad, kahlua pork, loco moco, manapua, Portuguese sausage, saimin, and several kinds of poke... so I think I still did a pretty good job, all things considered. It's a wonder I didn't come home a hundred pounds heavier, honestly.) 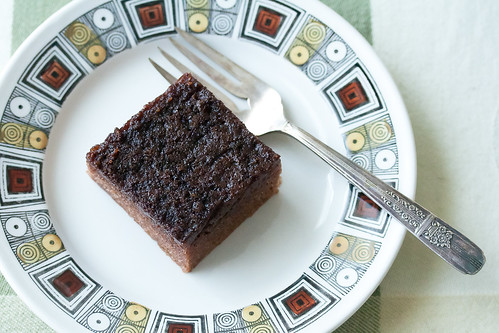 Unfortunately, I still can't say that I've tried mochi, because I made a major mistake with this recipe.  It's totally my fault, though - in my enthusiasm to make these babies, I bought regular rice flour instead of mochiko rice flour, not realising the two are actually quite different. Yes, that's right... there are different kinds of rice flour. Who knew! (OK, probably everyone but me. But now I know.)

So, much to my dismay, I didn't get the dense and slightly chewy mochi cake I was expecting based on Lisa's descriptions. Instead, I ended up with something a little closer to a light, fluffy chocolate cake that separated into a custardy pudding-like layer on the top as it baked. Still, while it might not be mochi at all, it was downright delicious served slightly warm with a scoop of vanilla ice cream - rich and buttery, crisp and slightly chewy around the edges, and with a not too sweet chocolatey flavour with a hint of coconut. 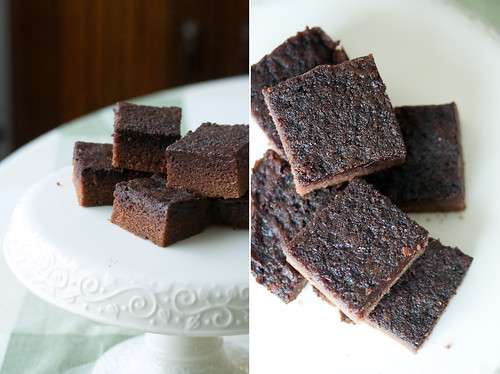 Aside from my mistake with the flour, I also made a few intentional changes to Lisa's original recipe - I used slightly less sugar, added a dab of vanilla extract, traded partly skimmed evaporated milk for the full-fat kind, and swapped around the amounts of coconut milk and evaporated milk based on the can sizes sold here in Canada (it basically evens out, since my coconut milk was 14 oz instead of 12oz, and vice-versa for the evaporated milk). 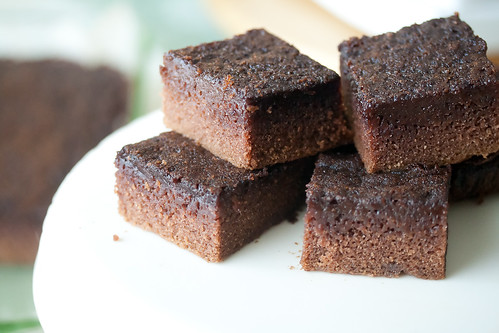 So, while I still can't scratch mochi off my bucket list, I'm still pretty happy with whatever it is that I did make. It's pretty much a win-win, as far as I'm concerned - aside from getting to eat this delicious cake, I also have an excuse to make it again (only with the right kind of flour, for a change). Not bad for an accidental kitchen mishap! :)

(PS - If you actually want to make proper mochi, make sure you buy the right kind of flour - depending on where you're shopping, it may be sold under the name "sweet rice flour", "glutinous rice flour", "mochi flour" or "mochiko". To get these fluffy pudding-cake bars, use regular rice flour instead.)