Would you look at that?  It's already time for another installment of the Secret Recipe Club. If someone can tell me where the hell November went, I'd really appreciate it... it feels like my last SRC post was just a week ago! 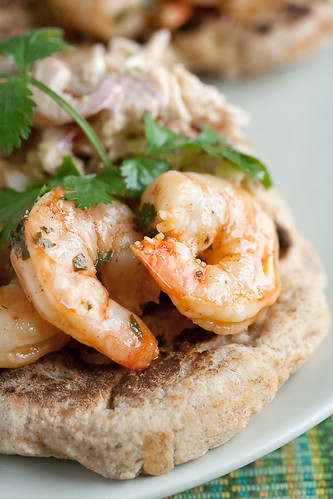 Anyway, my assigned blogger for this months' Secret Recipe Club is Susie at Eat Little, Eat Big, who hails from the island of Maui in beautiful Hawaii.

Her blog is just a little over a year old, but it's already chock-full of delicious healthy recipes covering a wide range of dishes and cuisines, plus loads of food-related photos from her travels. Pretty impressive, especially compared to the 40-something posts with cringe-worthy photos I managed to scrape together in my first year of blogging. :)

There were lots of recipes that caught my eye when I first browsed Susie's blog (including some Bacon, Egg and Cheese Scone Muffins that I plan on trying next time I'm making a big pot of chili), but since I happened to have a bag of shrimp in the freezer that were just begging to be turned into something delicious, I decided to go with her recipe for Chile Lime Shrimp Naan Wraps... and boy, was I ever happy I did! 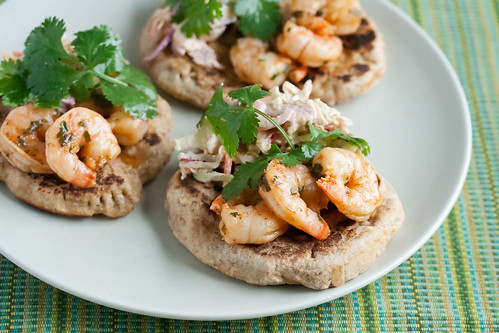 The marinade gave the shrimp a really great hint of smoky heat, along with fresh pops of lime and cilantro that accented their natural sweetness. Wrapped up in pillowy-soft freshly-baked Red Fife naan (made using Indian Simmer's Homemade Naan recipe from Tasty Kitchen) and accompanied by a quick coleslaw dressed in a creamy yogurt-based chile-lime dressing, they were gobbled up in a matter of minutes.

Now, if you took the time to check Susie's site before reading this far, you probably know that her recipe didn't include any coleslaw... but I never pass up an opportunity to shove more stuff into my sandwiches, and coleslaw is a seriously under-appreciated sandwich filling, in my opinion. 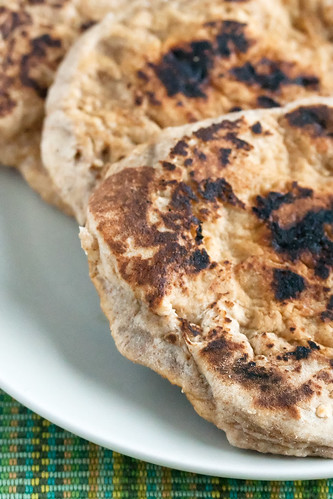 And besides, in Baja California, shrimp tacos are usually stuffed with shredded cabbage, so this just seemed like the next logical step in the whole fusion-shrimp-taco concept - especially because the cool, crunchy slaw works so well as a contrast to the shrimp and the naan, both in terms of temperature and texture.

That said, feel free to omit it if you're not a fan of coleslaw, and swap it out for the spoonful of yogurt (or sour cream) that Susie uses to top her version off. I can vouch for the fact that they're pretty darn delicious eaten that way, too. :)

Along with a few wedges of avocado drizzled with lime juice, it was exactly the kind of dinner I was craving on a dark, rainy, almost-winter evening - fast, flavourful and fresh. Thanks, Susie!