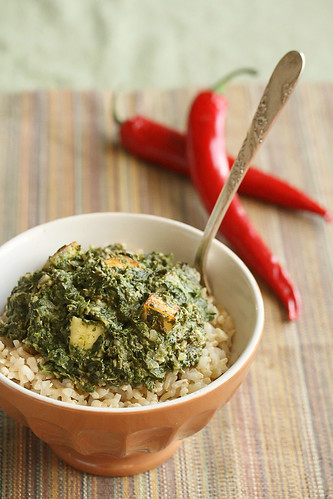 There it sat, all by its lonesome among the packages of firm tofu - a single block of fresh paneer, a little off-white block of dairy goodness hiding among the soy.

How that package of paneer came to be in the health foods display at my local Loblaws, among the fruit smoothies, faux meat products and various consistencies of tofu is still beyond me, but there it was nonetheless. I figured that it was my responsibility to rescue it, before the tofus could realise an impersonator lurked among them.

So I took the paneer home, and did right by my new friend by cutting it into little cubes which I pan-fried into lovely golden-crusted perfection. Then, I introduced it to a few of my old friends - fresh spinach, onions, spices, yogurt and cream - to make the traditional Indian dish known as saag paneer (or palak paneer, as it seems to be called the other half of the time).

This recipe is an amalgam of a handful of different recipes collected from various sources, though it probably owes the most to Madhur Jaffrey's, especially in terms of the cooking technique.

I'm sure all my meddling probably means it's rather inauthentic, but it's exactly the way I like my saag paneer - soft, thick and creamy, with a chunky sort of texture rather than the smooth spinach puree found in some interpretations. And no tomatoes, because while there are plenty of places that tomatoes belong, this isn't one of them. It's Indian comfort food at its best. 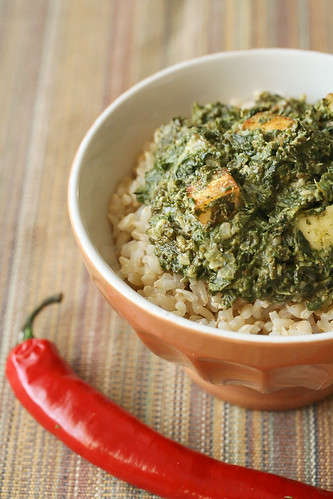 I'll admit, it's not exactly a low-fat meal, what with the cheese and the yogurt and the heavy cream... but then again, that's exactly why it's so damned delicious. Plus I can still feel virtuous because it's much healthier than the drowning-in-ghee version at my favourite Indian buffet, especially when I serve it atop a bed of chewy, nutty brown rice. See? Perfectly justifiable.

Next on the docket: homemade paneer... because while I may not know what strange series of coincidences brought me and the paneer together that day, I know they're not likely to happen again.

(on the other hand, there's probably a very good chance that I'll trip over a some lutefisk lurking among the frozen shrimp or some tamarind concentrate hiding next to the bottled lemon juice next time I venture into Loblaws... anyone got recipes?)