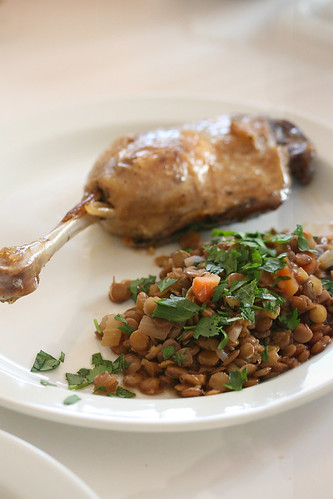 In my mind, I often refer to visits to my mother's home in Montreal as "The Pilgrimage", because they involve a long trek, and there's always some degree of penitence and self-flagellation at the end (no one does guilt like a Portuguese mother... no one).

Mostly, though, it's because The Boy and I always follow the same route around the city to worship at the altar of our favourite foods - greasy smoked meat sandwiches at Lester's Deli, chewy Montreal-style bagels from St Viateur, flaky croissants and crusty artisan breads from the various bakeries, and delicately scented teas from my favourite tea shop.

Despite the fact that our visits always seem to involve little more than dashing around the city in our quest for food, I do make an effort to cook a nice meal or two whenever we visit, if only to break up the endless string of restaurant meals.

The thing is, my mother has a terrible kitchen. I say this as someone who has rented any number of tiny low-budget apartments with makeshift kitchens, including one that had one foot of counterspace, two cupboards, and an antiquated stove with Harvest Gold finish, one functional burner and a highly temperamental oven... but not a single one of those kitchens holds a candle to my mother's. 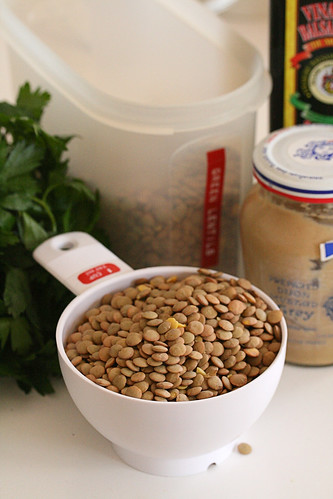 In its defence, it is a rather lovely space, decorated with a bright all-white 1980s European Modern aesthetic and filled with light from large west-facing windows.

It's only once you begin cooking anything that it becomes apparent that a terribly designed space lurks beneath that bright white veneer. The working area is crammed into one corner of the room, the counters are too high, the solid metal elements on the countertop range take forever to heat up or cool down (and invariably burn the contents of any pot left unstirred for more than a minute), and the tiny wall oven's controls are labelled with cryptic symbols that only a German minimalist can interpret without a manual. On top of that, there isn't a single sharp chef's knife to be found (on the other hand, if you happen to need three grapefruit spoons, a rolling pin, a turkey baster and an egg separator, you're in luck).

I'm always a little uncomfortable cooking in someone else's kitchen, but in hers, it's no wonder that I end up downright frustrated.

So when we dropped by for Easter Weekend this year, I figured I'd keep it simple. Nothing fussy. Just good food, good wine and a nice conversation. 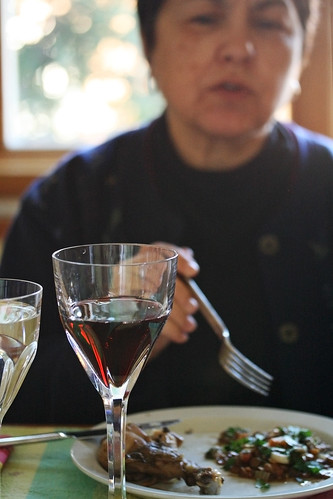 We started with some ready-made duck confit legs my mother had picked up at the supermarket. I've had duck confit a million and one ways, mostly because The Boy can't resist ordering it whenever it shows up on a menu - served whole with foie gras and black bean sauce, tucked into ravioli wrappers, stirred into cassoulet, tossed into salads, and shredded in a most delectable potato hash.

One particular rendition stood out in my memory, though - a simple pan-seared leg served atop a ragout of braised lentils, earthy and sweet and perked up with balsamic vinegar as a tangy counterpoint to the richness of the duck. It was an utterly simple and rustic dish, and yet still rather elegant simply because duck confit was involved.

So that's exactly what I made, in my mother's terrible, awful, no-good kitchen. A pot of brown lentils braised in the dregs of a box of red wine that was past its prime, three legs of duck confit browned and crisped beneath a tiny little broiler, and a colourful salad of spinach, red pepper and hearts of palm. For dessert, store-bought organic pear and dark chocolate sorbets, scooped into plain white bowls.

Nothing fancy, but a lovely Easter dinner nonetheless.