You're probably wondering if I've finally lost my mind in a fit of post-wedding insanity. I mean, curry ice cream sounds about as appealing as sardines with chocolate sauce, right? Nevertheless, I assure you that I am totally in possession of my faculties. 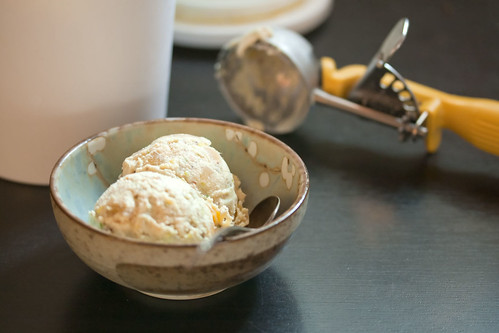 I had pretty much the same reaction when I first spotted this recipe on Cheap Ethnic Eatz as I was browsing around for a recipe to recreate for this month's Secret Recipe Club.  But the more I thought about it, the more my thoughts started to shift from ewwww to hmmmm.

So, after some deliberation, I decided I needed to make this ice cream for three reasons. 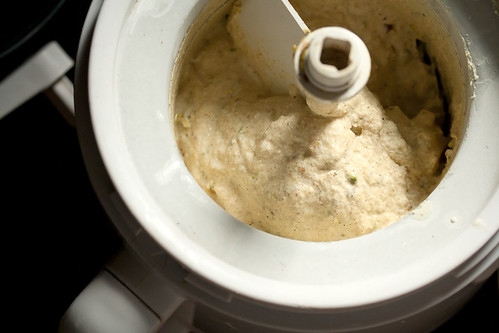 Which brings me to my third reason, which is that there's no such thing as bad ice cream. No matter what kind of wacky nonsense you try, it's pretty much guaranteed to always turn out at least somewhat edible. (Except maybe for sardine ice cream with chocolate sauce. That's just gross.) 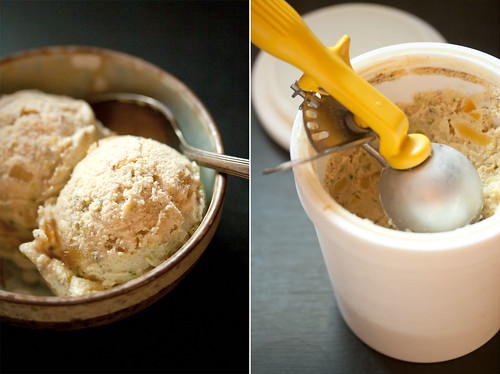 And so I took the plunge.  I tweaked Evelyne's recipe a little bit to suit my tastes, though the version you see below isn't very different from the original -  I cut back ever-so-slightly on the amount of curry and added a little ground ginger to the mix for a little kick, and also added a dab of dark rum, since I find a small dose of alcohol helps keep homemade ice cream nice and scoopable, even after a few days/weeks in the freezer (particularly in eggless recipes like this one).  Finally, on a whim, I decided to add some chopped pistachios right at the end, since Evelyne mentioned she had actually planned for this recipe to be a pistachio ice cream at first.

That first spoonful of ice cream, scooped straight for the ice cream maker bowl, blew away what few doubts remained in my mind. 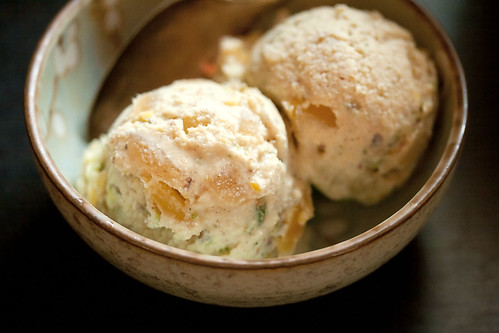 I won't lie.  The dominant flavour is unmistakeably curry, but it's kept firmly rooted in dessert territory by the sweet cream base and the chunks of candied mango, as well as the subtle background notes of ginger, cinnamon and cardamom that I normally associate with Indian sweets.

It's exotic and sweet and subtly spicy, and interesting enough to keep my tastebuds dancing right through to the bottom of the bowl. In other words, Indian take-out curry this ain't.

The moral of the story?  Sometimes it's worth taking chances on a weird pairing. especially if you might potentially get some awesome homemade ice cream out of the bargain. Oh, and Montrealers really do have super-awesome taste in food.

5.0 from 1 reviews
Curry Ice Cream with Mango and Pistachio