According to my calendar, we're already partway into August. Can you believe it? I sure can't.

Thankfully, as fast as the summer seems to be flying by, it's already been full of fun adventures, good times with friends, and lots of delicious food, so I can't really complain. 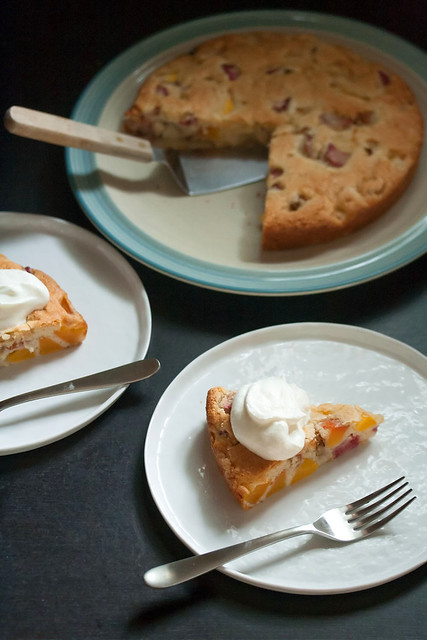 I've also been working on a few projects, which means there's also been lots of baking and cooking and writing up a storm behind the scenes. I'll be sharing all of those projects with you over the next little while, but in the meantime, it's time for some Secret Recipe Club fun, in the form of a ridiculous easy Peach Rhubarb Cake. 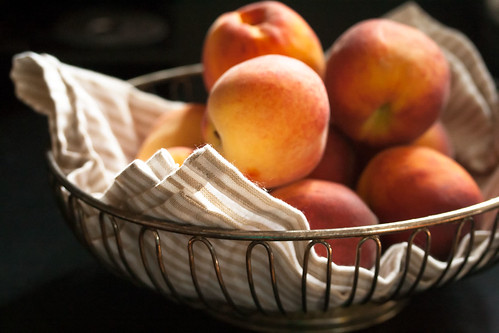 This month, my assignment is Italian in the Midwest, which is written by Pola. She describes her blog as an effort to bring authentic Italian dishes to the American midwest, which is something she's certainly qualified to do, considering she's an honest-to-goodness Italian gal.

Initially, I had planned on making one of Pola's many amazing classic Italian dishes, but as soon as I spotted Pola's recipe for Rhubarb Cake, that plan flew right out the window. For one, I was craving a simple summery dessert, and two, I had all of the ingredients I needed on hand... right down to a container of Greek yogurt in that awkward stage between big-enough-to-eat and small-enough-to-toss-without-guilt. 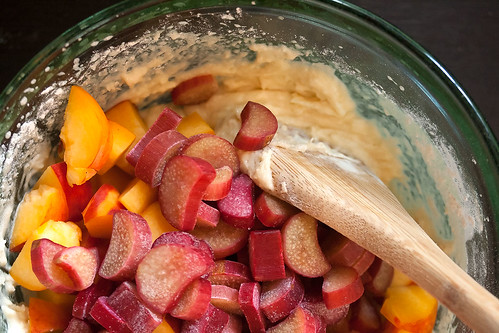 See? It's like Pola knew I'd be in this position, and created a cake just for me.

It's a perfect dessert for those perfect summer days, when the sun is shining and the breeze is blowing, and you simply can't bear to be indoors any longer than absolutely necessary.

The cake batter come together in a flash, and then it's just a matter of folding in the fruit and tossing it into a hot oven while you deal with the rest of dinner. (And don't panic when it seems like there's entirely too much fruit and not nearly enough batter - it'll all sort itself out in the oven, I promise.) 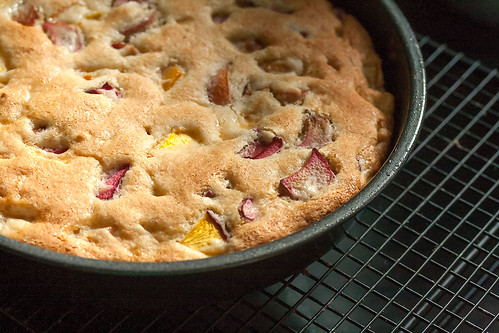 I started off following Pola's recipe pretty closely, though I couldn't help but tossing in a little vanilla extract and salt for flavour. But when the time came to add the fruit, I couldn't help myself... I'd just bought a big basket of fresh Ontario peaches, so perfectly suited for this recipe that they practically jumped into the batter on their own.

Not being one to stand between a fruit and its destiny, I decided to substitute roughly chopped peaches for half of the rhubarb in Pola's original cake.

That's the beauty of this kind of cake, you see... it can easily be adapted with whatever fruit you happen to have on hand. No rhubarb? No problem! Almost any summer fruit will do just as well - blueberries, strawberries, apricots or plums would all be perfect choices. 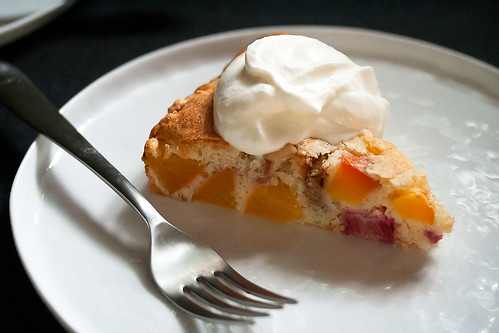 Serve it just as it is, or throw on a dollop of whipped cream if you're feeling indulgent. (Which, as you can see, is exactly how I was feeling.)