It's hard to believe it's already been a month, but yes, it's Secret Recipe Club time again!

My assignment for December is Culinary Adventures with Cam, a blog by Camilla, a scuba-diving, jewelry-making, photo-taking mama  from the Monterey Bay area. 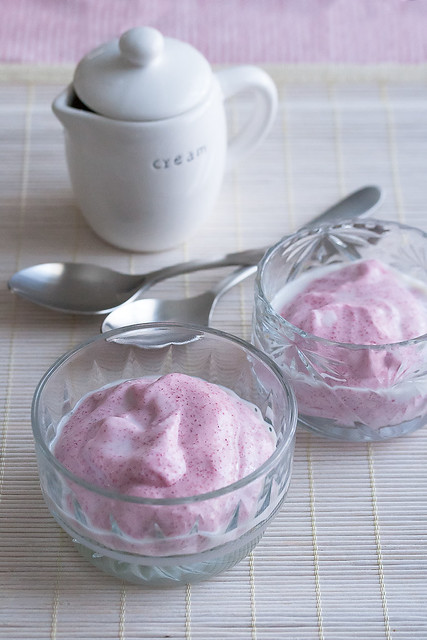 I've been reading Cam's blog for a while, after first discovering it through past SRC reveals.

I admire her knack for finding interesting flavour combinations (this delicious-looking Salted Fennel Pollen Shortbread), her seriously ambitious dinner party menus (I mean, look at this masterpiece of a Thanksgivukkah menu!), and her willingness to try new cuisines, no matter how obscure or unfamiliar they might be (did you even know there's a place called Kiribati, let alone what they eat there? Because I sure didn't.)

Despite all that reading, I still hadn't gotten around to cooking any of her recipes yet. So I guess this was the universe's way to fixing that little oversight. 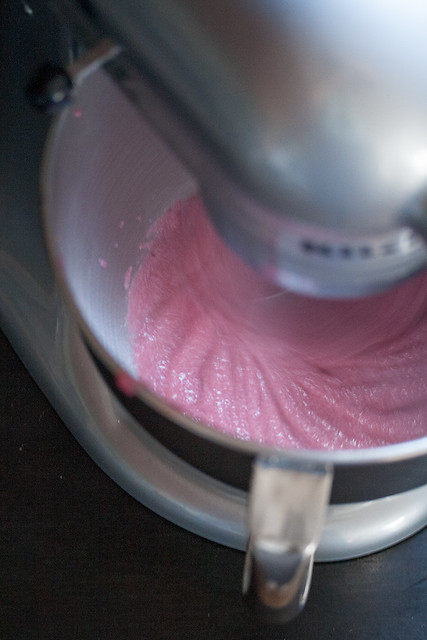 Cam has literally thousands of recipes to choose from in her archives, but the one that really caught my eye was the Latvian Debesamanna.

Debesmanna is a traditional Latvian dessert. The name literally translates to "celestial farina”, which is a pretty accurate description, if you ask me!

Believe it or not, this fluffy cranberry mousse is made from just three ingredients - cranberry juice, sugar and cream of wheat cereal (aka farina). These three ingredients are cooked together on the stovetop, and then whipped for several minutes with a stand mixer as they cool. The mixture starts off as a dark magenta sludge, but eventually whips up into an airy cotton-candy-pink cloud.

If you're not a fan of cranberries, you can also take a more untraditional route and substitute with any tart fruit juice or puree. Strawberry, cherry, blackberry and pomegranate would all work, though the colour of the finished mousse will shift depending on what kind of fruit you use. 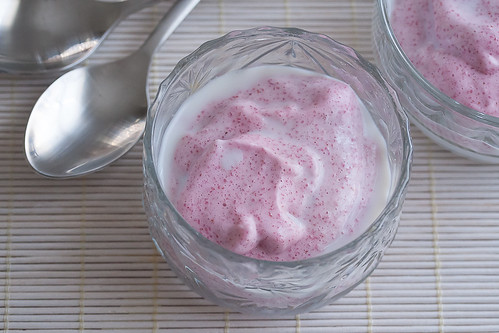 The Importance of Gluten

Cam adapted her recipe to use rice cereal, but I decided to switch back to the traditional cream of wheat for my version.

Not that I have anything against rice, but the magical transformation in this dessert owes everything to gluten. It creates elastic strands that catch and hold the air as it's being whipped in, much like the proteins in egg whites or the fat in whipping cream. Without it, the mousse will never achieve the same kind of fluffy texture.

And yes... the mousse really does come out that brilliant shade of princess pink!

(Honest, the colour in these photos is entirely un-retouched.) 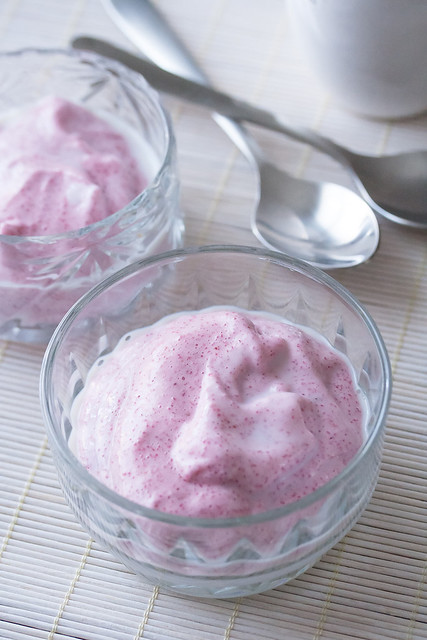 It's a surprisingly delicious dish, and totally unlike any dessert I've ever had before.

The airy texture is nothing at all like the stodgy cream of wheat we all know and (kinda sorta) love, but paradoxically it still feels substantial and filling. It's sweet and tart all at once, and the traditional splash of milk adds a cool creaminess to temper the tangy cranberry flavour.

I suppose a dollop of whipped cream on top might also be rather nice, if you wanted to dress things up. However, I much prefer the simplicity of milk, particularly if you want to follow Cam's advice and gobble it down for breakfast.

I mean, when you think about it, as pretty and fluffy and pink as this dish might be, it's still just cereal with fruit juice and a splash of milk. Right? :) 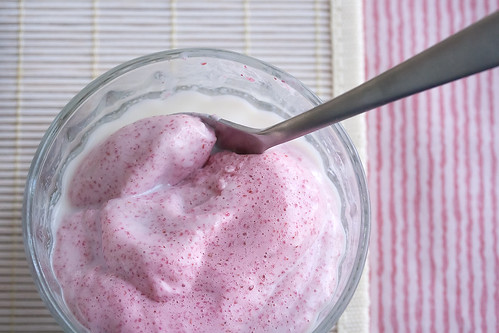 This traditional Latvian dessert is so airy and light, you'd never guess the key ingredient is stodgy cream of wheat cereal.