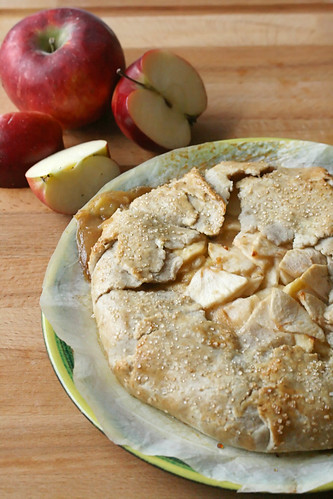 If apple and walnut were teenaged girls, they'd probably spend hours on the phone each night talking about absolutely nothing, and have regular sleepovers so that they can braid each other's hair and talk about boys. They'd be, like, BFFFs... because just one Forever isn't enough for this kind of friendship.

Then, along came dulce de leche. Apple was immediately smitten, leaving poor walnut feeling a little left out. With dulce de leche being so lusciously rich, smooth and sweet, is it any wonder that apple fell head over heels for this South American dreamboat? This twosome is almost as good together as apple and walnut are, albeit in a totally different sort of way... dulce de leche's unabashed sticky sweetness is a perfect match for tart, crisp apples. 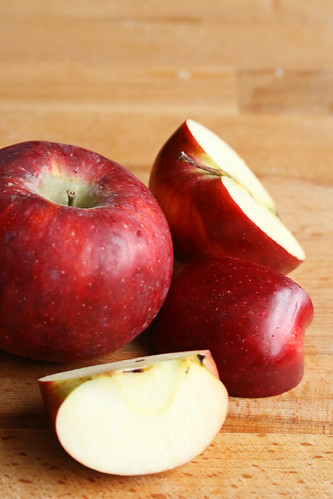 I know they say three's a crowd, but when it comes to this rustic little galette, I think walnut and dulce de leche can learn to get along... for apple's sake, anyways. Mind you, it probably helps that there's a little whiskey in there to encourage everyone to mingle.

It's sweet, it's sticky, just a little bit nutty, and not fussy at all. It's got all the deliciousness of an apple pie, but with only half the work. Perfect to finish off a simple supper for your BFFs.

FYI: The crust recipe makes enough for two tarts. This way, you can divide it in half so that you can have one galette right away, and then freeze the second half (tightly wrapped in plastic wrap and a zip-seal baggie, natch) to make another galette anytime within the next month. My prediction? You'll probably end up making that second galette within the week.

Combine walnuts, flour, sugar and salt in a food processor. Pulse until the walnuts are very finely chopped. Add butter, and continue pulsing until the mixture looks crumbly, like coarse meal.
Turn out into a mixing bowl. Stir in the walnut oil, then begin adding water 1 tbsp at a time and stirring until the dough begins to come together. Divide the dough into two equal parts. Gather each half into a ball, then flatter into a disc. Wrap tightly with plastic wrap and chill for at least an hour.
Once the dough is well chilled, unwrap one of the discs and place on a sheet of parchment paper. Roll out into a 12" circle.
Preheat the oven to 450F.
In a large mixing bowl, combine the apples, sugar, flour and whiskey. Stir until combined.
Spread out the dulce de leche onto the prepared crust, leaving a 3" border untouched around the edges. Top with the apple filling, spreading out into an even layer to cover the dulce de leche (if you want to be fancy, you can also fan out the slices in concentric circles over the dulce de leche to make it look prettier).
Using the parchment paper as an aid, fold in the edges of the dough to encase the apple filling, pinching any gaps or tears closed to keep the filling contained during the baking process. Gently transfer to a baking sheet. Brush the top of the pastry with egg wash, and sprinkle with demerara sugar and cinnamon.
Bake the galette in preheated oven for 35-40 minutes, or until the pastry is golden brown and filling is bubbly.