One of the rites of passage in any relationship is The Big Trip. It's essentially a trial by fire - can the two of you survive spending every waking (and sleeping) moment together in a faraway land, or will you crack under the pressure of jetlag, uncomfortable hotel rooms, missed buses and trains, lost luggage, and puzzling foreign customs? 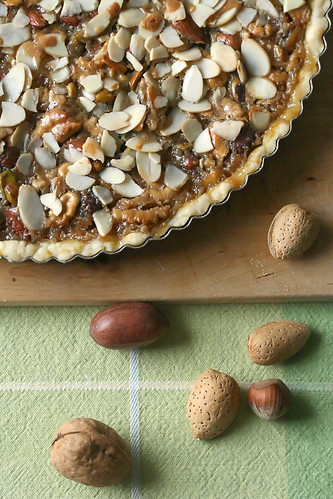 For The Boy and I, The Big Trip came a little before our first anniversary, when we decided to spend a week and a half exploring Andalusia before shooting off to Barcelona by train for a four-day stay.

Obviously, our relationship survived the trip, despite a few squabbles and misadventures along the way. After two weeks, we came home blissfully happy, bursting at the seams with wonderful memories of all the places we'd been, all the people we'd met and all the delicious Spanish food we'd eaten.

This tart is inspired by one of my very favourite memories from that trip.... It starts just a little after sunrise in Barcelona, where we'd just arrived on the overnight train from Cordoba, travelling in style in a sleeper car decked out in impeccable 1970s style, complete with burnt orange carpeting and touches of faux wood paneling. After dropping off our bags at our funky little hostale in Raval, we took a short walk through the sleepy streets and eventually ended up at the MACBA - which, as it turns out, hadn't yet opened for the day. To kill a little time, we decided to pop into a nearby pastry shop to revive ourselves with a cup of coffee and a bite to eat. 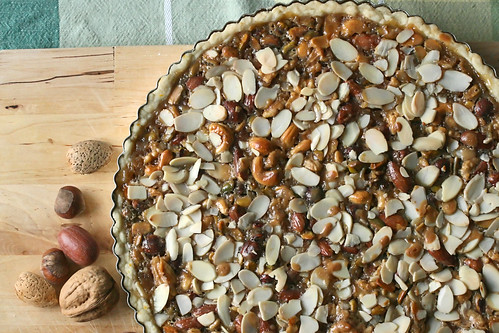 Among the dizzying array of pastries behind the counter, there was one in particular that neither of us could possibly resist - a thick slice of simple shortbread-style pastry topped by a glossy cluster of mixed nuts. Closer inspection revealed a jumble of hazelnuts and cashews and almonds and pistachios barely held together by a sticky-chewy honey syrup, a hint of orange blossom, and a buttery cookie base that was firm, crumbly and not too sweet, like a very dense shortbread. I was smitten. It was love at first bite.

I wish I'd had the presence of mind to ask if the pastry had a particular name in Spanish (or Catalan), but unfortunately I must have been too busy eating to even think of it. The only name I have for it is "That Freakin' Amazing Spanish Nut Pastry Thingie", which doesn't seem to turn up any matches on Google. Sigh.

So, despite my best efforts to find a recipe for that sublime combination of chewy nuts and crisp crust, I've yet to find a perfect match. 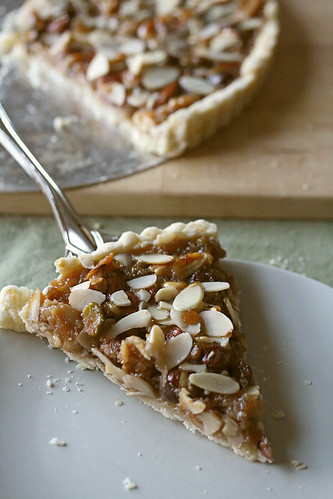 This tart is the closest I've come. It has the same combination of nuts and honey and orange blossom on a crisp shortbread crust, but the filling for this tart is gooey like a pecan pie instead of being sticky and chewy like the original. Close, but no cigar. Still, it's quite delicious in its own right, which is why I've decided to share it anyways.

Besides, I'm thinking it's time to abandon my quest. Some memories are best left where they are... in a beautiful Art Deco pasteleria on a sleepy weekday morning in Barcelona, with an undiscovered city full of marvellous things to see and do waiting just beyond the front door.

NOTE: I've also made this tart in a dairy-free version by replacing the butter in the crust with a vegan shortening (like Earth Balance) and replacing the whipping cream in the filling with a vegan creamer (I used Belsoy). Aside from a slightly crumblier crust, it's surprisingly similar to the dairy version! 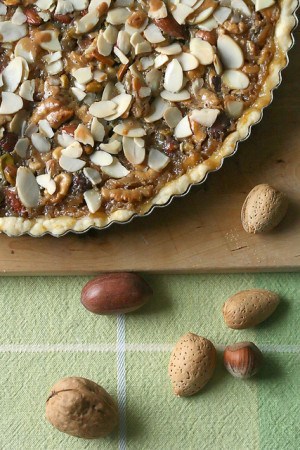