Guess what time it is?  OK, so the title of the post kind of gave it away already, but yes... it's Secret Recipe Club time again!

This month, my buddy is Sarah, whose blog is called The Pajama Chef.  I've visited Sarah's blog once or twice before, mostly through past SRC reveals, but this is the first time I've taken a really good look around. 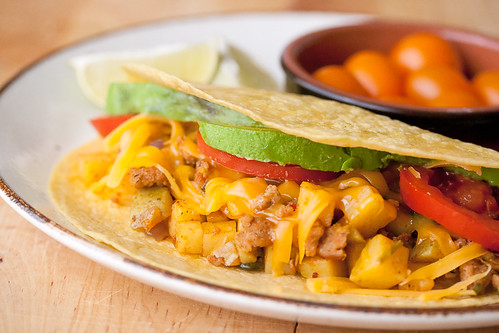 In the process of digging around for a recipe to make, I discovered a few things:

Sarah's blog has all sorts of delicious healthy recipes, with a few guilty treats thrown in for good measure. I bookmarked a few different recipes that caught my eye, including Lemony Kale Pasta, Cinnamon Rolls with Maple Icing, and Pumpkin Ginger Bread. 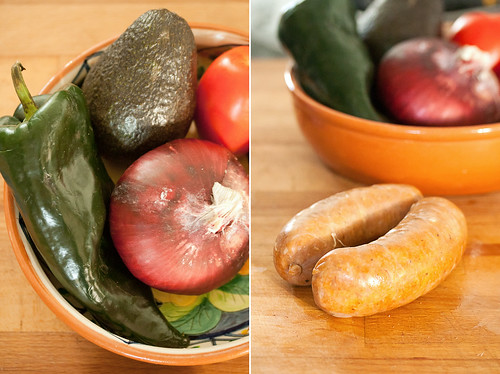 In the end, though, I decided to try her recipe for Potato and Chorizo Tacos, which is adapted from Rick Bayless' cookbook Everyday Mexican.  I was craving Mexican and it was obviously meant to be, because I just happened to have some homemade chorizo links in the freezer waiting for the right recipe to come along. 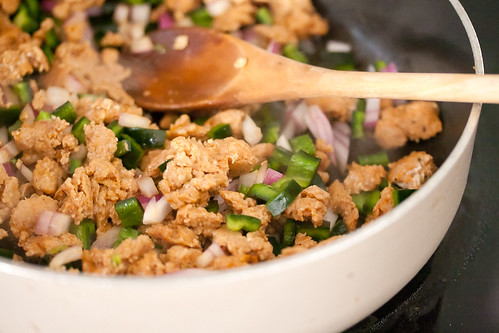 I made a few changes along the way, as per my usual habit - I used two links of chorizo (since that's what I had on hand), swapped out the green pepper for poblano (since I happened to find some at the store and figured it would be a good addition), and finely diced the potatoes instead of grating to get a chunkier texture.  The filling was pretty damn delicious as it was, but it seemed like it was missing a little something, so I also ended up stirring in some smoked paprika to give that extra oomph it was lacking. 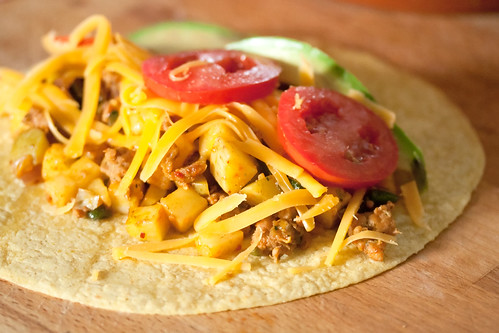 I also omitted cilantro this time around, but only because the grocery store had been cleaned out of every last sprig of the stuff.  I have, however, left it in the recipe because I firmly believe a big pile of cilantro makes almost everything better (except chocolate cake and oatmeal). 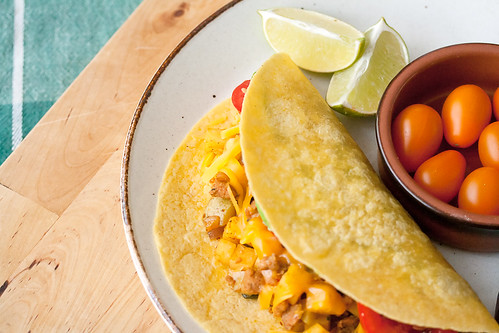 So obviously, I can't really speak for the original, but hot damn, were these ever good!  This just might be my new favourite homemade taco filling, as a matter of fact.  I don't know what I like more - the fact that the filling came together in almost no time at all, or the fact that the combination of potato, chorizo and poblano is insanely good.  Whatever it is, The Boy and I seriously considered having seconds, even though we were already stuffed to the gills.

(Come to think of it, that might explain why Sarah said the recipe only serves 2 to 3... because if you manage to restrain yourself to one generously-filled taco per person, you should theoretically get 4-6 servings.)

Thanks for a great dinner, Sarah!