Has it really been a whole month since the last installment of Secret Recipe Club? Eeesh. I don't know about anyone else, but these past few weeks have just flown by in a blur of activity.  I still can't believe we're already a week into November!

This month, my SRC assignment is Lesa and her blog, Edesia's Notebook.  Lesa is a busy stay-at-home-mom of two from Michigan, and her blog is chock-full of recipes for quick, easy and creative weeknight meals, including a bunch of really interesting slow cooker recipes that had me itching to dust off my long-neglected crockpot (she's even got recipe to make sandwiches in the crockpot, believe it or not!). 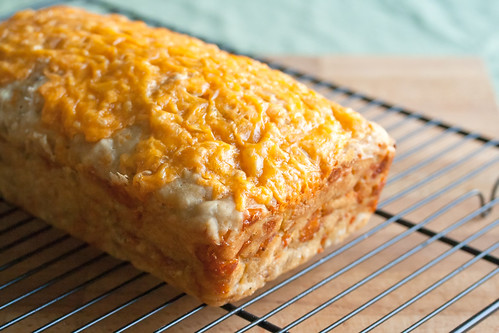 After poking around Lesa's blog for a bit, I decided to save the crockpot recipes for another day, because I really wanted to try the recipe for a savoury Apple Cheese Beer Bread that had caught my eye.

It was a pretty easy choice, to be honest.  For one, I'm on a total apple kick right now, and I've yet to meet a savoury quickbread I didn't love. Plus this bread has cheese. And beer. Seriously, how could I pass up this recipe? It's got my name written all over it! :) 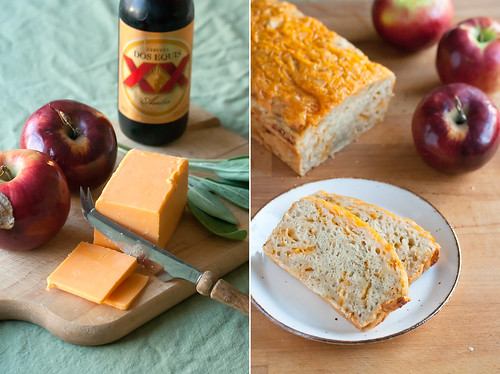 As always, I made a few changes as I went along - I doubled the amount of grated apple, added a little garlic, pepper and fresh sage to the sauteed apple mixture to give it a little extra flavour, and topped the loaf with a sprinkling of shredded cheddar partway through baking to give it a crispy, cheesy crust. I also decided to make one big loaf instead of two smaller ones, but that's just because I didn't want to buy a second loaf pan (yes, I'm lazy... I admit it). 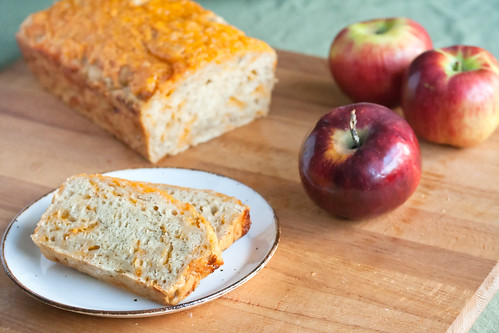 The loaf turned out beautifully tender and moist, slightly sweet thanks to the grated apple, but still savoury enough to pair with a hearty stew.  Surprisingly enough, the beer flavour is barely noticeable, despite having used a whole bottle of dark beer.

My only complaint is that the apple flavour isn't quite as pronounced as I'd like... next time around, I think I'll boost the grated apple up to 2 cups to see if I can get a more appley result without compromising the texture too badly.

That said, I'm still super-pleased with my secret recipe. We ended devouring most of the loaf with friends who came over for Sunday dinner, as an accompaniment for a vegetarian Guinness stew they'd brought along - the bread was a perfect pairing for the hearty stew, and everyone agreed that this recipe is a keeper. I'll definitely be making this one again!