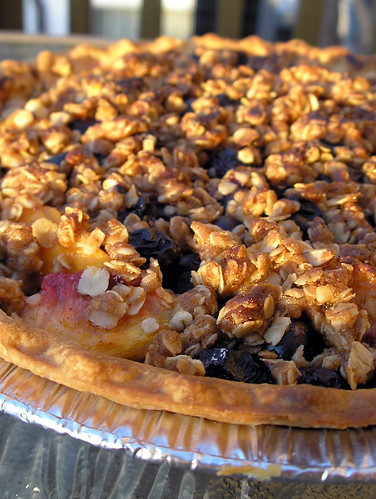 When it comes to fresh produce, August is by far and above my favourite month of all. I could easily gorge myself silly on fresh sweet corn, blueberries, peaches, nectarines and melons of all kinds, all of which are so ridiculously cheap I have to wonder why anyone would still consider getting a double-double and a donut for breakfast when they could have fresh blueberries and cream instead... not to mention that it's really the only time of year that tomatoes actually taste like something other than watery cardboard.

While I'm more than happy to enjoy the bounty of summer straight up and unadorned, sometimes a solo act can be improved by a talented backup band... so playing the Lance Bass to my fruit's Justin Timberlake, here's a slightly sweet but totally demure crisp-and-crust combo to play up a tasty medley of blueberry and peach. It's quite handy if you find yourself, like me, staring at a few peaches and a pint of blueberries that are just a bit past their peak but still perfectly edible.

If little piggy you ate all the blueberries, this works quite nicely with raspberries or blackberries (assuming you didn't scarf those down earlier before making your way over to the blueberries, of course).

Preheat oven to 375F.
In a large bowl, mix together peaches, blueberries and lemon juice. Add sugar, corn starch and ½ tsp cinnamon; mix gently to coat fruits evenly. Pour into pie crust and set aside.
In another bowl, stir together remaining ingredients to make crumble topping. Sprinkle loosely over fruit mixture (it's okay if some fruit shows through).
Bake in preheated oven for 45-50 minutes, until fruit is soft and crumble is golden brown and crisp.