Around here, you know spring has arrived when you've spotted at least two of the following: a red-breasted robin, a blooming crocus, or a package of hot cross buns at the supermarket.

The way I see it, the only purpose supermarket hot cross buns should serve is as a harbinger of spring. Like their cousin, the cheap hamburger bun, they're but a pale imitation of the real deal - fluffy, crustless and bland, existing in a perpetual state of quasi-staleness.

Short of being stranded on a desert island with nothing but packages of hot cross buns for miles around, there's no possible way I could be talked into eating one of those abominations. 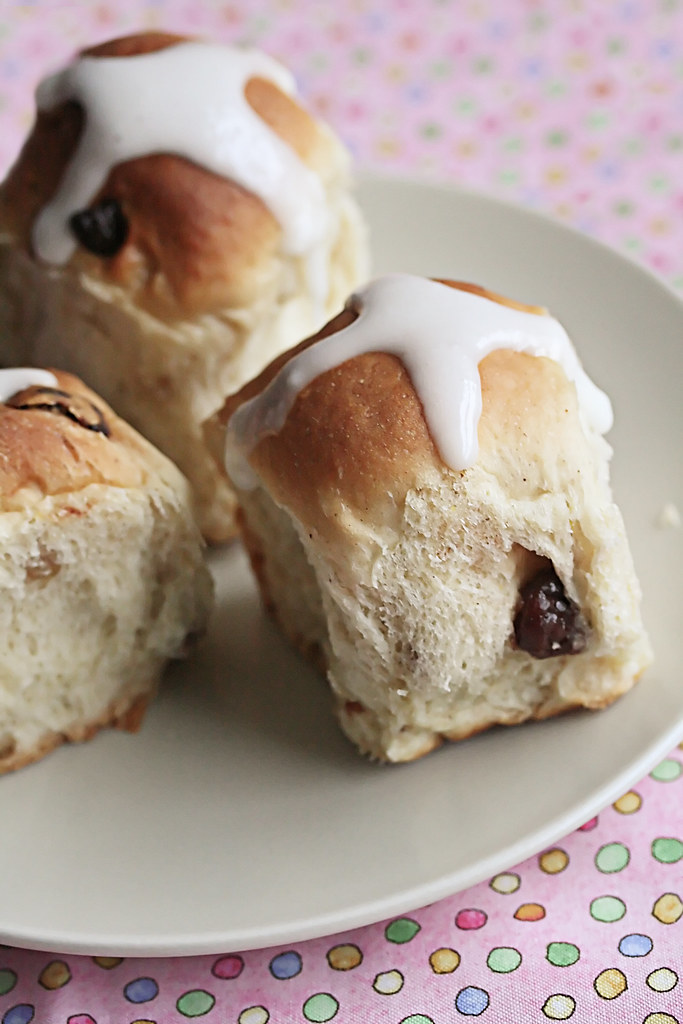 Which is why, if your idea of Easter isn't complete without a hot cross bun or two, there's really no option except to make your own. It's not nearly as hard as you'd think, though... all you need is a rainy spring afternoon and some easy-to-find ingredients to achieve true hot cross bun bliss.

This year, instead of using the traditional combo of glace fruits and currants, I decided to give my buns a makeover by using dried cherries and lots of lemon zest lemon zest. I'm quite pleased with the results -they're tender and rich and not too sweet, just like a hot cross bun ought to be, but the lemon and cherry give them a light tangy flavour that's perfect for spring.

In fact, there's no need to restrict these tasty treats to Easter alone. They'd fit in perfectly as part of a non-denominational spring brunch or tea party... instead of piping on the traditional x-shaped icing cross, just drizzle the icing overtop in a more random pattern or serve without any icing at all.

Note: If you'd prefer to go the more traditional route, just make the following changes - replace the cherries with an equal amount of currants or raisins, use a glace mix or mixed peel instead of candied lemon (or leave out altogether), and add ¼ tsp each cloves and allspice.