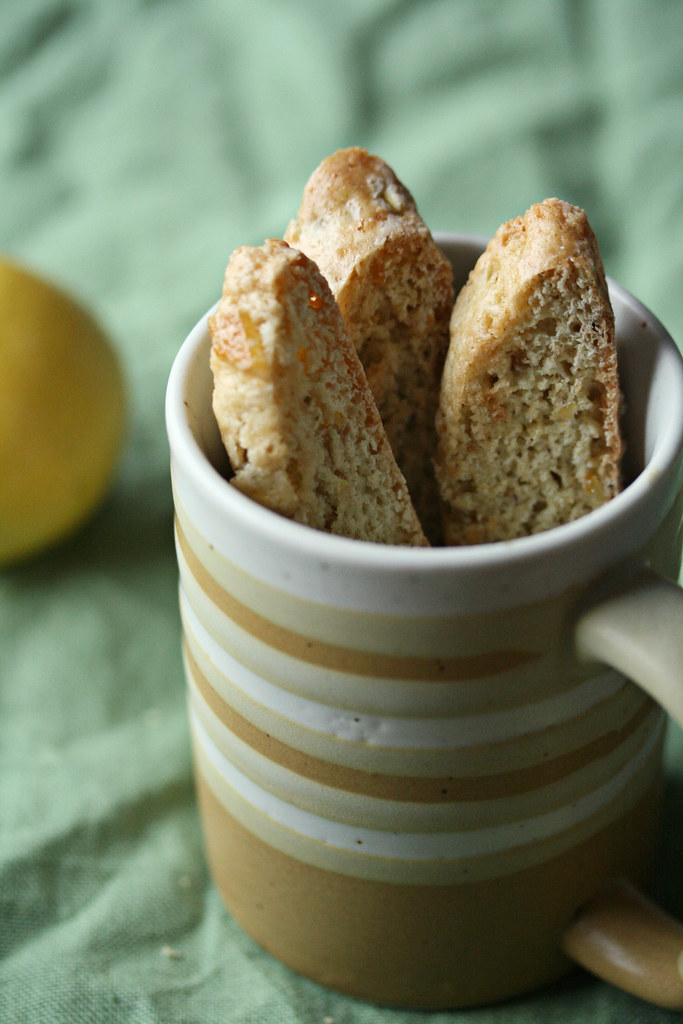 Spending an entire day baking cookies is easily the best part of my holidays. Besides the fact that the house smells incredibly delicious for an entire weekend (along with a weeknight or two, if there happen to be many cookie recipients that year), it's an opportunity to play around with interesting new recipes... after all, I'd hate to give someone the same cookies they got the year before.
This year's cookie-baking frenzy consisted of two very different cookies - soft chewy Mint Chocolate Crackles and these crisp light Lemon, Ginger and Pistachio biscotti.

I have to say my favourite was definitely the biscotti. One of my coworkers described them as "unreal" (which is a compliment... I think), but no matter how you slice it, they're absolutely delicious dunked into a mug of citrus-scented black tea.

Because I'm a masochist (and also because I happened to find a bag of Meyer lemons at the store earlier this month), I decided to candy my own lemon peels rather than buying store-bought. I find that the lemon flavour of the biscotti was slightly more intense, especially with Meyers as opposed to regular lemons, though the ginger and pistachio still held their own.

However, if you're not quite as obsessive as I am about making everything yourself, you can also sub store-bought candied lemon peel as a shortcut - it's relatively easy to find, even once the holidays are over.

Preheat oven to 350F, and line a baking sheet with parchment paper.
In a large bowl, combine flour, sugar, baking soda, ground ginger and salt. Stir until evenly combined. Add the pistachios, crystallized ginger and candied lemon, and stir to distribute evenly throughout the flour mixture.
In a small bowl, whisk together lemon juice, zest, and eggs until frothy. Pour into the dry ingredients and combine until you have a loose, crumbly dough. Turn out onto a clean surface and, using hands, knead lightly until you have a soft, cohesive dough.
Divide dough into two halves. Shape each half into a 9" long log, and place on the prepared baking sheet, leaving 6" between the two logs. Gently flatten each log to about 1" thick.
In a small bowl, whisk together water and egg white. Brush over the rolls, and top with a sprinkling of sugar.
Bake the biscotti in preheated oven for 20 minutes, or until just barely browned. Remove from oven and set aside. Reduce oven temperature to 325F.
Once biscotti are cool enough to handle, cut into ¾" thick diagonal slices using a serrated knife (you should have ~ 36 slices). Arrange the slices on the baking sheet, cut side up, and return to the oven to bake for 15 minutes or until crisp and lightly toasted.
Set the biscotti on a wire rack to cool completely, then pack in an airtight container. If stored in a cool dry spot, these cookies can keep for several weeks, though they'll probaby get gobbled up much faster than that.