Inspiration can be a funny thing, sometimes.

Random flavour combinations have a habit of getting stuck in my head, rattling around in my brainpan until they blossom into full-blown cravings, sometimes transforming along the way into something quite different than the original inspiration. 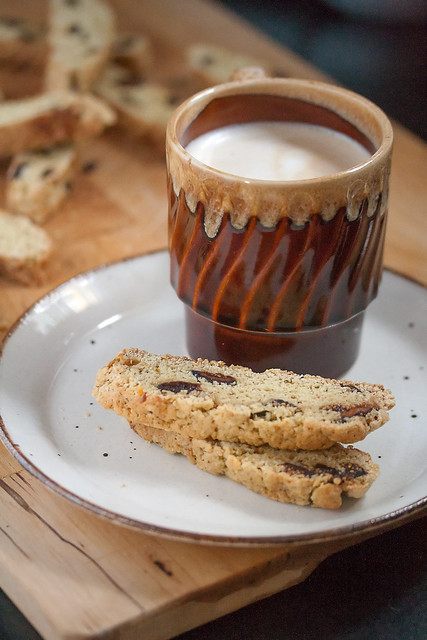 Take these Fig and Black Pepper Biscotti, for example.

It all started with a gorgeous Fig and Black Pepper Latte that the de-lovely Kris at 80twenty posted on her blog just a few short weeks ago.

Into my head it went, bouncing along my synapses, evolving as it went from Kris's soothing creamy latte to crisp biscotti dotted with chunks of fig and just the subtlest dash of black pepper. 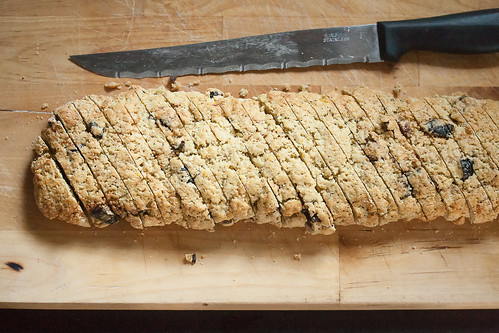 Why biscotti, instead of all the other possibilities my work-addled brain could have dreamed up? Damned if I know.

What I do know, however, is that this may be the only biscotti recipe I ever make from now on, because it's a positively brilliant combination of flavours. 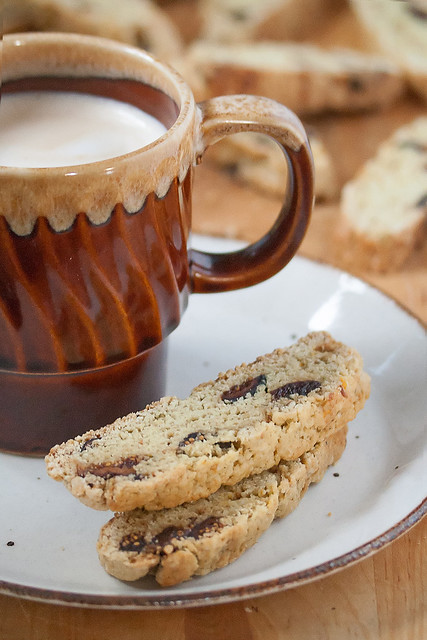 Part of the reason that the combination works so well is that biscotti dough is something of a blank canvas when it's stripped down to its most basic components of flour, sugar, baking soda, salt and egg, which means that the real star of the show is all the other stuff that gets mixed in.

In this case, that means it's all about the almost-savoury blend of orange zest, crushed fennel seed and black pepper that flavours the dough, contrasting against the natural honey-like sweetness of the Black Mission figs. 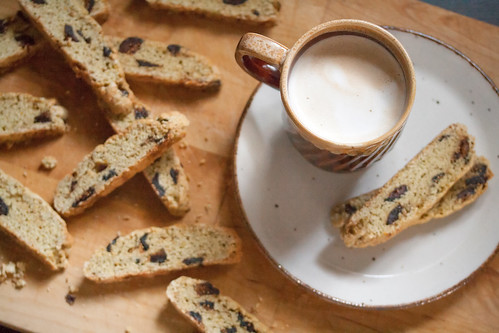 The resulting cookies are wonderfully crisp (all the better to go with a strong espresso), and subtly spiced with a gentle peppery heat that first hovers on the edge of awareness before building up to a warm tingle. They're not spicy, per se, so much as they are spiced.

I've yet to get around to trying that Fig and Black Pepper Latte, but if it's half as good as the cookies it inspired, it's gotta be worth it. (Especially if I manage to save a couple of these biscotti to dunk in it!)

These biscotti pair the natural sweetness of black mission figs with the gentle warmth of black pepper in a crisp dunkable cookie.

Welcome to the last day of Cookie Week, hosted by Kim of Cravings of a Lunatic and Susan of The Girl In the Little Red Kitchen! We’ve teamed up with 10 other talented bloggers to bring you five fantastic days of cookie recipes to get you in the holiday spirit.  We hope you've enjoyed this week as much as we did.

Take a look at today's posts for nine great reasons to bust out the butter and sugar this weekend: