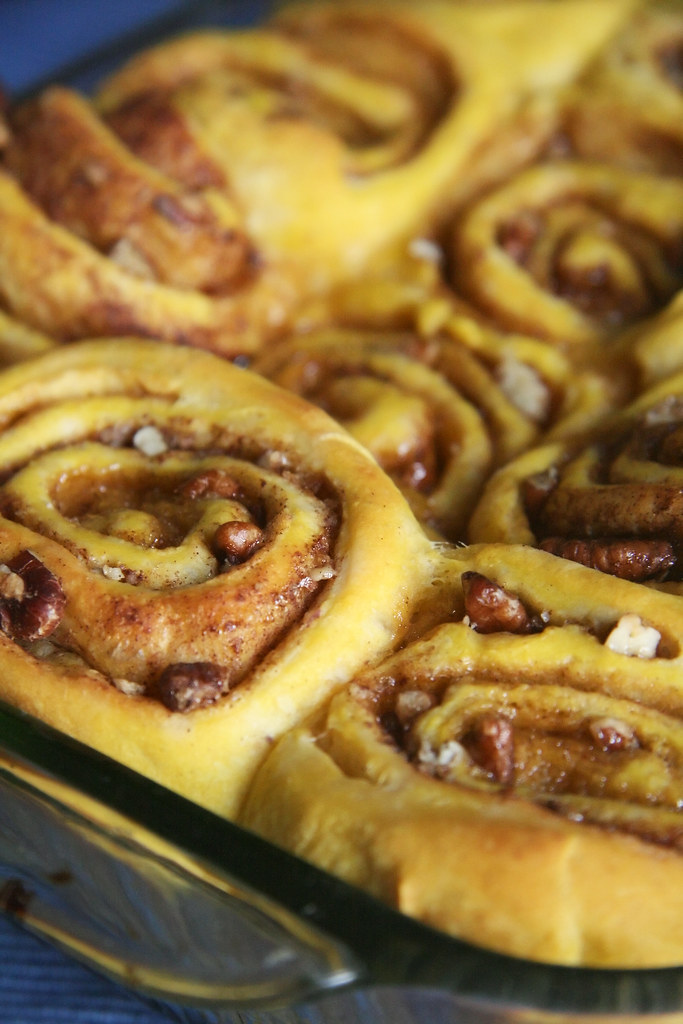 I had a lovely post all ready to go about how pumpkin and fall go hand in hand, but I got distracted and let it sit around for a while... and in the meantime, mean ol' Mr Winter decided he'd sneak in through the back door to pay us a visit.
At this very moment, there is a good inch or two of snow on the ground and it doesn't seem to be going anywhere. In fact (much to my dismay), we're scheduled to get another few inches over the course of the next week. It seems that fall is most definitely gone, taking its colourful foliage, crisp breezy weather and never-ending variety of gourds along with it. Sniff.

However, this post is just in time for our 'Murican neighbours' Thanksgiving feast and you can't have Thanksgiving without pumpkin, so I suppose at least that counts for something.

In fact, these make a wonderful Thanksgiving breakfast, which is exactly how we ate them. Simply start the rolls the night before - once you have them assembled and in the pan, just cover tightly and place in the refrigerator. When you wake up in the morning, remove the pan from the fridge and leave out for about 45 minutes (the second rise will take longer because the rolls will still be cold). From there, just bake as per usual and wait for the smell of cinnamon to waft through the house.

We ate them unglazed because The Boy prefers his cinnamon buns on the not-so-sweet side... but if you've got a sweet tooth and can fend off starving hordes of breakfasters long enough to allow the buns to cool slightly, then by all means, drizzle with caramel icing before serving.

To prepare the buns, dissolve yeast in warm water in a small bowl; let stand for 5 minutes. Mixture should be foamy (if not, your yeast is no longer good - toss it out and start again with a fresh packet).
In a large bowl, mix together 2 cups flour, pumpkin, milk, melted butter, sugar, salt, and spices; stir in yeast mixture and continue stirring until evenly mixed. Turn dough out onto a floured surface. Turn out onto a floured surface and begin kneading; as you go, add the remaining ¾ cup of flour, 1 tablespoon at a time, until the dough is soft and elastic (it should feel a bit tacky, but shouldn't stick to your hands).
Place the dough in a large bowl that has been lightly oiled, turning to coat top. Cover and let rise in a warm draft-free place for 45 minutes or until doubled in size.
Meanwhile, prepare the cinnamon filling by stirring together the softened butter, brown sugar, vanilla extract and cinnamon in a small bowl until smooth. Set aside.
Punch dough down; cover and let rest for 5 minutes. Roll the dough into a 12 x 10-inch rectangle on a floured surface. Spread the cinnamon mixture in a thin layer over the dough and sprinkle evenly with the chopped pecans, if using.
Roll up the rectangle tightly, starting with a long edge, pressing firmly to get rid of any air pockets; pinch seam and ends to seal. Cut roll into 12 (1-inch) slices. Place slices in a lightly buttered 9-inch square pan. Cover and let rise 25 minutes or until doubled in size.
Preheat oven to 375°. Bake rolls for 20 minutes or until golden brown. If frosting, allow to cool for 15 minutes before drizzling with Caramel Icing.

In small saucepan, heat butter until melted. Stir in brown sugar and milk; cook over medium low heat 1 minute. Transfer to small mixer bowl and set aside to cool.
Once cooled, stir in vanilla, salt, and confectioners' sugar. Beat with electric mixer until well blended, adding more confectioner's sugar as needed until desired consistency is reached.