I first discovered crema catalana in a trendy tapas bar in Barcelona. Our waiter announced its arrival with a dramatic rolling "r" (so that it sounded something like "crrrrrrrrrema catalana") and a flourish of his arms, before setting down on the table a simple terracotta ramekin of custard topped with a shell of caramelized sugar.

I was a little dubious at first, despite our waiter's showmanship. This looked far too much like an ordinary, run-of-the-mill creme brulee - and while I'm a big fan of creme brulee, I hadn't travelled all the way to Spain to eat something I'd already eaten a hundred and one times before. 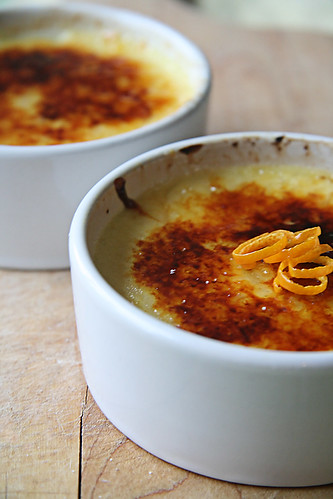 Thankfully, my dismay only lasted as long as it took to tap my spoon through the hard shell of burnt sugar.

Being wrong as never so delicious as that first bite of creamy custard laced with shards of broken caramel. It was sinfully rich, subtly spiced with vanilla and cinnamon, and scented with the barest hint of citrus. This was to creme brulee as Scherezade is to Reading Rainbow - similar, perhaps, but a million times more exotic.

I fell head over heels in love on that sultry Spanish evening, and much to my delight, it turned out that I wouldn't have to hop the next flight to Barcelona the next time I got a craving - as it turns out, all the ingredients I need to assemble a crema catalana are usually found kicking around in my cozy Canadian kitchen.

(Not that I'd mind an excuse to go back to Spain, of course, but my paycheques aren't quite large enough to accomodate regular transatlantic voyages.)

The best way to get an evenly caramelized layer of sugar on your crema catalana is to use a mini blowtorch, which you can buy from most kitchen supply stores. However, if you don't want to channel your inner pyromaniac or don't have room for another gadget in your kitchen, just place the custards on a baking tray directly under a hot broiler for just a few seconds - just make sure you watch them like a hawk, because they'll go from golden to charred in an instant!

Spain's answer to creme brulee, Crema Catalana has a subtly sweet custard scented with citrus and cinnamon under a crunchy layer of caramelized sugar.