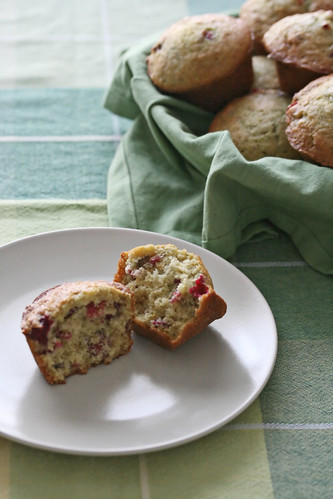 We recently had one of my old high school friends over for brunch, along with her husband and her son (who shall be referred to as Gnat going forward).

Gnat is two, and is very talkative, very active, and very rambunctious... basically, a fairly average two-year-old boy. He was utterly fascinated by our cats (both of whom decided it might be a good idea to disappear for a few hours, lest the small human with grabby hands make more loud noises at them), by The Boy's collection of grown-up toys, by the large colourful books on our bookshelves, and by the fact that he could race up and down our staircase.

But most of all, Gnat was very, very interested in the basket of muffins I had made. When his shouts of "Muffinmuffinmuffinmuffin!" to the grownups around the table didn't yield any results, he decided that he'd cut out the middleman and sweet-talk the muffins instead... which is when our toddler Romeo reached out his arms to his pastry Juliet and earnestly declared "Muffin! Oh Saint Muffin!".

Now, I've heard my food called lots of things before (Slashfood even called my stuffed eggplant recipe "deliciously clever", which was ever so flattering)... but sainthood is a definite first, which is why I've decided to call these Oh Saint Muffins! forever more. I'm a firm believer that a funny name can make an otherwise mundane dish taste that much better, after all (see: Welsh rarebit, cock-a-leekie soup and kedgeree)

Also, I plan to embarass Gnat thoroughly with this story when he's a sulky teenager who hates everything, including muffins.

(As it stands, Gnat will have plenty to be embarassed about someday... one of the first words his parents taught him to say was "Tardis", and they have the whole thing on video. I think it's their revenge for all the sleepless nights they endured.)

Preheat oven to 400F. Lightly butter a 12-cup muffin tin, or line with paper liners.
In a large bowl, combine flour, baking powder, baking soda and salt.
In a separate bowl, cream together sugar and butter until light and fluffy. Add egg and beat until smooth. Stir in the orange zest and juice, milk and vanilla extract. Add in the dry ingredients, along with the chopped cranberries and pecans, and stir until just barely combined.
Distribute batter evenly between the prepared muffin cups. Bake in preheated oven for 18-20 minutes, or until tops are puffed and golden brown, and a toothpick inserted into the centre comes out clean.