Hurray! It's time for another installment of the Secret Recipe Club.

This month, I was assigned to Cupcakes with Sprinkles, a blog by Meghan, a mother of three very adorable children who always saves room for dessert. As you might guess from her blog's name, Meghan mostly blogs about sweets, though she occasionally shares a savoury dish or snack to keep things interesting. 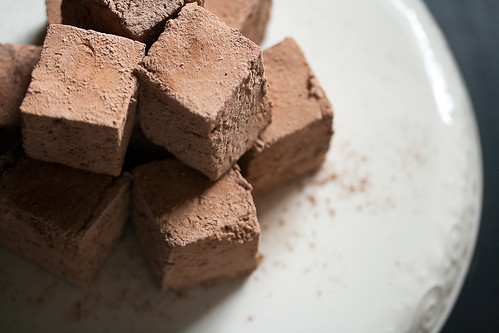 Just browsing through the archives can be hazardous if you're trying to watch your weight. There are some seriously amazing-looking recipes in there!

After debating my options, I ended up settling on a recipe for homemade Chocolate Marshmallows that Meaghan adapted from Paula Deen. I've been meaning on trying my hand at making homemade marshmallows for ages, anyway, so it seemed as good a time as any to cross them off my bucket list.

As always, I couldn't resist fiddling with the recipe, turning the basic chocolate recipe into a mochaccino-inspired version spiked with coffee and cinnamon. 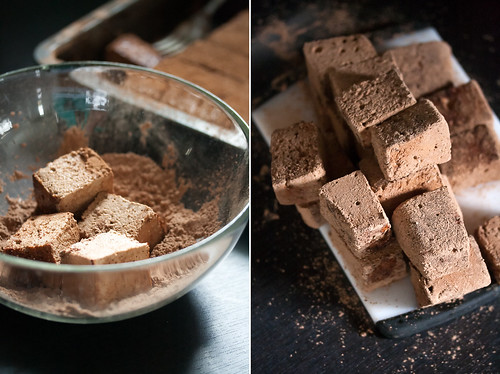 It turns out that marshmallows aren't particularly hard to make, though I did find the timing for the various components to be a little on the tricky side. (Pro tip: Go to the bathroom before you start - like with any candy-making project, once you get going, you can't take a break. Don't ask why I know this.) I'm sure it'll be much easier now that I've got the hang of it, though.

And the finished marshmallows? They're exactly as Meghan advertised - soft and fluffy and creamy, and nothing at all like a store-bought marshmallow at all (not that I've ever seen a chocolate marshmallow at the store, mind you).

As for my little tweaks, the cinnamon comes through quite clearly in the finished marshmallows, while the coffee flavour isn't really all that noticeable, though it does add a certain je-ne-sais-quoi, while the cinnamon definitely shines through. I can see these turning into a chocolate-mint marshmallow for the holidays, or going a little boozier with bourbon or rye for a more grownup twist. 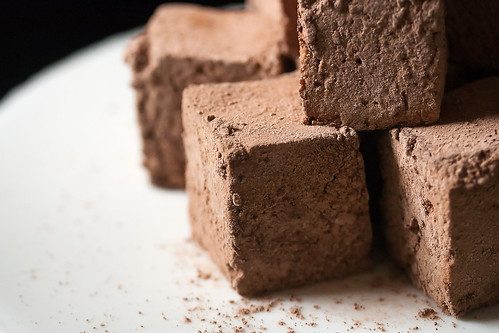 In fact, my only complaint with these is that now that I know how easy it is to make marshmallows at home, I'm going to be making them all. the. freakin'. time.

And that's kind of problem, because oh my goodness are these ever addictive. The leftovers are currently sitting in an airtight box on top of my fridge, and every time I walk by, it's all I can do not to crack the box open and shove yet another marshmallow in my mouth. In fact, I totally deserve an award for not whomping down the whole batch in less than a day.

Yes, this is definitely the beginning of a beautiful friendship.