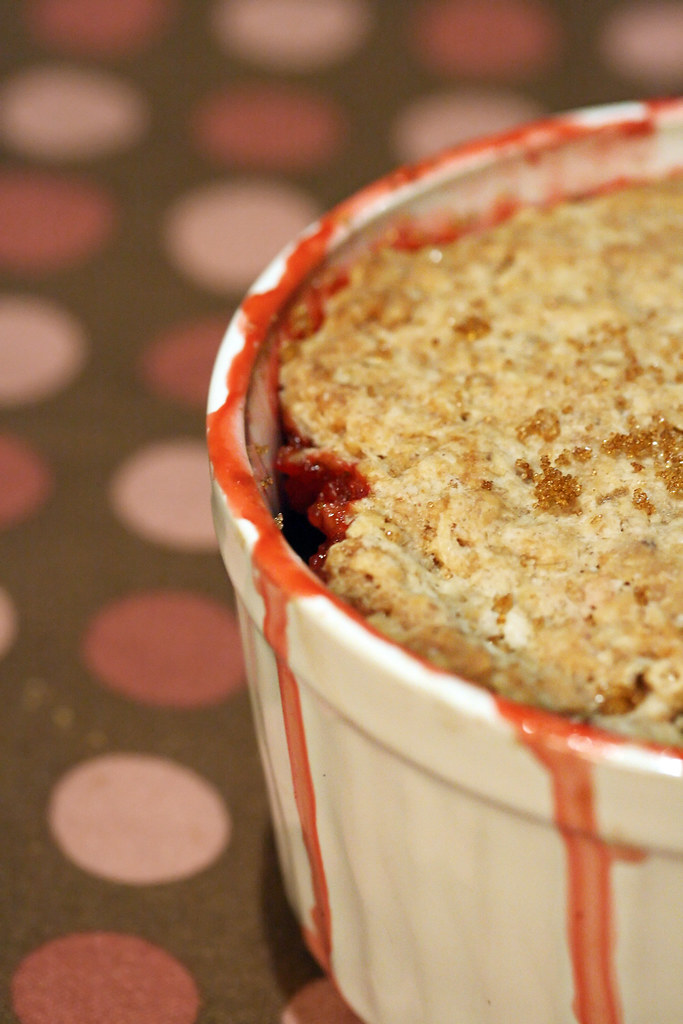 If you've been following along for the past few months, you might know that I love me some rhubarb, possibly because it's one of the first signs that spring has finally come to my little corner of the world. I always stock up as soon as it appears at the local farmer's market, and freeze bagfuls of the stuff so that I can have a little bite of spring whenever I need it.

And speaking of spring, I'm getting awful tired of winter. I'm tired of slogging to work in the cold, I'm tired of wearing my winter parka, and most of all, I'm tired of having hat head day after day (though hat head, I must admit, is better than having my ears fall off from frostbite... as my mother often reminded me as a child). I just can't wait for the snow to go away, and for the birds to come back.

Tonight, though, it's still winter, complete with plenty of wet snow to make it extra-miseraly. So to cheer myself up and remind myself that it won't be much longer before spring, I dug up the last of the rhubarb from the freezer and made myself the springiest dessert I could possibly think of - Strawberry-Rhubarb Crisp topped off with Oatmeal Biscuit Crust sweetened with just a bit of brown sugar and a dash of ginger for zing.

Of course, if you're not in a springy mood, you can easily substitute any fruit you happen to have kicking around. Plums are a particularly good choice for the oatmeal crust, as are pears or apples with some tart cranberries mixed in.

In a large mixing bowl, combine fruit, sugar, lemon juice and zest. Sprinkle corn starch onto the fruit mixture, and stir gently until fruit is evenly coated. Spoon into four 1-cup ramekins, or into a 9"x9" baking dish. Set aside.
To prepare the crust, combine the flour, brown sugar, baking powder, baking soda, spice and salt in a mixing bowl. Cut in butter until mixture resembles coarse crumbs. Add oats and milk, and stir until dough comes together.
Turn out mixture onto a floured surface, and roll out to ¾" thick. Using a floured 2" biscuit cutter, cut out four circles of dough (if using a baking dish instead of ramekins, roll out the dough into a roughly 9"x9" square instead).
Top the fruit filling in each ramekin with a biscuit. Sprinkle with a little brown sugar or a dusting of cinnamon, if you so desire. Arrange ramekins on a baking sheet and place in the preheated oven to bake for 40-45 minutes or until biscuits are golden brown and crisp. Allow to cool for 5-10 minutes if serving warm, or set aside until completely cooled if you prefer a room-temperature crisp. A scoop of vanilla ice cream is delicious, but entirely optional.