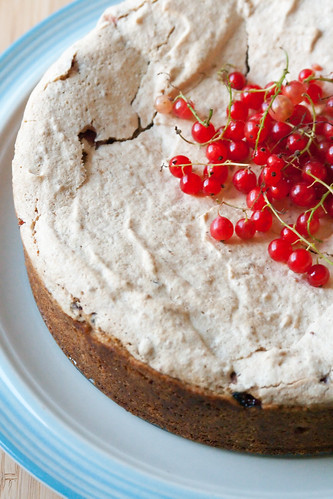 One of my neighbours has a red currant bush in their front yard.  At this time of year, it's positively dripping with bright red berries, fat little orbs that seem to glow from within when backlit by the bright summer sun.

It seems said neighbour has absolutely no idea the berries are actually quite edible (nay, delicious), because there they sit on the bush, day after day, unpicked and uneaten. It's a shame. It's entirely possible they did try a berry once or twice, only to be put off by the mouth-puckering sourness that is the predominant flavour of even the ripest of red currants... or perhaps it was those seeds that threw them off, given that they're surprisingly large for such a small berry.  Or maybe they just hate currants, which would be the biggest shame of all.

I know I should be a good neighbour and knock on their door so I can inform them of this undiscovered treasure awaiting them in their very own front yard, but I'm far more tempted to listen to the little voice in my head that suggests I ought to pick the bush bare instead and then skip home to gobble down my ill-begotten bounty. 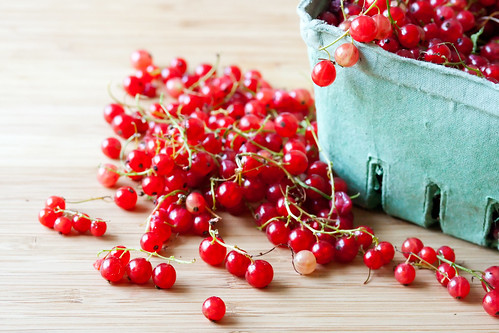 Since it doesn't pay to piss off your neighbours (or to listen to little voices in your head that tell you to do bad things), I ended up getting my fix at the farmers' market instead, forking over $8 for a large basket of red currants.  And let me tell you, it was worth every stinkin' penny. 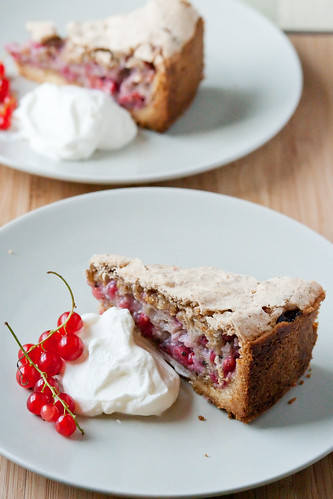 While they're rather hard to find (at least in Toronto) and carefully picking the berries off their threadlike stems is a time-consuming chore, I still firmly believe that red currants are well worth all that hassle.  The flavour is quite distinctive, somewhere between cranberry and underripe raspberry, with a sour juiciness and seeds that crunch beneath your teeth. Like cranberries, currants are also full of natural pectin and become quite jammy when cooked, which makes them an ideal candidate for making jams and jellies.

This batch, however, was destined to be baked up into this meringue-topped cake, which is based on a traditional German dessert.  The recipes I found all were based on hazelnuts or almonds, but I've opted to use some lovely California walnuts instead, which give the tart more assertively nutty flavour and a hint of bitterness that helps offset the sugary meringue topping.

It's a rather unusual dessert. It's neither pie, nor tart, nor cake, nor pudding... but it has elements of all four. The crisp shortbread-cookie crust cradles a fluffy filling dotted with red currants, which has a texture that lies somewhere between a really firm pudding and a really soft, falling-apart-moist cake, and loads of little currant seeds that crunch under your teeth. The real appeal, though, is a toasted walnut meringue topping that shatters as you slice into the cake, and melts on the tongue in a wisp of sticky sweetness. 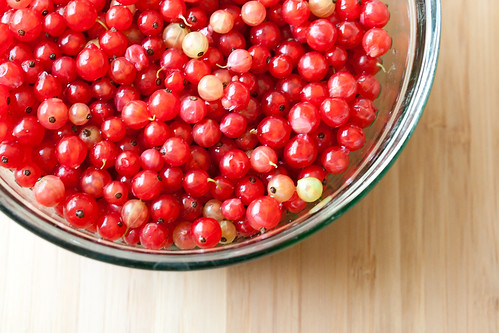 The only catch is that this is also a cake that must be eaten on the day it is made. Leftovers will last for another day or two, but the moisture of the currants will begin to weep into the meringue topping and cookie crust, slowly robbing them of the delicate crispness that makes them such a wonderful counterpoint to the fluffy filling.

Best to save it for a special occasion, when you've got guests you want to impress - your future mother-in-law, your cranky boss, or a wealthy childless relative... or maybe even a certain neighbour whose red currant bush you've been oogling for the past four years.